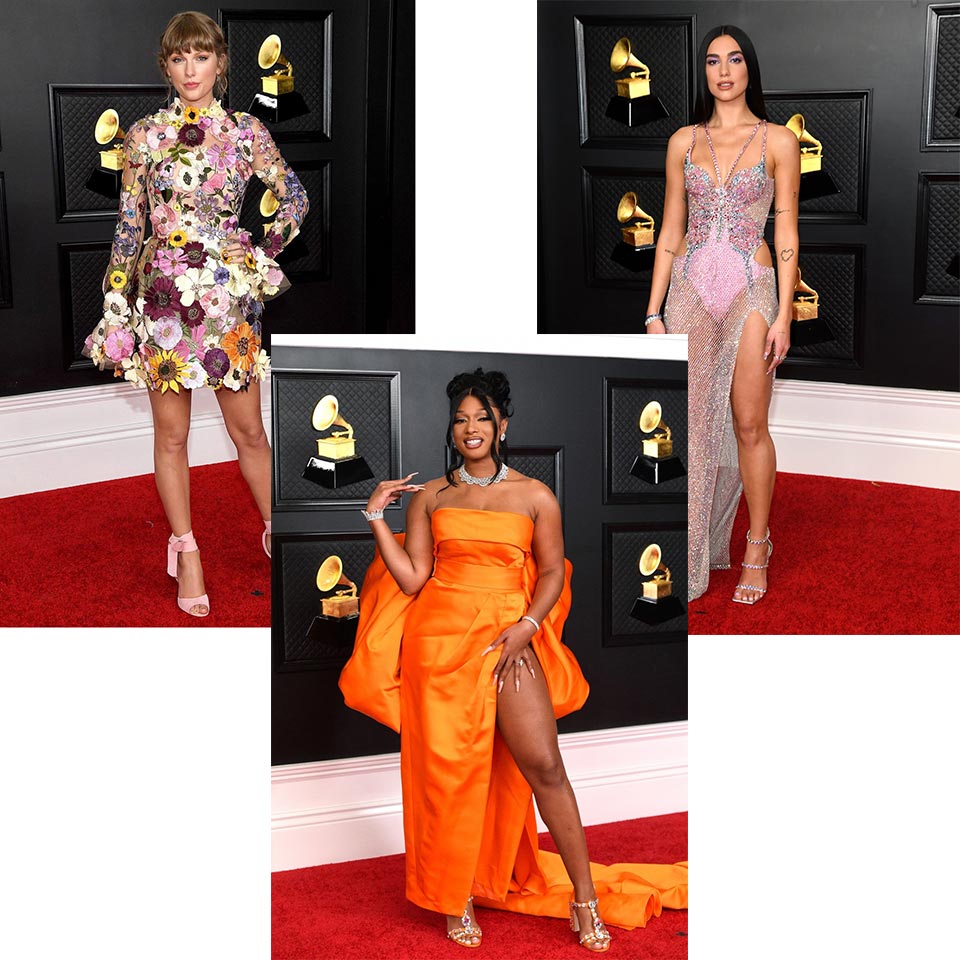 The 63rd Grammy Awards took place at the Staples Center in Los Angeles. One of the most influential musical events and the long-awaited social event was held in a hybrid format: some of the guests attended the ceremony live, others watched the events on the other side of the screen live. However, this did not stop all guests (some even virtually) from walking their festive outfits and decorations! We will tell you about the brightest images and summarize the results of the ceremony.

An absolute triumphant and a real star of the evening. The singer broke the historic record for the ceremony, becoming the owner of the most awards among women. She has 28 figurines in her piggy bank. The previous record belongs to a country singer Alison Krauss (27 awards). To participate in the ceremony, Beyoncé chose a rather shocking leather dress from Schiaparelli Haute Couture and accent earrings from the same brand. Schiaparelli is famous for its spectacular surrealist jewelry (only recently we discussed the dove of peace brooch on Lady Gaga), so we suspect that these original jewelry will soon appear on the red carpet even more often.

A favorite of the ceremony, which has been inundated with nominations for several years in a row. This time Taylor Swift  managed to win an award in one of the most prestigious categories - for the best album, and on the red carpet - praise from stylists. The romantic look with braids and floral motifs was to the liking of all fashion critics. The star complemented the dress decorated with flowers by Oscar de la Renta with delicate jewelry of the Californian brand Cathy Waterman, preferring… opals to traditional diamonds! And we said that ornamental minerals are in vogue now!

Our favorite image of the ceremony! The star looked dazzling in a sparkly sheer Versace dress. The outfit was inspired in a very similar fashion by Mariah Carey 20 years ago. Sexy and stylish at the same time, and the singer's luxurious figure allows her to wear the most tight-fitting dresses. As for jewelry, there are no expected Bulgari and Chopard. The girl chose to confine herself to jewelry for her hand: a pair of bracelets that are symbolic for her, as well as several inlaid rings from the niche Los Angeles brand Spinelli Kilcollin.

We advise you to read:  MET GALA 2021 - the most dazzling jewelry outlets of the stars

The bright and daring rap singer became the main debutante of the ceremony, as it was she who was named "Best New Artist". Megan's fashion release was no less spectacular and bold than her songs: on the red carpet, she appeared in a neon orange Dolce & Gabbana dress and Chopard jewelry weighing more than 220 carats! Who has not exchanged the luxury of diamonds for the modest nobility of opals! But even the classic jewelry in the interpretation of the singer looked catchy, because the girl did not limit herself to a pair of products, but decided to put on all the best at once, as befits real rappers.

Another star of the ceremony is tireless Billie Eilish, which has recently been remembered not only in connection with her musical career, but also with the sensational documentary film “Billie Eilish: A Slightly Blurred World. " The singer, who won the Record of the Year for her song Everything I Wanted, made her red carpet appearance in her signature punk look: a colorful Gucci suit that covers the entire body and a traditional tonal panama hat. Completed the outfit with a brooch in vintage style. By the way, Billy is a great example of how to wear brooches is not boring and how to combine them with other bright details of the image.

One of the brightest newcomers of the evening is hip-hop singer Gabriella Wilson, better known under the pseudonym HER. She was the recipient of one of the most important awards of the ceremony: the Song of the Year award for the song I Can't Breathe, which refers to the Black Lives Matter movement. At the ceremony, the girl appeared in a rather strange outfit: a Dundas corduroy suit and a Sheryl Jones diamond necklace (by the way, another triumph of the niche jewelry brand). We believe that the choice of jewelry was not accidental, because the creator of the brand Sherrill Jones is one of the first women of color to open her own boutique in the famous “diamond district” of New York (this is where 80% of cut diamonds of the whole world are located!).

We advise you to read:  Top 7 cufflinks for a festive evening

Jewelery and bijouterie 0 176 views
"Last Call" is an important event for high school students. Despite the excitement associated with the upcoming exams,