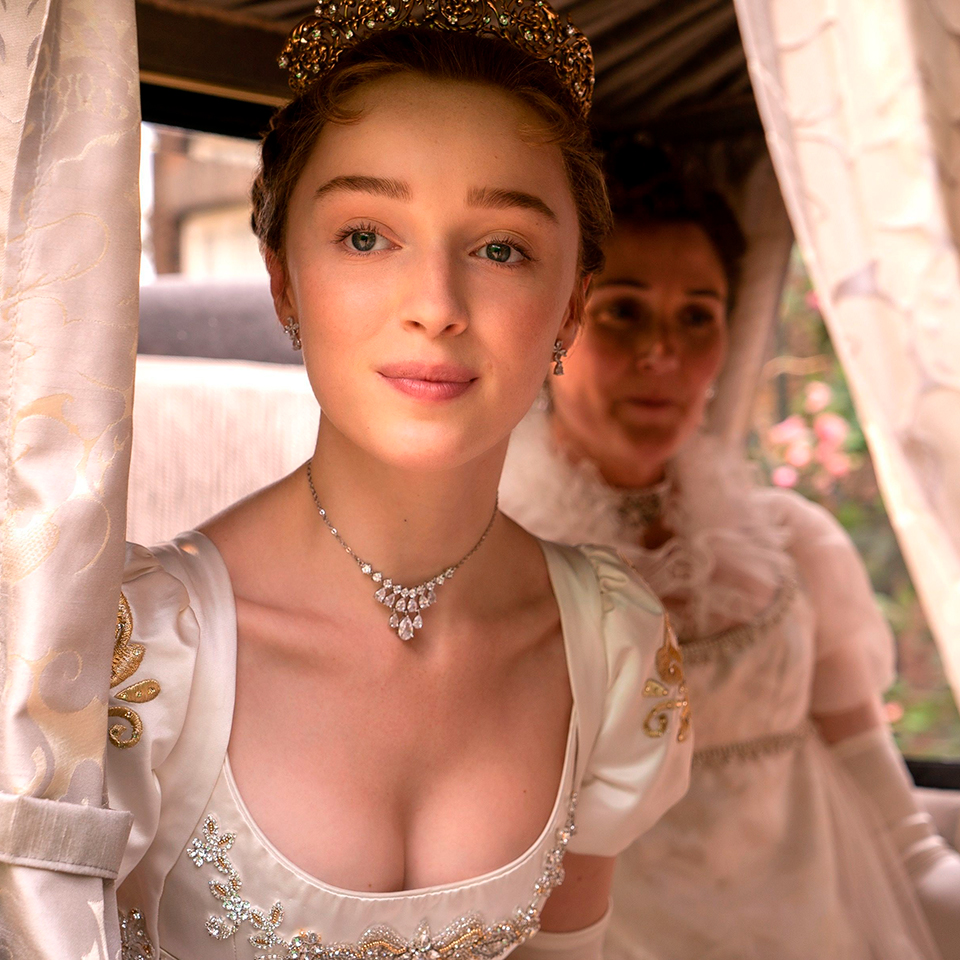 From costumed dramas, comedies, tragedies, online movie theaters are swelling. From the era of classicism to the era of the Reformation, from Victorian England, to the “golden age” of the Russian Empire, from the next film adaptation of Emma with a new star Anna Taylor-Joy to the Netflix super hit “Bridgerton”. The latter, by the way, will be discussed!

In its first month of online distribution, Netflix's Bridgerton was watched by 63 million people! He is discussed on social networks, admired and hated, and fashion magazines have taken apart every outfit in the show almost to fittings, from the main character to the crowd in the last row.

The fashion of the English Regency, presented in the series, is really worthy of attention. Elegant, feminine high-waisted dresses, rich fabrics with a lot of décor and mind-blowing jewelry: from royal tiaras to pearl sautoir, from ruby ​​parures to multicolored tutti frutti necklaces. How much of this wealth can be adapted to real life and how can you wear Regency-style jewelry?

A bit of history

The era of the Regency is a period in the history of England from 1811 to 1820. It got its name due to the fact that during these years the country was ruled by the prince-regent, who later became King George IV. The dates of the era coincide with the French Empire style, which historically always stood out brighter (after all, France from time immemorial was considered the ancestor of fashion), however, both styles were much alike: ancient Greek silhouettes (the waistline gradually drops to take its usual place), abundant decor, light colors , from fabrics - printed silk, velvet, muslin, satin.

Fashion began to develop faster: in 1814 the first sewing machine was presented, women's fashion magazines were especially widespread (fashion shows were held on dolls that were dressed up in new clothes of the season and sent to royalty and noble ladies). Of the accessories, intricate hats, gloves, reticules or balantines (small elegant fabric handbags) are required.

We advise you to read:  Electroplating: making jewelry at home

As for jewelry, here the imagination of the masters knew no bounds: cameos and feathers, precious and ornamental stones, motifs of flora and fauna, pearls, corals and mother-of-pearl - this is not a complete list of jewelry elements used in the era of the Regency and the Empire. This is the heyday of the richest French jewelry houses, such as Chaumet and Boucheron, and thanks to Napoleon Bonaparte, who ruled France at that time, jewelry acquired its own special, sacred language (the passionate emperor often encrypted love messages in jewelry).

Of course, not all of the jewelry in Bridgerton is historically accurate, but the beauty is pleasing to the eye. And between the gray gloom outside the window and luxurious, albeit slightly and implausible decorations, we definitely choose the latter.

As mentioned above, the motifs of flora and fauna are one of the most popular in the Empire style decor. The plant world is mainly represented by leaves, all kinds of flowers, vines, and the animal world is represented by insects, fish, birds. However, these jewelry does not look modest, shy or innocently delicate. On the contrary, due to the precious inlays and intricacy of their design, they attract everyone's attention.

In modern life, we wear such jewelry one by one. Their selfishness is manifested in the fact that they always want to be in the spotlight, and it is better to give them this opportunity. Multi-tiered butterfly earrings are perfect for a plain evening dress (you can even deliberately dull and conservative), and rose earrings will become an accent decoration in an ironic outfit with elements of casual and sport chic styles. A massive necklace in the form of a whole flock of winged insects can even be worn under a black turtleneck and a classic blouse in a neutral shade.

Rubies, amethysts, emeralds ... The obscenely large multi-colored inserts are one of the most obvious references to the Regency style. Jewelers tried to outdo each other, and the ladies boasted of their position, subscribing from France more and more expensive and catchy jewelry. In those days, parures were very popular - precious sets of up to 15 items, and semi parures - sets of 2-3 items.

We advise you to read:  White gold: what is it, what is the composition and fineness, what does it look like

That is, often the jewelry style was sustained in a single ensemble. Parures with rubies and emeralds were mainly the privilege of crowned heads. Ladies at court wore sets of semi-precious stones - chrysolites, amethysts, - and sometimes even from ornamental, for example, highly valued malachite.

Today, multi-colored stones are found both in costume jewelry and in high jewelery pieces. Everyday Empire-style jewelry may well be inlaid with semi-precious stones. Choose classic, but not fussy, pieces and pair them with deliberately modern pieces such as accent chains or asymmetrical earrings. The main thing is to catch the wave, and then the stylish image will take shape.

We have already written about these jewelry "with a secret" - medallions called Lover's Eye or Lovers' Eyes. The beloved, who were far from each other, ordered fragments of the face of their counterpart (more often eyes, but also lips, and even a nose) to the artists, which were then framed with metal or precious inserts and worn as jewelry: pendants, brooches, rings.

It is curious that in "Bridgerton" a necklace with such a pendant is worn by a girl who yearns for her lover who left for the war (no spoilers!), While, in fact, "Lovers' Eyes" became popular 20-30 years later. ... However, perhaps the costume designers draw a different analogy, because the very idea of ​​such a decoration was thrown to jewelers by none other than the British regent Prince of Wales (later King George IV), who ruled England during the times described in the series.

Earrings, necklaces, bracelets, reminiscent of a precious cobweb or openwork embroidery, are often found in the collections of the Empire era. They seem to be woven from metal; the intricate ornamentation contains inserts of precious and semiprecious stones, pearls or cameos. Today, this technique is also relevant, because it visually refers to the currently fashionable layering and oriental style. Due to the intricate “lace”, such jewelry looks accentuated and impressive, and that's all we need!

We advise you to read:  Protective mask created for $ 1,5 million

Oddly enough, openwork earrings and bracelets are almost universal; they can be integrated both into a stylish business look and into an elegant evening one. Wear them with silk blouses, chunky knit sweaters or classic tweed suits. And leave the intricate necklace for a dress with a luxurious neckline.

And a hundred and one more hair accessories! Not a single self-respecting lady left the house without a spectacular hairstyle. Feathers, bows, hoops, tiaras, wigs, hairpins with large decor - all this was in order in the arsenal of fashionistas of the early 19th century and is colorfully shown in the TV series "Bridgerton". Moreover, if it seems that such a fashion is slightly outdated, then you are deeply mistaken. Of course, not for every day, but as a bright element for a secular exit, it is very appropriate.

Catch a life hack: if it is not possible to buy a separate piece of jewelry for your hair, take a necklace, necklace or sautoir (ideally with pearls, it looks especially impressive) and use hairpins to fix them on your head. And an ordinary brooch can serve as a replacement for a hair clip.

Jewelery and bijouterie 0 176 views
"Last Call" is an important event for high school students. Despite the excitement associated with the upcoming exams,