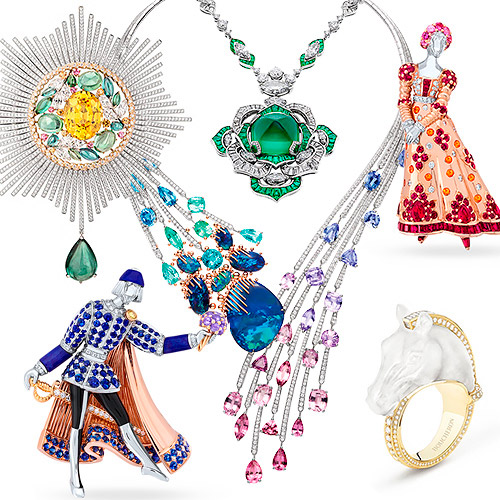 Along with “daytime” or “costume” jewelry that women buy for themselves and can wear to work, as well as cocktail rings that are appropriate for special occasions, jewelry also knows the concept of Haute Joaillerie - evening jewelry collections, often consisting of unique things created in a single copy, "built" around a one-of-a-kind stone.

These are collectibles purchased by very wealthy people and often become the subject of investment. Subsequently, they can be sold at auction, where, having acquired additional antique value, they often go for a price that is many times higher than the original one. High jewelry collections include not only single items, but also ensembles of rings, earrings, necklaces and bracelets. A complete set for a formal occasion is called a parure, and it also includes a hair ornament (tiara, comb, bandeau) and possibly a corsage brooch.

The traditional time and place for Haute Joaillerie premieres is the Haute Couture week in Paris.

The Haute Joaillerie collection of the French house Van Cleef & Arpels attracted the closest attention of jewelry critics. Traditionally, the house dedicates its high jewelery lines to fairy tales, both folk and literary. Charles Perrault and the Grimm brothers were already in the focus of his interest. But this year Van Cleef & Arpels chose a play instead of a fairy tale. However, much more popular than other fairy tales - Shakespeare's Romeo and Juliet. 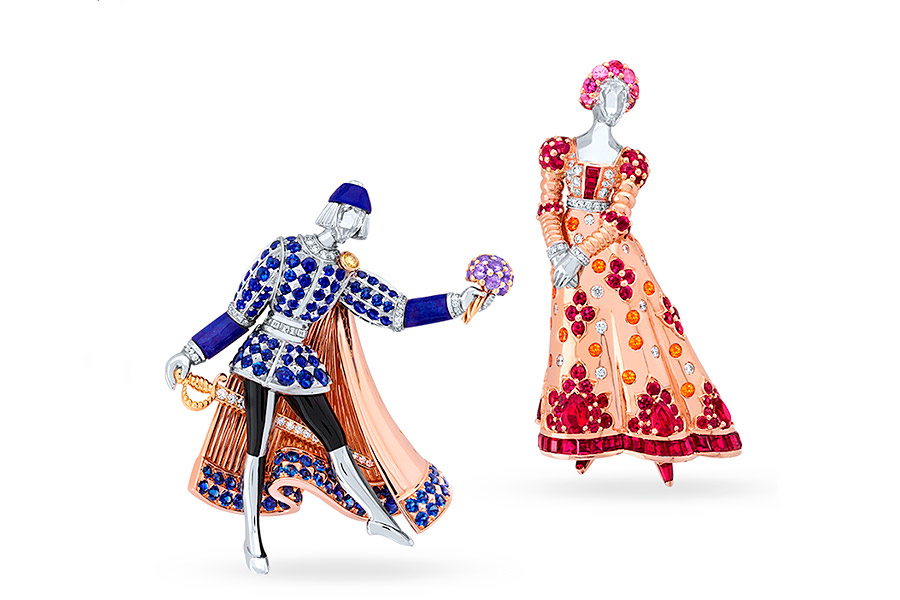 The choice of literary works as the basis of the collection for the home is not accidental: the central items of the high jewelry lines of this brand are brooches in the shape of girls and boys: fairies, princesses, princes, and so on. So in the new line there are brooches-figures of Romeo and Juliet, “dressed” in stylized Italian costumes of the XNUMXth century, with rose-cut diamond faces traditional for these brooches.

We advise you to read:  Nanositall jewelry

A real masterpiece - not only of jewelry skill, but also of wit - a brooch in the shape of a balcony with an lancet window, overgrown with emerald "ivy". There is no one on the "balcony", the window with diamond "glasses" is slammed shut. But if you turn the brooch over, you can see the golden figures of Romeo and Juliet holding hands: the secretly married heroes met to spend their wedding night. 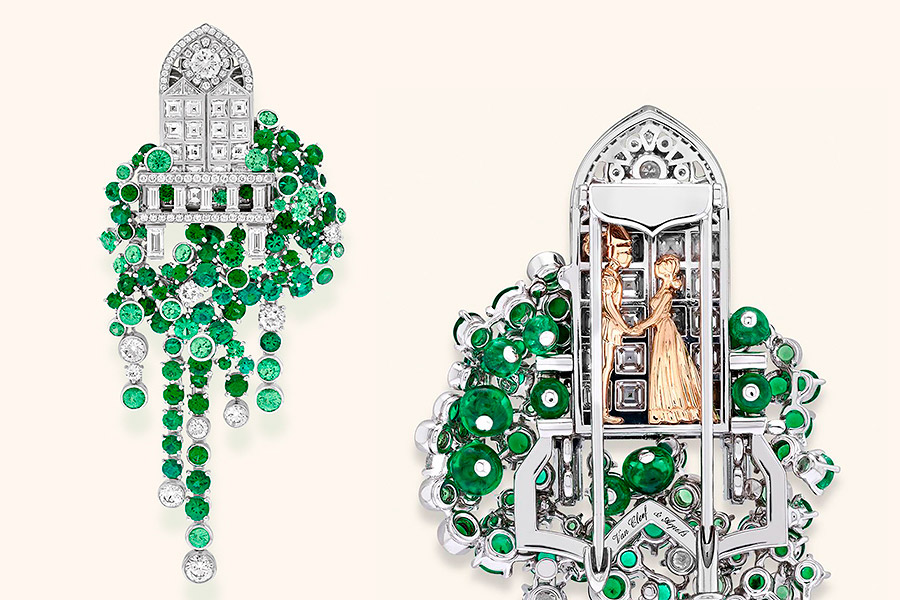 The old French house Chaumet, which supplied jewelry to Napoleon, showed a high collection of Les Ciels de Chaumet - translated "Heaven of Chaumet". As always, there are many diamonds – for example, for the Étoiles Étoiles (“Stars, Stars”) parure, only white gold and diamonds of the highest purity are used. As stated in the title, the tiara, earrings, and necklace look like a real starfall.

Since we are talking about heaven, it was not without the sun. In the Soleil Glorieux tiara (a bit old-fashionedly translated as "The Sun in Glory" - so they said about the gods), the luminary depicts an almost three-carat yellow diamond. The rays of the sun sparkle with colorless diamonds, and the clouds dispersed by it depict cabochons of rock crystal. 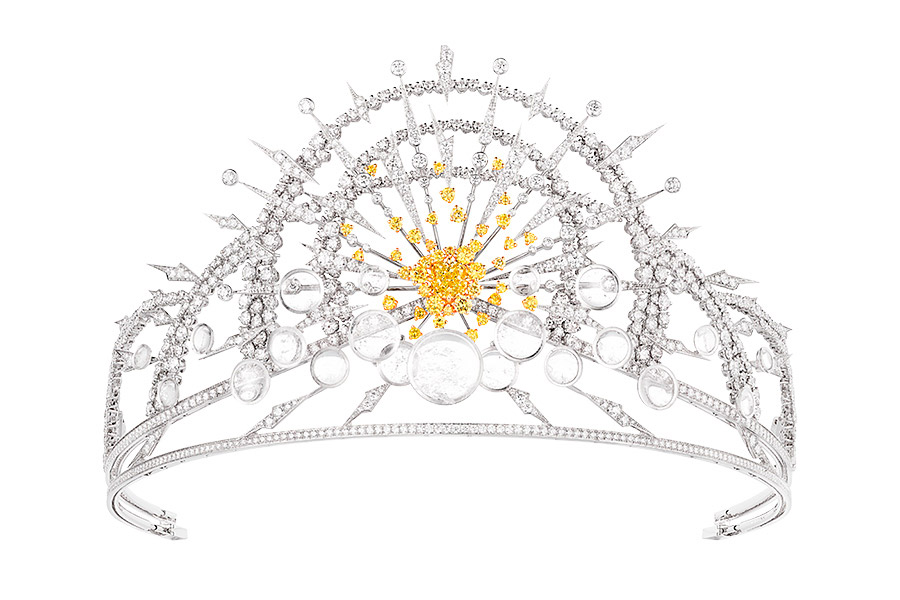 The central piece of the Passages tiara (meaning “Flight” in reference to heaven) is a magnificent asymmetrical necklace with extremely fashionable now black Australian opals and tourmalines - real neon blue Paraiba and the so-called Paraiba-type from Mozambique, subtly different in shade. 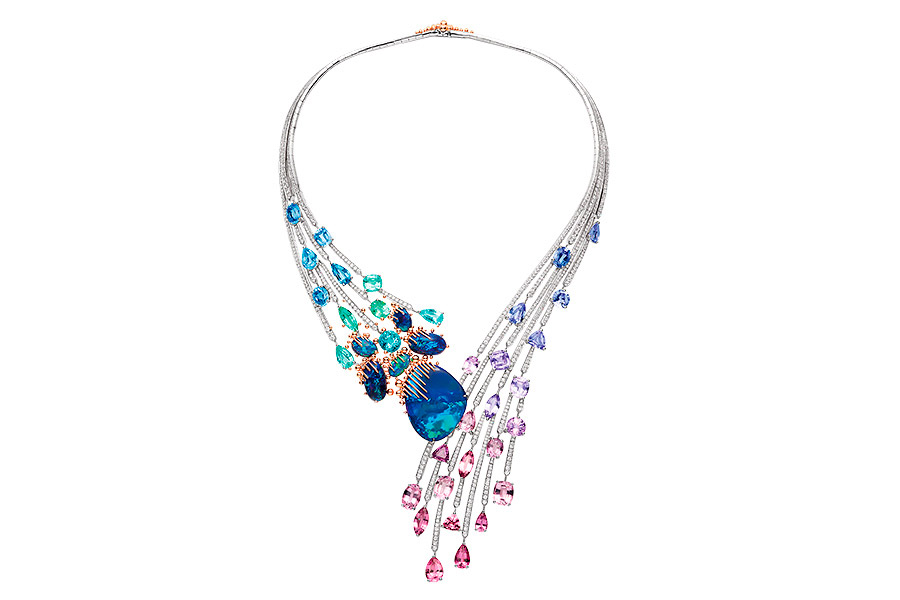 Boucheron, another long-time resident of Place Vendôme, the "jewellery heart of Paris", dedicated his new Haute Joaillerie collection to her - and to other famous corners of Paris. For example, the Cheval de l`Opéra ring and bracelet with horse heads carved from alabaster using the glyptic technique are reminiscent of the decor of the Opera Garnier building, and the octagonal central elements of the 26V necklace and ring, “composed” of 11 layers of rock crystal and onyx, in fact, about the Vendôme square (it is octagonal) and the building at number 26, which is occupied by Boucheron.

We advise you to read:  Choosing jewelry with sapphires 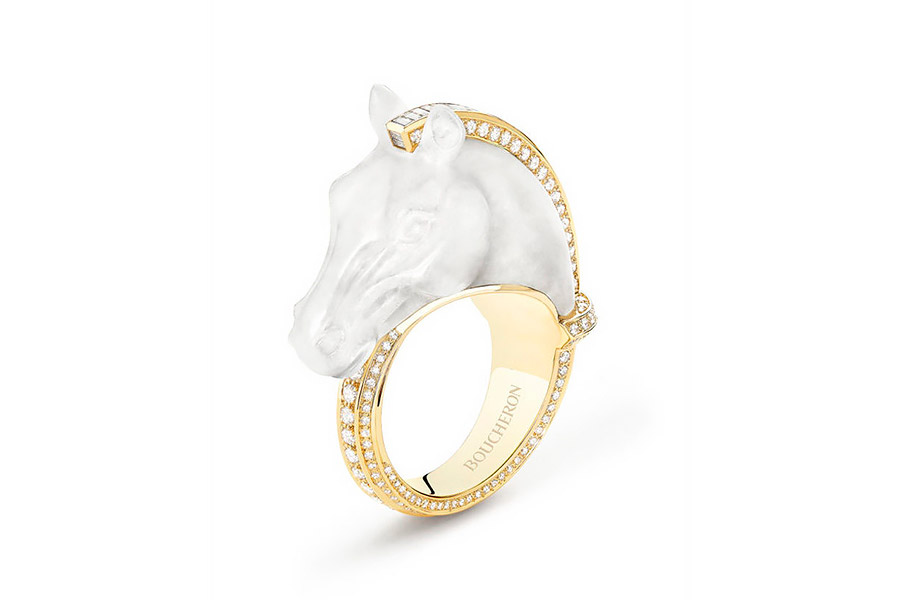 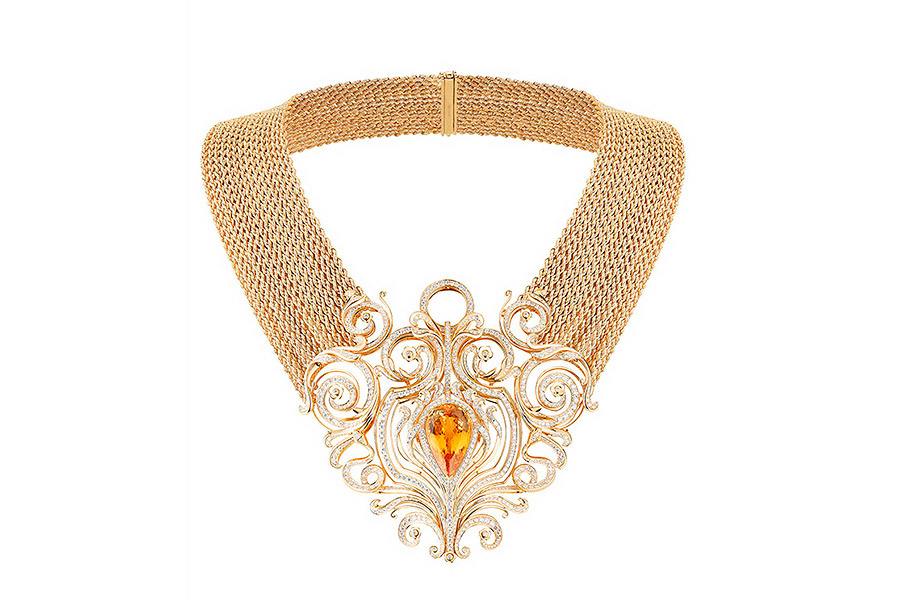 Along with Art Deco pieces like the Grosgrain line with malachite at Boucheron, there are the Belle Epoque classics that once made the house famous, and its signature open “question mark” necklaces (Frédéric Boucheron once invented this shape): one, Feuilles d `Acanthe, in the form of curls - acanthus leaves, another, Feuilles de Laurier, - a laconic laurel branch with pearl "berries". Some pieces, such as the rose gold Armoiries necklace, are transformers: you can unfasten the pendant from some, remove the brooch from others. The funniest little things that have replenished the legendary bestiary of Boucheron are Wladimir I and II rings paved with colorless and black diamonds, respectively, in memory of Vladimir the cat, which belonged to Frédéric Boucheron. 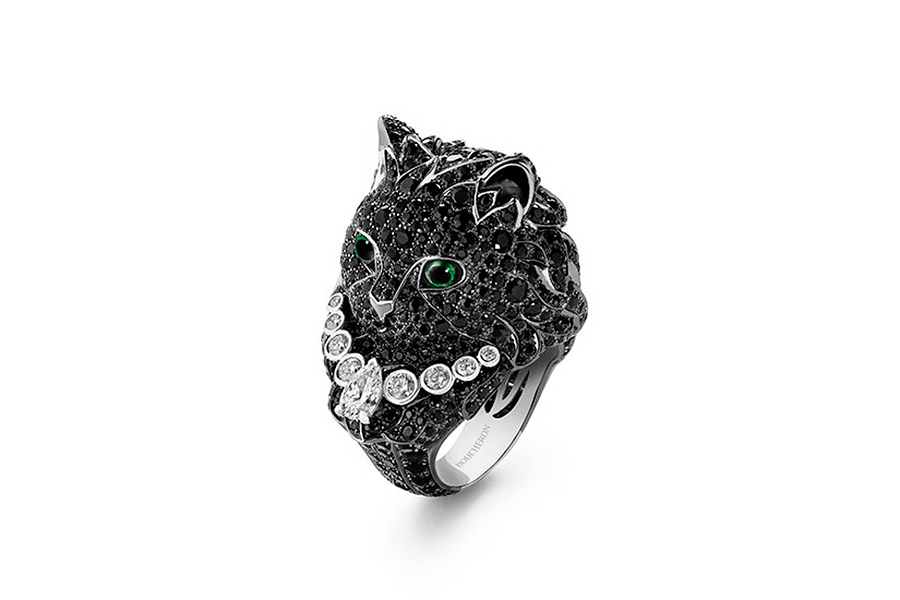 The “Russian spirit” can also be read in the new high collection of the house of Chanel, invented by the head of the jewelry division of the house, Patrice Legereau, - Le Paris Russe de Chanel. Russian (reminiscent of Chanel's romance with Grand Duke Dmitry Romanov) and Byzantine (through the fashion designer's favorite city - Venice) motifs appear in the brand's jewelry not for the first time. 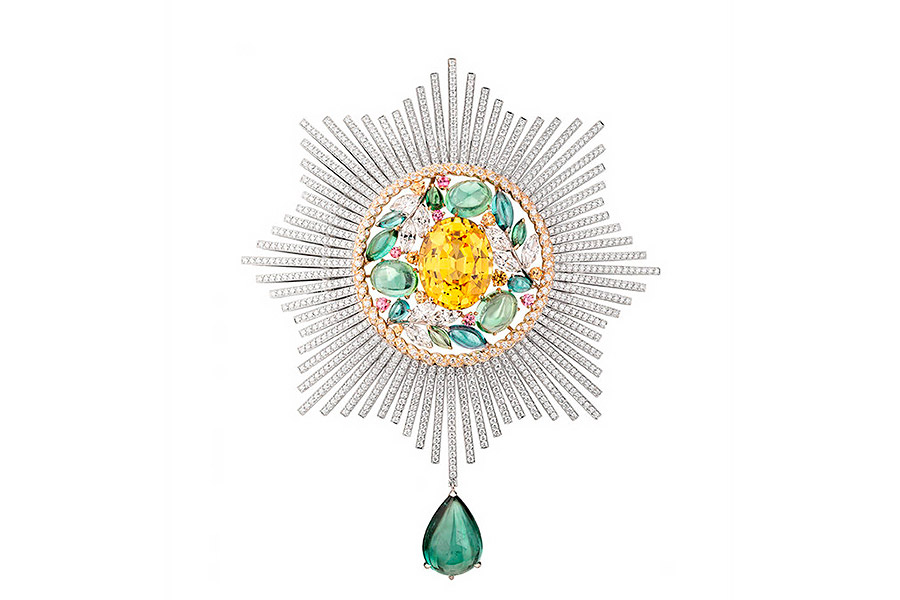 Now these are necklaces similar to kokoshniks with recognizable names (for example, Roubachka), patterned cuffs - “hoop” bracelets, like with the parsun of Russian tsars, narrow tiaras a la russe, diamond rings with a stylized double-headed eagle, brooches with colored stones, shaped like magnificent stars of orders of the Russian Empire. The late creative director of the house of Chanel, Karl Lagerfeld, loved to embody these motifs in costume jewelry - now they are also in a precious version. 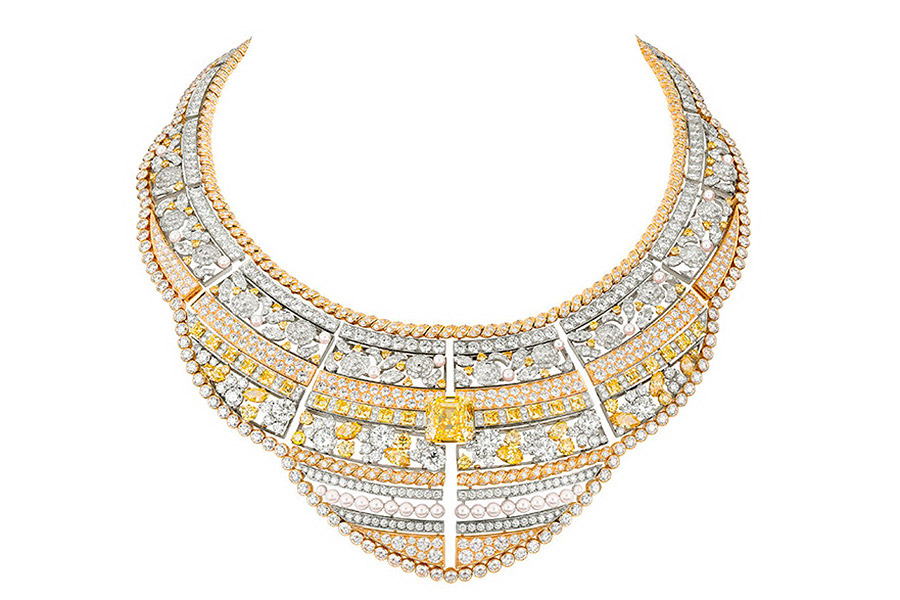 Among the Parisian presentations of Haute Joaillerie jewelry was the third “Russian” story - the Rubeus Imperial Alexandrite collection, which was shown at the Louvre Museum of Decorative Arts (which, by the way, has its own jewelry gallery, which is very worthy of attention). The central stone of the collection, as the name implies, was alexandrite - chrysoberyl discovered in the Urals in 1830 with a unique property - pleochroism (the ability to change color depending on the lighting). The stone was named after the heir to the throne, the future Alexander II.

We advise you to read:  Comfort comes first - the most comfortable jewelry for a stylish home look 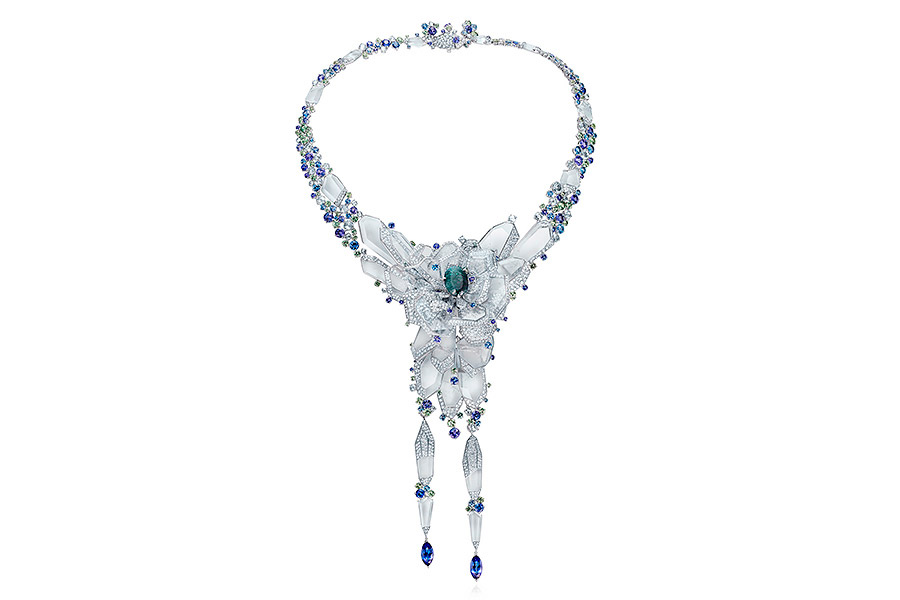 The most magnificent necklace of the line, created by the head of the artistic division of the brand Frederic Manet, adorns a stone of 69,37 carats, the world's largest jewelry alexandrite. In other items of the collection, designed in a lush classic - "imperial" - style, 46 more alexandrites of various sizes and cuts flaunt, complemented by diamonds, tanzanites, spinel, rock crystal. 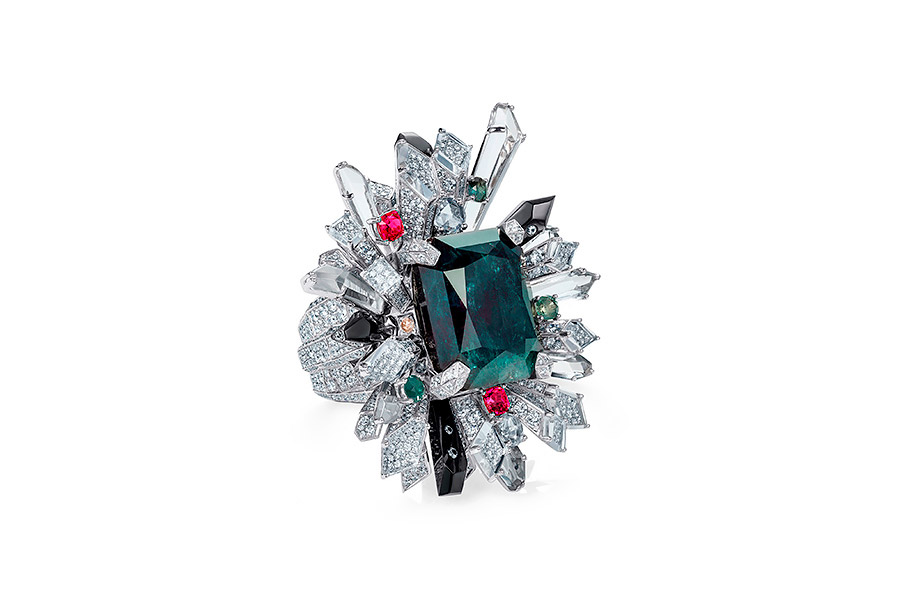 It is impossible not to mention the Italian house Bvlgari when talking about new high jewelry collections, although it traditionally shows its lines not in Paris, but at its own events. The favorite brand of the legendary actress Elizabeth Taylor and many other movie stars this year dedicated a collection of cinema and named it Cinemagia.

The central item of the collection is the Action choker! (Hollywood directors are shouting at the very moment when ours are shouting “Motor!”). The choker is like a ring of twisted film. 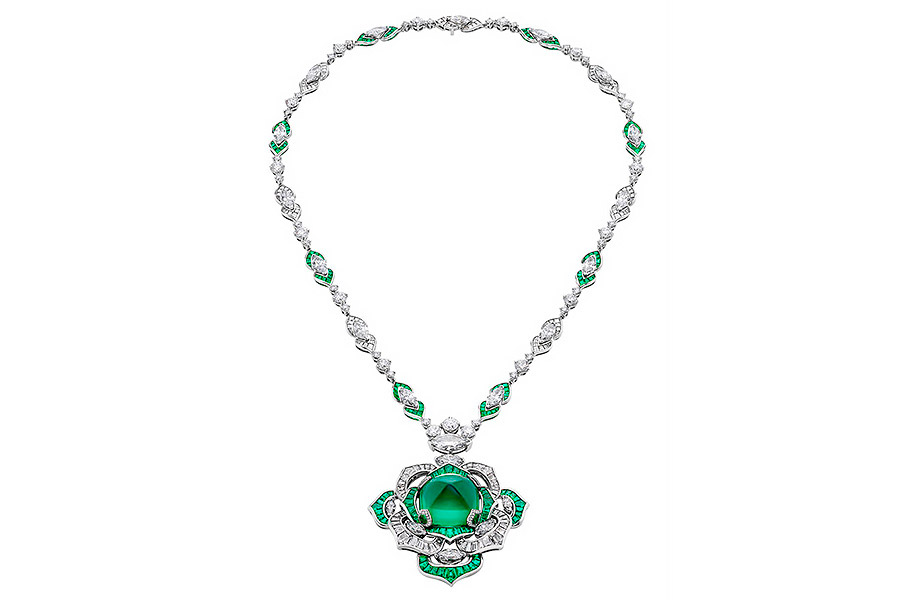 Associations with one of the most popular American films "The Wizard of Oz" are caused by a necklace with a "sugar loaf" emerald: you can see how young Judy Garland, in search of a miracle, walks along the yellow brick road to the Emerald City. 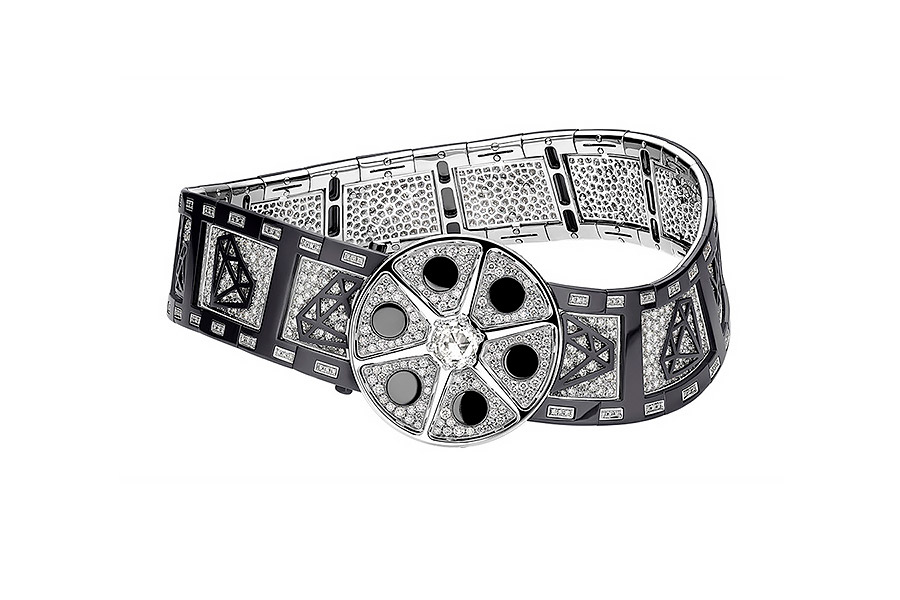 Jewelery and bijouterie 0 0 views
June 1 is celebrated as International Children's Day around the world. This important holiday reminds

Jewelery and bijouterie 0 66 views
Miriam Haskell occupies a special place among all famous designers of Costume Jewelry (bijouterie). She was born

Jewelery and bijouterie 0 79 views
Gold is always relevant, beautiful and desirable, but why limit your jewelry wardrobe to only precious

Jewelery and bijouterie 0 85 views
Jewelry and accessories with pearls are at the peak of popularity. The beauty industry is not far behind either.