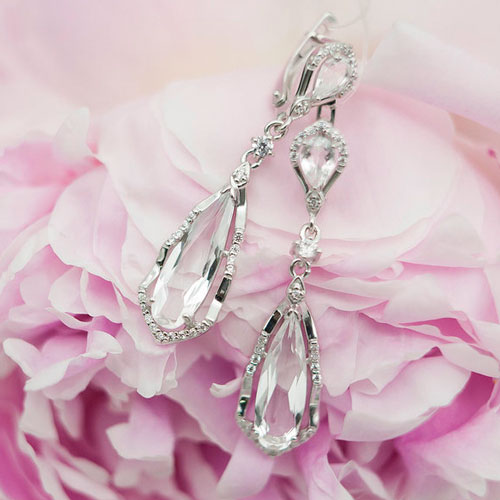 Weddings in royal families are a big event for the whole world. On such days, all attention is focused on the newlyweds, and especially the brides. Their images, outfits and jewelry are closely evaluated by both fashion critics and ordinary people. On the eve of the wedding season, we decided to recall the most spectacular jewelry of royal brides that have become legendary. 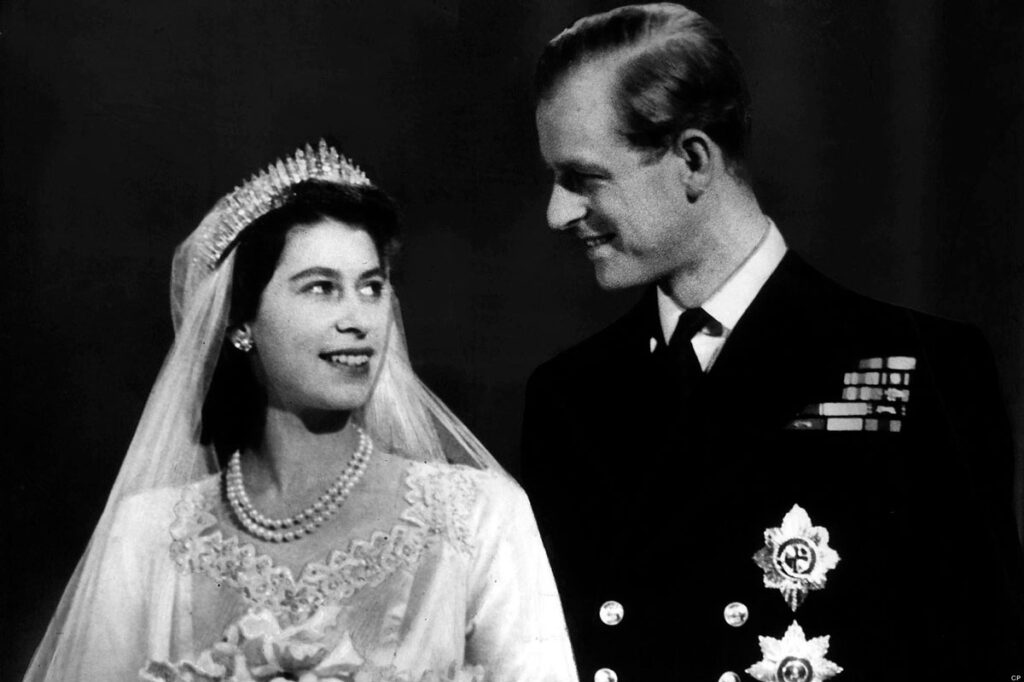 The wedding of Princess Elizabeth with Philip Mountbatten, who at that time held the title of Prince of Greece and Denmark, became a real event of the century! After the Second World War, the situation in the country was deplorable, so everything had to be very modest. However, people who survived so much trouble and suffering wanted a real holiday and were even ready to help their beloved princess in preparation for such a solemn event. Winston Churchill described the upcoming wedding as "a flash of color on a common gray path." 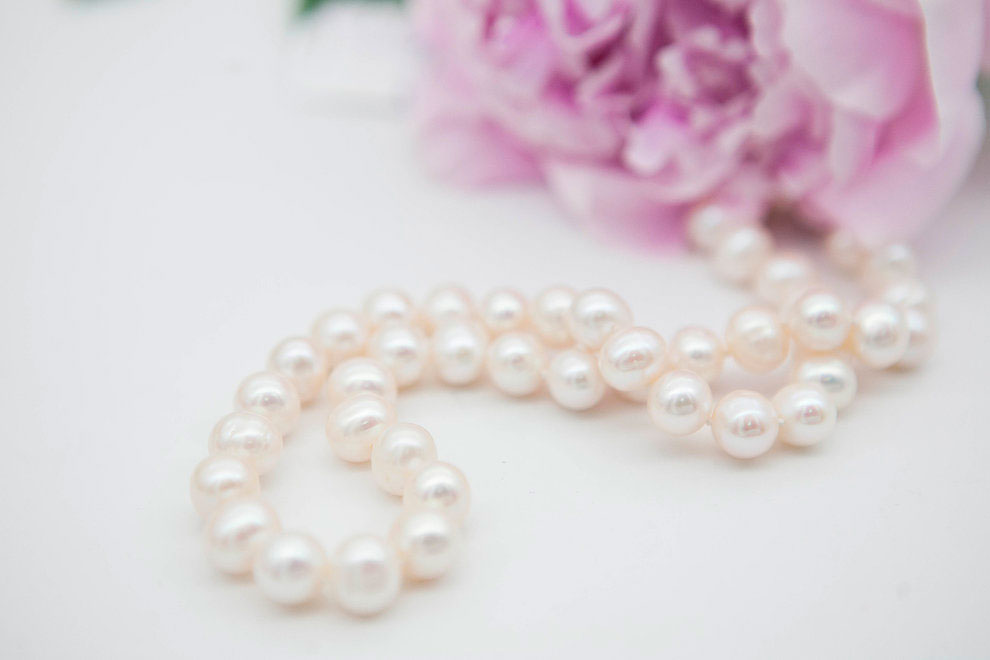 It's hard to believe, but at that time in the UK you could even buy fabric for a dress only with coupons that Parliament allocated to the future bride. Elizabeth's jewelry was inherited: on her wedding day, the bride wore a family heirloom - the diamond tiara of her grandmother, Queen Mary. On the neck of the future queen was a luxurious two-strand pearl necklace.

In fact, these were two separate pearl necklaces: the smaller strand, consisting of 46 pearls, belonged to Queen Anne Stuart, the longer strand included 50 pearls, attributed to Caroline of Brandenburg-Ansbach, wife of George 2. These necklaces are considered among the oldest royal jewelry still worn by the queen. 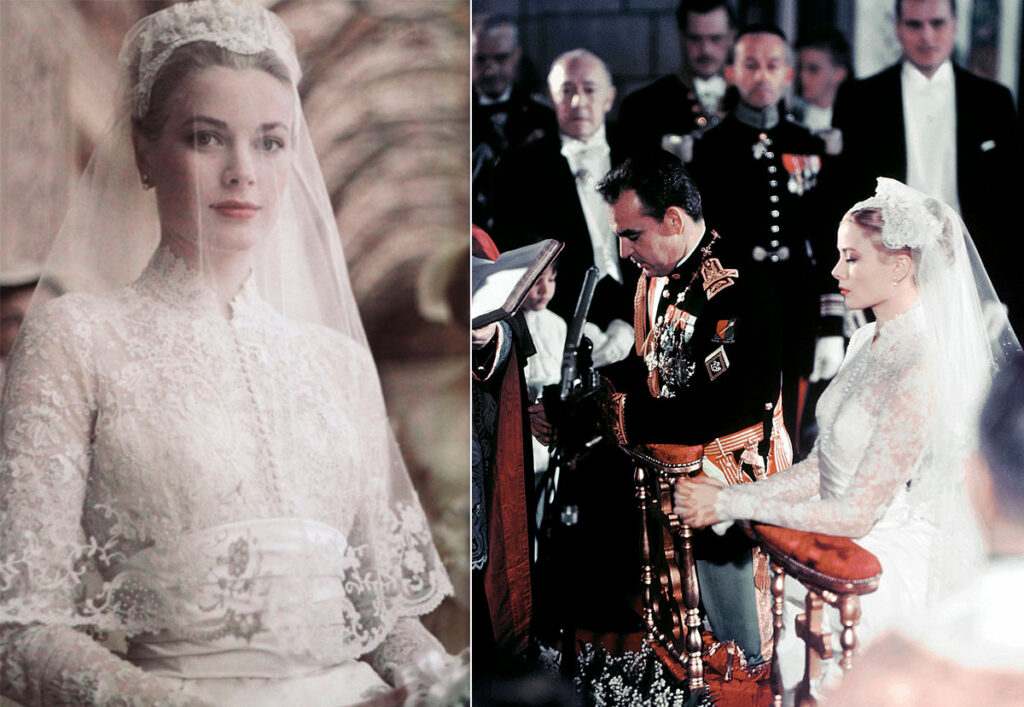 In 1956, Hollywood actress and Academy Award winner Grace Kelly married the reigning prince of Monaco, Rainier 3. The luxurious wedding ceremony, called the "wedding of the decade" by reporters, was the culmination of one of the most high-profile romances in the history of royal Europe.

We advise you to read:  What kind of jewelry to wear this fall? 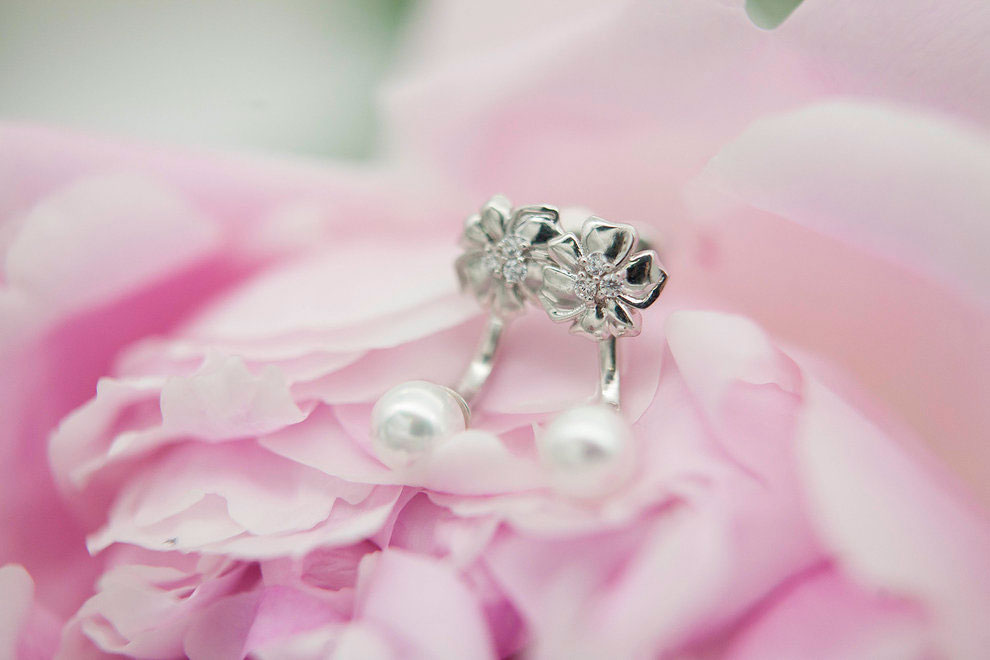 The dress for the ceremony was designed by Helen Rose, a costume designer for the film studio "Metro—goldwyn—Mayerstarring Grace Kelly. One of the main wishes for the dress was that it should not overshadow the beauty of the bride. The dress and veil were embroidered with pearls, which the bride loved very much, so she chose the appropriate jewelry. She always felt the measure in the use of jewelry very subtly, so even for the wedding she preferred modest earrings. They consisted of two pearls, one of which was located in the earlobe, and the second - under it. It is worth noting that this design is very popular with modern fashionistas and brides. 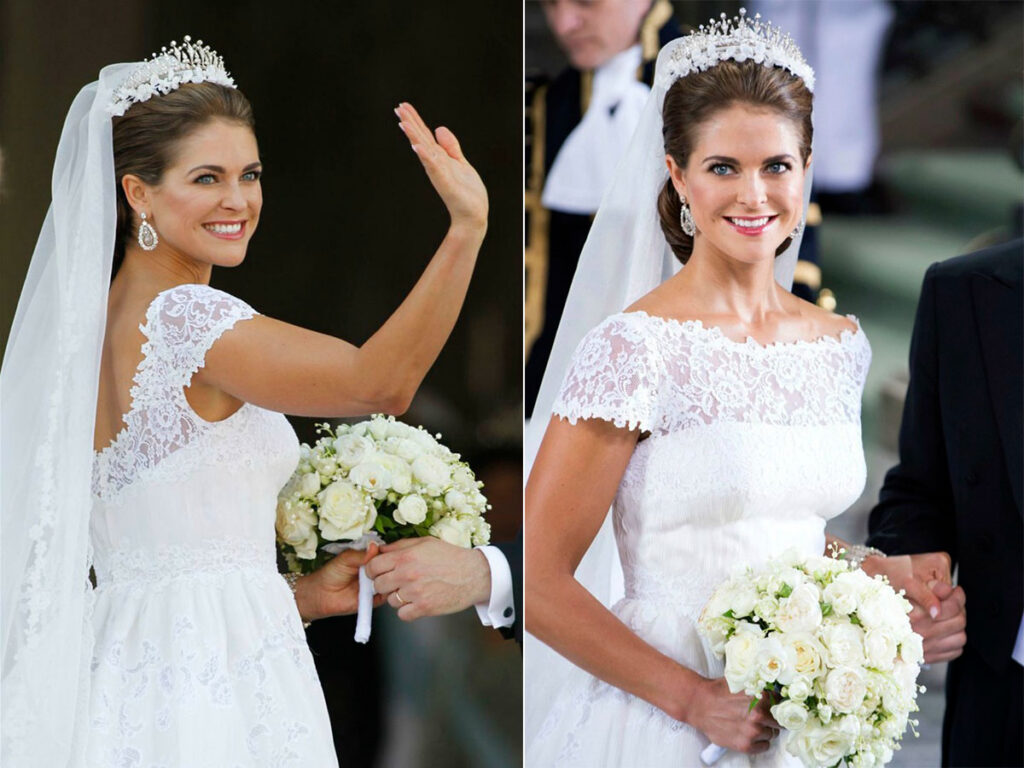 In 2008, Princess Madeleine of Sweden married New York banker Chris O'Neill at the Royal Palace Temple in Stockholm. The royal wedding was glamorous and at the same time discreet, as is customary in the Scandinavian countries. By tradition, the head of the Princess was crowned with a luxurious tiara studded with diamonds, and a light veil with lace was attached to the back of it. 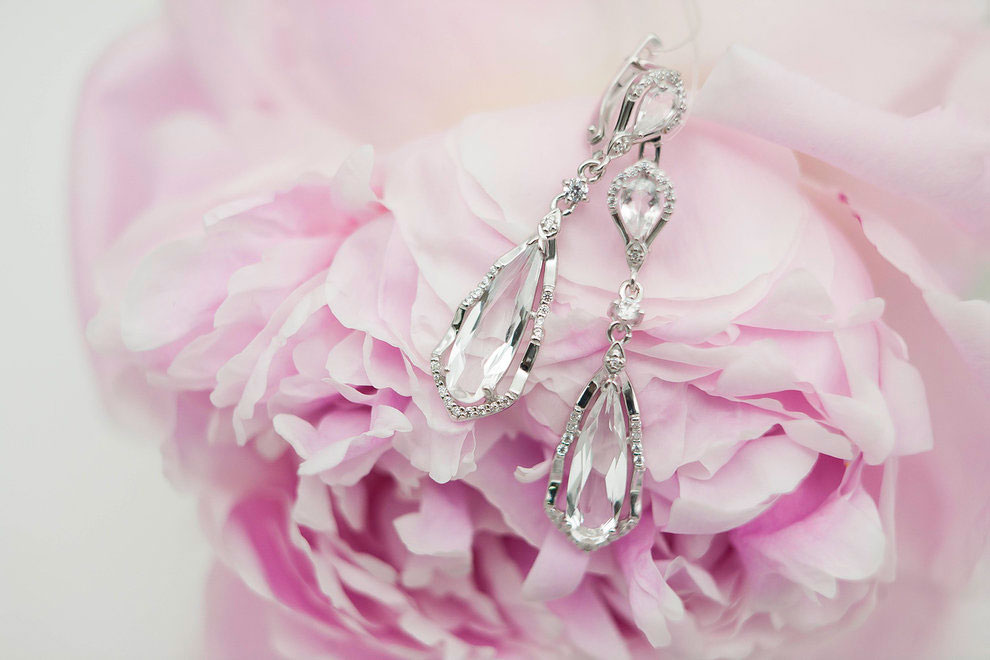 The bride completed her luxurious look with sparkling drop-shaped diamond earrings from the collection of Bernadotte, the ruling dynasty of the Kingdom of Sweden. These large pieces of jewelery looked perfect with a lace boat neck dress, and also emphasized the bride's beauty and blue eyes glowing with happiness! 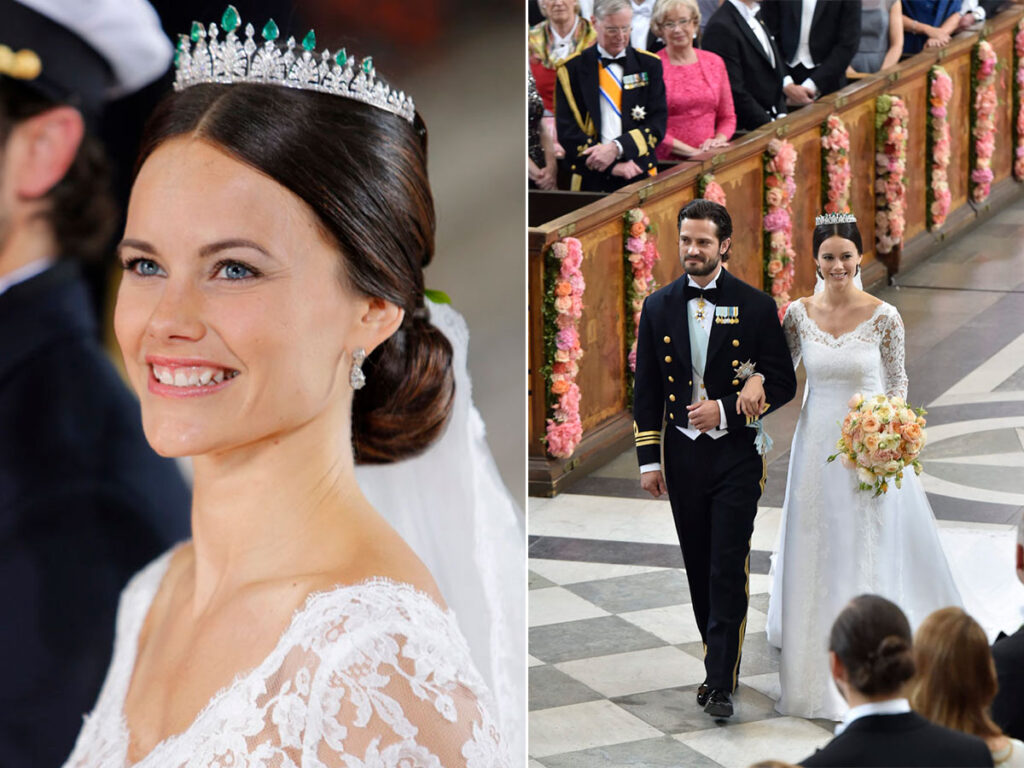 In 2015, another royal wedding took place at the Royal Palace of Stockholm. Prince Carl Philip married yoga instructor, famous model and reality TV star Sofia Hellqvist, who later became the Duchess of Värmland. The royal family did not immediately like the chosen one of the prince, but after 4 years of relationship, the couple announced their engagement.

We advise you to read:  Is it possible to give a bracelet according to signs 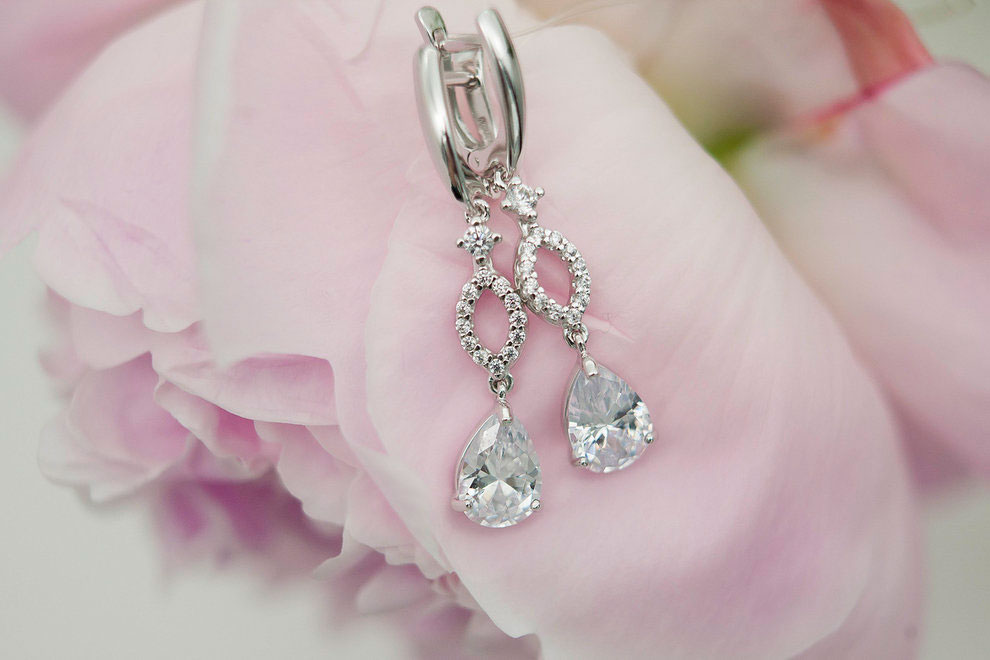 The wedding with the crown prince made Sofia Hellqvist the first Swedish duchess of humble origin in many years. For the celebration, the bride chose a simple dress and, as royal brides are supposed to, put on a luxurious tiara with diamonds and emeralds. To pair with her, Sofia chose small drop earrings, which were the perfect completion of her laconic look. 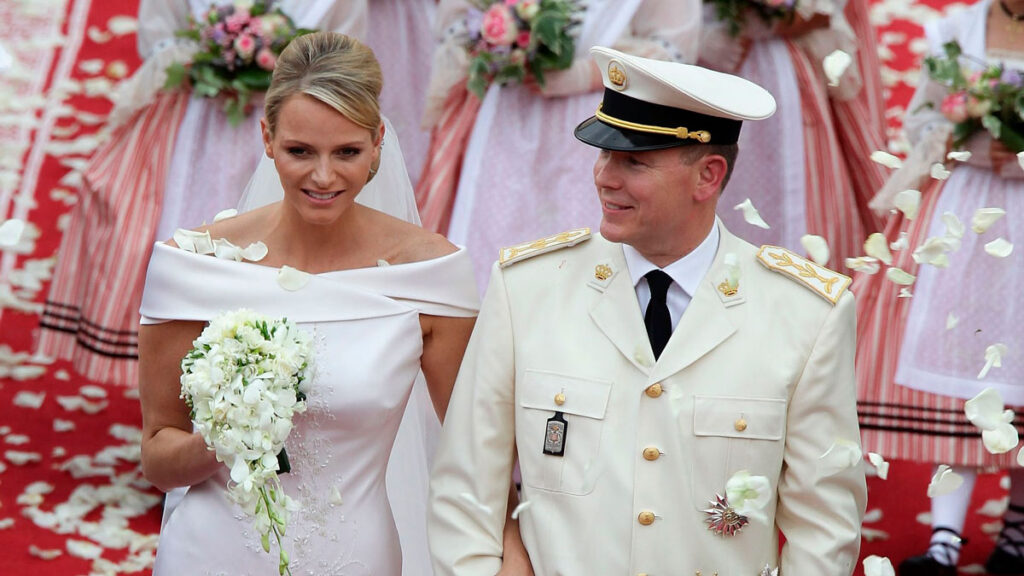 In recent years, many princes have been marrying non-royal families. So the Prince of Monaco Albert 2 chose professional swimmer Charlene Wittstock as his wife. The girl, who competed at the Olympic Games and other competitions for South Africa, met the prince in 2000 during a swimming competition in Monaco. 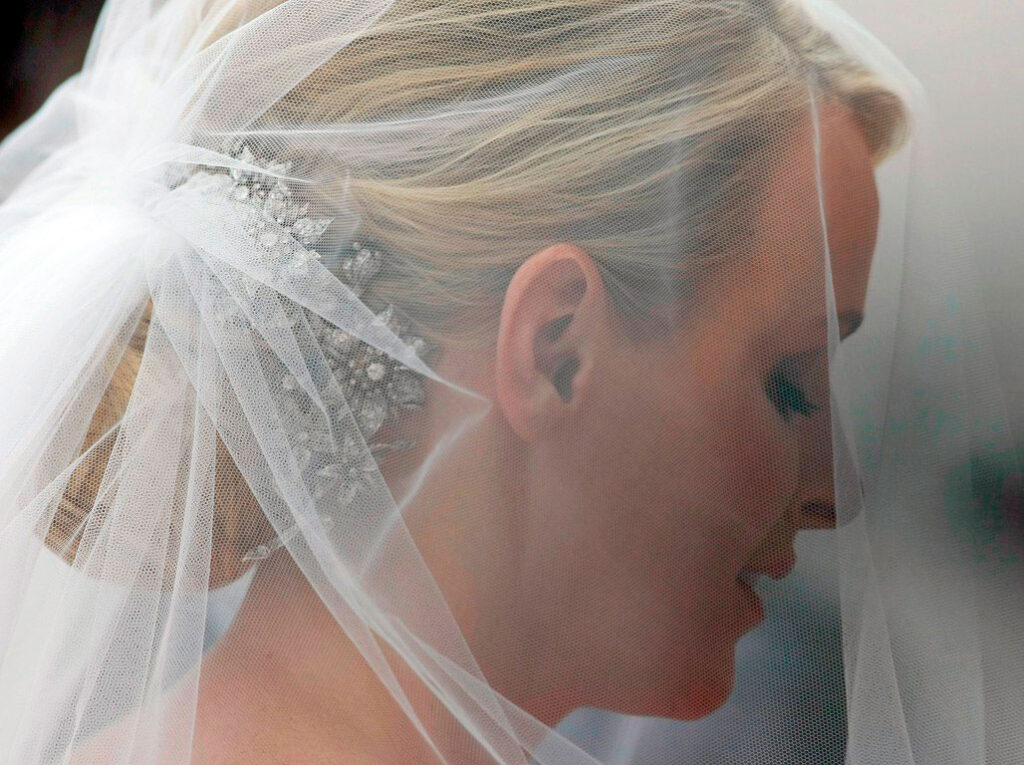 On the day of the wedding, Charlene looked stunning in a simple Armani Prive wedding dress, which was complemented with a minimum of jewelry, which many observers bewildered. Charlene broke with a long tradition of monarchs and decided not to wear the diamond tiara. Instead, the bride chose an elegant hair ornament created by jeweler Lorenzo Baumer. Several intertwined flowers, encrusted with eleven pear-shaped diamonds, stylishly decorated the hairstyle of the future princess. 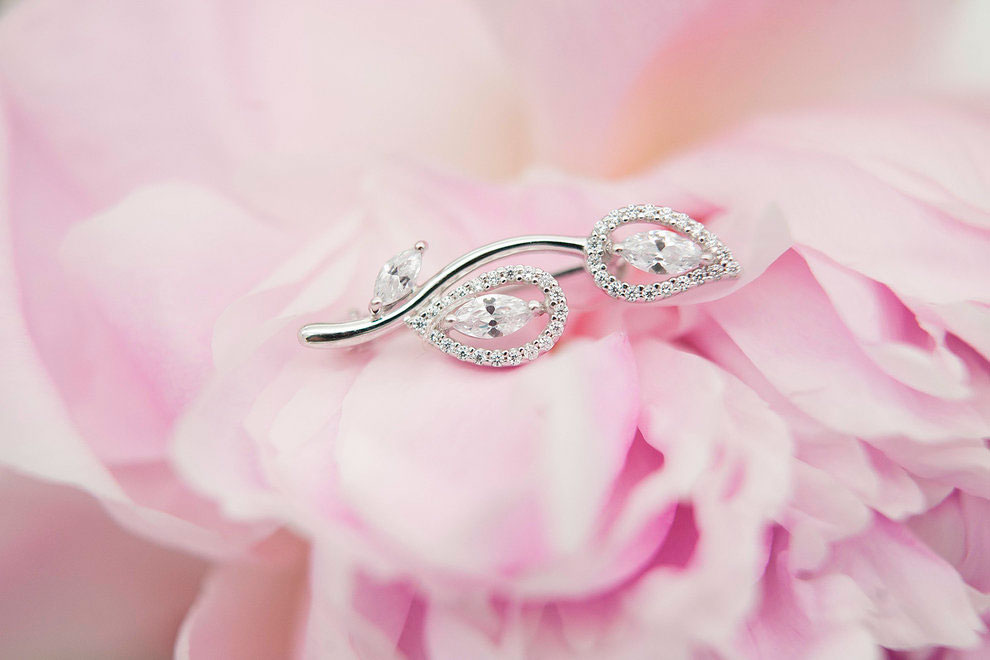 We suggest paying attention to brooches that are fashionable this season - a thin elegant branch will decorate a wedding dress and become a delicate accent accessory. A big plus of this jewelry is that it can be worn in everyday life and after a solemn event as a symbol of love between two hearts.