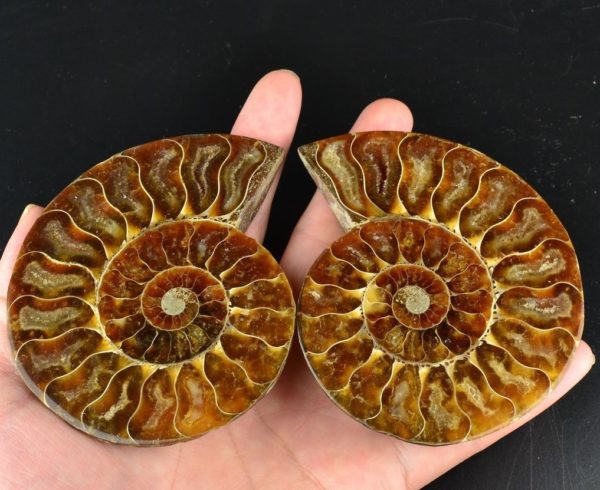 Peering into the bewitching mother-of-pearl of the shell, one gets the impression that before one's eyes is not just an amphibian fossil, but a spiral box with a secret, hiding answers to the most secret questions in the depths. 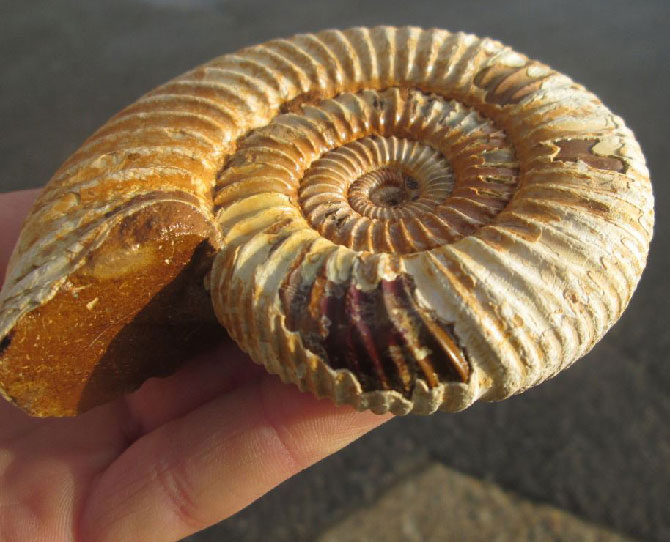 It is not in vain that collectors, connoisseurs of jewelry values, experience awe at the sight of ammonites and strive to possess treasures.

Ancient nautiluses are of great value to science. The stone, with the imprint of marine animals, tells a lot. With the help of fossils, scientists determine the geological age of the rock, track the biological evolution of all life on the planet.

Findings of cephalopod fossils are historically important, which indicate that marine predators lived on the planet in the Paleozoic era, from the fourth to the last, Cretaceous geological period. During one of the five great mass extinctions, cephalopods ceased to exist.

It is known that the ammonites got their name in the XNUMXst century AD thanks to the ancient Roman writer Pliny the Elder. Spiral-shaped shells of ancient organisms resemble the rolled horns of a ram, which were possessed by the ancient Egyptian god named Amon, the lord and ruler of the black, heavenly space.

In the middle of the 3th century, the French biologist, naturalist Comte de Buffon gave a detailed description of the fossils of marine organisms. At that time, one genus of ammonites was known, but today there are more than XNUMX thousand species of them. In those days, Europeans called fossilized shells "twisted stones."

Despite the fact that ammonites were marine animals, due to geological changes in the earth's thickness of the planet, the remains of mollusks are found on land, on almost every continent. Unique finds of fossil mollusks have been examined from dozens and even hundreds of deposits around the globe. 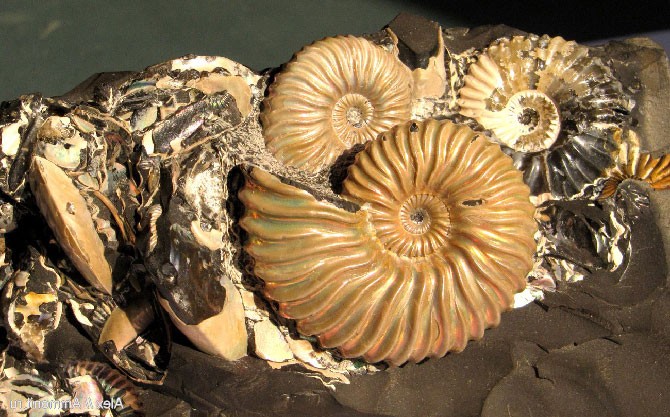 In Morocco, the Republic of Madagascar, precious shells are found. A jewelry ammonite was discovered in a Canadian deposit. In various regions of Russia, prospecting for fossils is underway. There are huge samples, spirals reach two or more meters.

A fragile fossil does not look like a dense and hard mineral in structure, because it is of organic origin.

The shell is a compound of calcium carbonate and other chemical elements, has the form of a spiral structure containing many chambers. Opaque, with a layered surface, the fossil tends to shimmer iridescently.

We advise you to read:  Apophyllite - description, magical properties of the stone, who suits the Zodiac, the price of jewelry

A shell buried under a pile of sand or clay was filled with various minerals. Most often it was chalcedony and calcite. Reflecting the light with cold edges, they add mystery and fabulousness to the ammonite.

No less interesting are the shells, including symbircite or pyrite. Stones that have no less magical properties than the ammonite itself. But the title of the most valuable and beautiful of the genus of ammonites rightfully deserves an ammolite. A stone that combines all possible colors seems to be a frozen piece of the rainbow.

If you put a large shell, such as a rapan, to your ear, you can hear the sound of the surf in it. Many people know the sensations received from listening, they recall rolling peace and tranquility.

Since ancient times, ancient healers have identified the valuable healing properties of ammonites. Prehistoric luminaries of medicine used shellfish fossils as a sedative.

Each healing stone, fossils are no exception, has a positive effect on human health. Precious shells help to heal: 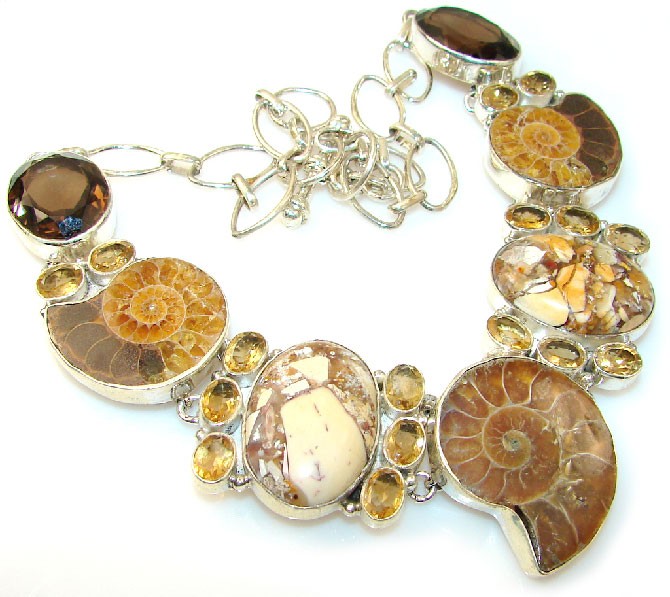 Ancient Arab healers practiced the treatment of infertility with the help of crushed shells of mollusks. It is known that any disturbances in the human energy field provoke the appearance of diseases. In the old days, Chinese healers claimed that ammonite affects the proper circulation of energy, which leads to the restoration and strengthening of the physical body.

From ancient times, from the moment of origin, man sought protection from Nature with the help of amulets. The modern rhythm of life has dragged people into a whirlpool of worries, worries and "chaotic" movement, the human essence is weakening away from real natural resources that replenish the energy flow. That is why the use of a gem as a talisman is very popular among our contemporaries.

Natural stone is an accumulator that emits vibrations, strengthening the biofield. The ammonite magic stone contains the strength and energy of ancient deep-sea creatures. 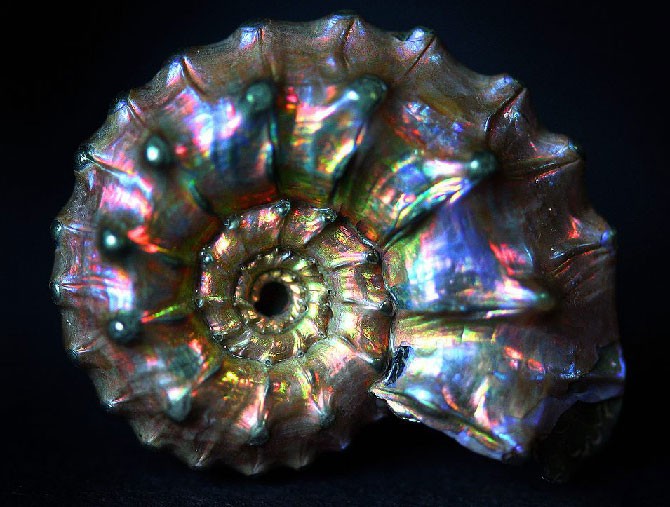 Narratives of different nationalities speak of those features of shell amulets that are most acceptable to them. From all the beliefs, a general picture is formed about the magical power of the ammonite, and for what purpose jewelry with a stone is put on:

The energy compatibility of a mineral with its owner helps to more clearly understand situations, anticipate and avoid danger. An amulet with a stone contributes to the development of intuition.

Each nation had its own definition of the type of treasure. One looks like a stone like a snail, the other like a petrified snake. Some sources tell of the use of ammonite to communicate with otherworldly forces.

Important! It is not recommended to use gems for ritual actions that are negative in nature. It must be remembered that the mineral is a gift of nature, which gives the ability to strengthen, and not destroy the essence of man.

High-class jewelers make truly works of art from fossils. Jewelry is unique in its own way, this is facilitated by magnificent colors and bizarre shapes of shells.

For jewelry, small-sized mollusks are used. The more colorful and pearly the surface of the ammonite, the higher its value. Approximate prices for fossils are provided: 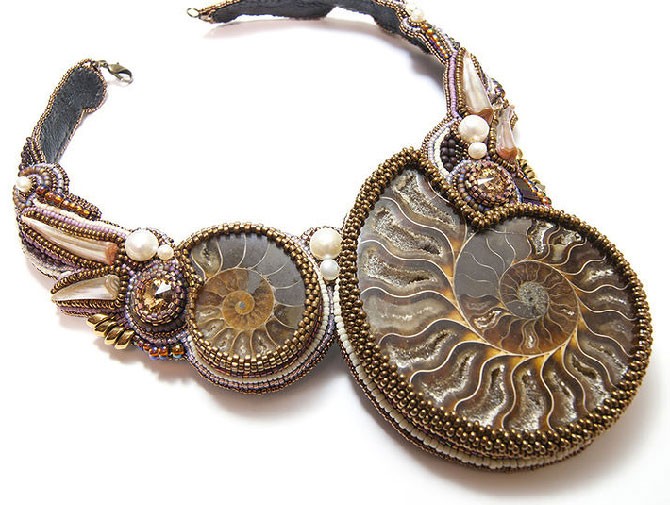 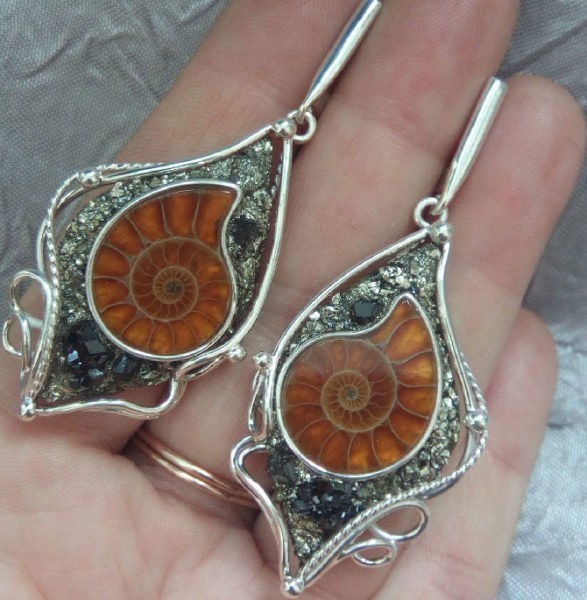 The shell of a clam can be suitable for pendants, necklaces and other precious items. What color of metal the fossil is combined with depends on the shade. To get an original decoration, you can buy a fragment of a shell and order an exclusive work.

A whimsical curl of the shell, decorated with grooves, its smooth surface, with a mother-of-pearl tint, attracts the eye and makes you admire it. The colors of ammonites depend on the chemical elements that interacted with the shell surface.

It is known that removing the upper scales of the shell reveals bright, saturated, iridescent colors of the precious fossil. For example, Ammolite is a variety of ammonite, has an extensive palette of colors, there are fragments that shimmer with all the colors of the rainbow.

We advise you to read:  Agate stone: properties, who is suitable for the sign of the zodiac, as well as the rules of use

Ammonite is unique, it is difficult to confuse it with any other material. It will not be difficult to distinguish a natural sample from a fake if it is presented in full size. The situation is much more complicated with jewelry, in which there are precious varieties of shells in small fragments. 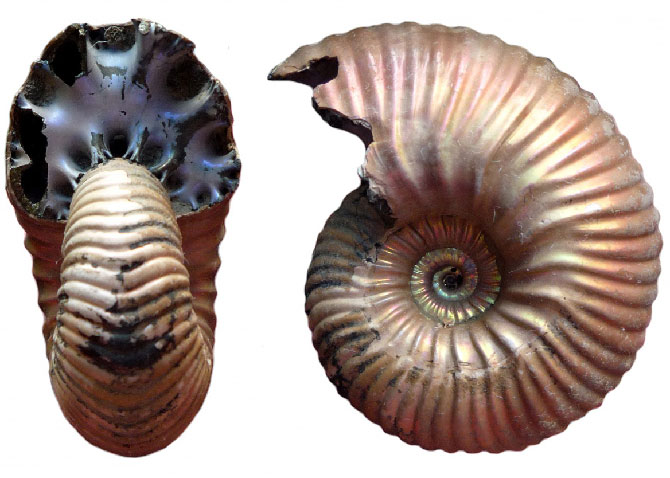 One of the characteristic features of this ammonite is a non-repeating pattern. Fragments of the fossil in earrings, absolutely identical in color and image, are probably an imitation.

Ammonite jewelry is quite fragile, so it should be stored in a separate case with a soft velvet surface inside. Fossils, like pearls, amber cannot stand the effects of chemical reagents. Therefore, it is better to clean jewelry in a soapy solution, which is thoroughly washed off with water.

Important! In order to preserve the beauty of the ancient treasure for as long as possible, it is necessary to protect it from high temperatures and direct sunlight.

If you know about the impact of the amulet on the energy, psyche and physical condition of a person, you can understand who this or that gem can suit more, and who is less favorable to its nature.

The astrological properties of ammonite have a beneficial effect on each sign of the zodiac. However, clear patronage is given to representatives of the water element. 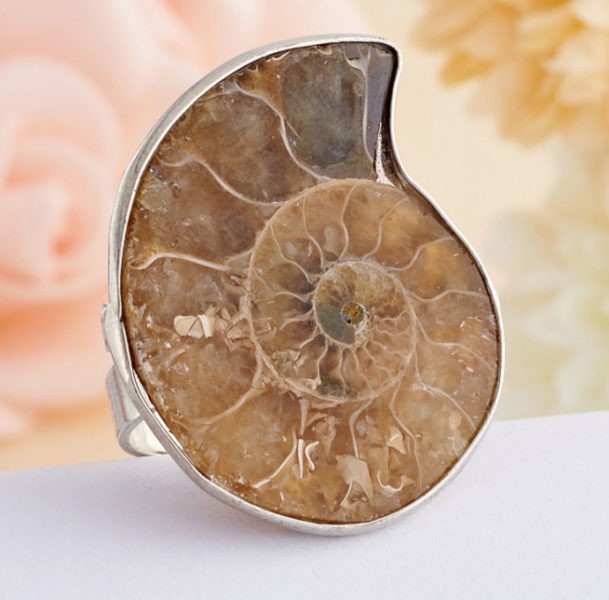 Important! If you use a fossil as a talisman, you should know that the ammonite is “selfish” and does not accept neighborhood with other jewelry.

It is no secret for many that precious minerals give beauty and wisdom, happiness and wealth to humanity. Ammonites are filled with the richness of nature, therefore they require careful attitude to themselves, to the people around them, and most importantly to the environment.

Ornamental 0 62 views
This is a semi-precious stone, or rather, ornamental. However, the stone is rare. Basically, mookait -

Ornamental 0 72 views
Alunite or alum stone - is formed in the upper layers of the earth's crust, as a result of low-temperature

Ornamental 0 67 views
To reveal the secret of eternal love, many who want to find boundless happiness strive. For this purpose, use

Ornamental 0 104 views
Sugilite is a purple mineral that belongs to silicates. It is a young gem with many names and

Ornamental 0 153 views
Marcasite is a radiant pyrite, iron polysulfide. In the jewelry world of past centuries under a beautiful name,