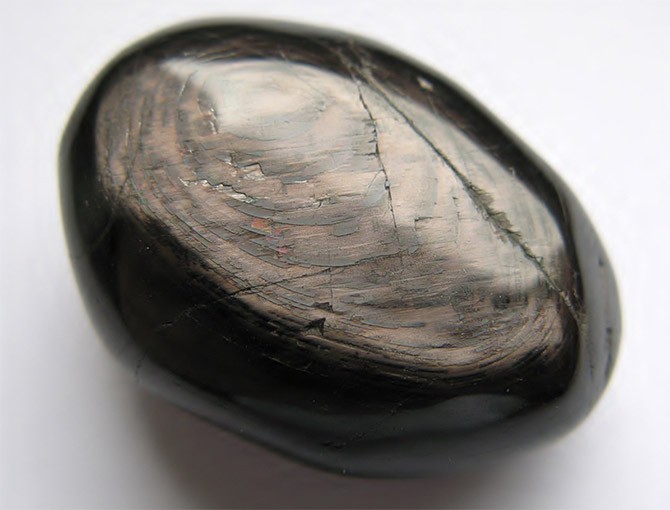 Hypersthene, known in recent years as enstatite, is a rock-forming silicate mineral from the pyroxene group. The most valuable properties of this stone are magical powers - the ability to replenish vital energy, rebuild the very essence of a person, making a "reboot" of consciousness and thinking. In addition, hypersthene is a mineral that rarely occurs in single crystals, so the price of such specimens is high.

Hypersthene, as a mineral, was officially recorded on the threshold of the 19th century, namely in 1803. The name of the nugget was given by Valentin Gayuy, a teacher and innovator from France. From the ancient Greek "hypersthene" is translated as "super strong".

Later, exploring the find, mineralogists decided to rename the nugget, calling the stone enstatite, which translates as “opposing”. The new name has come into use since 1855 thanks to the German mineralogist Gustav Kenngott.

Subsequently, it seemed to the representatives of science that it was not enough to change the name of the stone. Therefore, in 1988, the council of scientists decides to exclude hypersthene from the list of independent minerals. Then enstatite became a kind of ferrosilite mineral, since the chemical composition of most stone samples included iron impurities.

Modern science applies the name "enstatite" to specimens of a nugget with an iron content of less than 5%. When the percentage of ferrum rises to 15, then the mineral is referred to as ferrosilite. Today enstatite, along with ferrosilite, is considered orthopyroxene of variable composition. Hypersthene, completely devoid of iron impurities, is a rarity.

Magnesium silicate is also known under such names as "labradorite blende", "augite-bronzite", "saboite". Jewelers and gemologists have a double name "enstatite-hypersthene".

Hypersthene rarely occurs as crystals. Most often, mineral deposits are solid masses, granular aggregates or inclusions. Sources of the gem are also meteorites of stone or iron origin. The main deposits are considered areas:

The island of Sri Lanka, Iran and Norway are also included in the list of large deposits. However, it is on these lands that rare collection samples of enstatite are found - indistinctly formed crystals of large sizes.

We advise you to read:  Aegirine - description and varieties of the mineral, magical and healing properties, to whom the stone suits 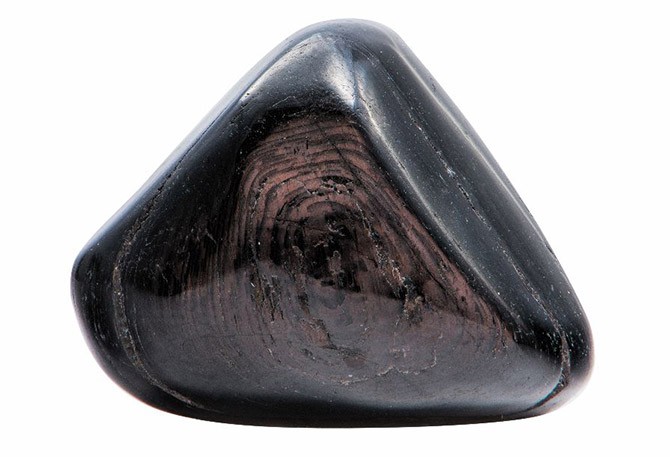 Hypersthene is a silicate of magnesium and iron, where magnesium acts as an invariable component of the mineral. The color palette ranges from jet black to black with hints of green or brown. The content of certain impurities changes the shades of the stone.

Enstatite exhibits noticeable pleochroism in a section cut off in a longitudinal section. With a change in the angle of incidence of the light beam, the violet-red color of the plate changes to yellow-red, gradually becoming muted green. Hypersthene does not lend itself to acid attack, however, it is easily melted with a blowpipe, forming glass (often magnetic) of green-black color.

Depending on the chemical composition, the following types of hypersthene are distinguished:

The vast majority of hypersthenes are translucent or opaque stones. Pure, transparent crystals of the mineral are very rare, which determines the high cost and collection value of the gem.

The healing properties of the mineral

The main healing purpose of the mineral is the restoration, normalization of the functions of internal organs. Therefore, the stone can debug the work:

Lithotherapists actively use hypersthene for nervous disorders, since the stone has sedative properties. Cheerfulness and cheerfulness of spirit return to the person. In addition, enstatite prevents the development of complex mental illnesses.

Instances of green shades help restore visual acuity. Such a gem is also useful for people suffering from the influence of weather conditions, as it can alleviate migraine attacks or drops in blood pressure.

We advise you to read:  Carnelian - varieties of stone, healing and magical properties, jewelry and price, who suits

Dark nuggets of brown tones are responsible for strengthening the immune forces of the body. Hypersten copes with viruses and colds, while improving metabolic processes. Enstatite is also useful for people suffering from excess weight.

Hypersthene is considered a powerful magical protector, as it absorbed the energy of the sun and fire. Various talismans are made from stone. However, the mineral is little used for rituals. Some esotericists are sure that enstatite does not work as a talisman directly, like other minerals. First of all, this gem is a talisman of personal internal energy.

Hypersthene has a special, rare and useful property - a gem can smoothly, imperceptibly "reprogram" the consciousness of its owner. Enstatite stabilizes human thinking and, if necessary, builds or rebuilds the inner core bit by bit. This enables a person to take a different look at himself, at the world around him. 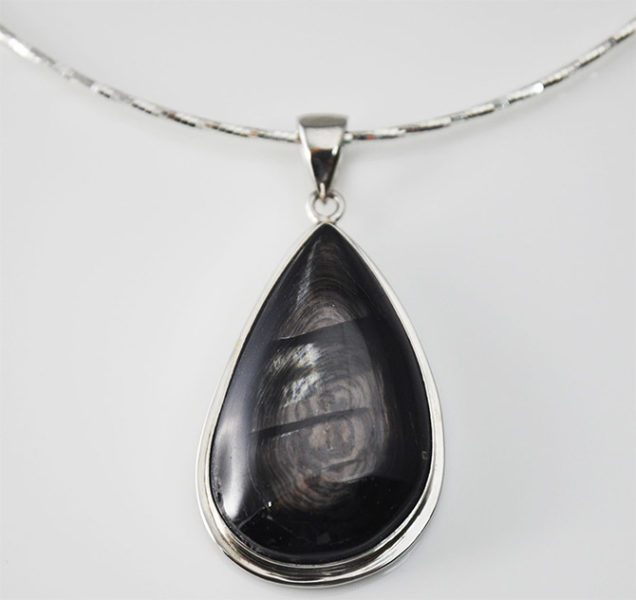 This property of hypersthene makes the stone an indispensable material for balancing amulets. This means that the first thing the stone works with when it finds its owner is the energy reserve of a person. The gem not only calculates the amount of all vital energy, replenishing lost strength. The main task that the mineral performs is to find an energy leak, helping a person close these channels. Only when the energy ceases to go "to nowhere", a person with a full supply of vitality begins to work on the realization of his goals. In fact, hypersthene is a source of important information, which is the foundation of all subsequent changes.

Hypersthenes are most popular among jewelers and stone-cutters. Jewelers most often use one of the varieties of the mineral - bronzite. Transparent Iranian, Tanzanian crystals are the most expensive. They are faceted, set in precious metals and sold to Europeans and Americans at a price of $700 per carat.

Hypersthene is resistant to human skin secretions (sweat, grease). In addition, the nugget retains its shimmering brilliance even when crushed. Thanks to these properties, enstatite has found application in cosmetology - mineral powder is added to eye shadow, powder, blush.

We advise you to read:  Jadeite - description and varieties, medicinal and magical properties, who suits

Hypersthene is considered a stone of medium hardness, as well as increased fragility. Do not subject the nugget to mechanical damage (drops, shocks). Sharp or harder objects will scratch the stone. Despite the passive behavior in an acidic environment, contact of the mineral with household chemicals, alkalis or acids should still be avoided. High temperatures are also detrimental to enstatite, although exposure to direct sunlight is helpful in energizing the stone. 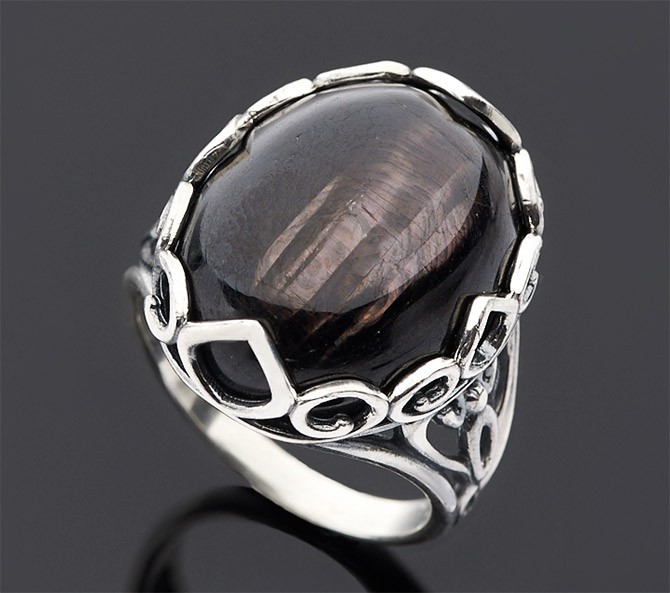 It is best to clean the stone with a simple soapy solution and a soft cloth. For more severe contamination, the fabric is replaced with a brush with a soft bristle. It is better to store hypersthenes separately, in a special bag for jewelry or in a box with soft walls.

Astrologers consider enstatite to be one of the universal minerals that will not harm any of the zodiac signs.

Of the twelve existing zodiac constellations, the mineral has the warmest relationship with representatives of the family:

Not so long ago, in addition to the known deposits, deposits of bronzite (the most common variety of hypersthene) were discovered on the lands of Antarctica, as well as on the Moon. Samples of lunar bronzite came to Earth thanks to Russian cosmonauts and American astronauts. In addition to chromium, a high content of titanium was found in lunar specimens.

On the territory of the Canadian province of Ontario, the Royal Museum houses the largest transparent hypersthene found, weighing 12,97 carats. The second large crystal of the mineral adorns the collection of the Smithsonian Research Institute in the USA. The weight of the nugget is 11 carats.

Rare collectible and especially valuable specimens of hypersthene are samples in which iron oxides have formed a bizarre floral ornament or landscape pattern.

Ornamental
Haliotis is a stone of organic origin, which is a shell of a gastropod mollusk of the Haliotidae family. These

Ornamental
Pinkish shades of a mineral with thin, sinuous lines of the pattern will captivate with its charms, awakening in the depths

Ornamental
Bronzite is a representative of a numerous class of silicates. A distinctive feature of a semi-precious and ornamental gem is a characteristic

Ornamental
Dumortierite is an aluminum borosilicate, an island-type crystal structure, an unusually beautiful mineral, young compared to other gems.

Ornamental
Shattukite is one of the most unusual in the mineral kingdom. It is overshadowed by the more "deserved" chrysocolla

Ornamental
The sphene stone is one of the rarest, available to jewelers for only a decade and a half, when geologists

Ornamental
Aegirine is a black mineral from the group of monoclinic pyroxenes, which has magical and healing properties. He
Add a comment Отменить ответ
We use cookies on our website to give you the most relevant experience by remembering your preferences and repeat visits. By clicking "Accept", you consent to the use of ALL the cookies.
Don't sell my personal information.
Cookie SettingsAccept
Manage consents