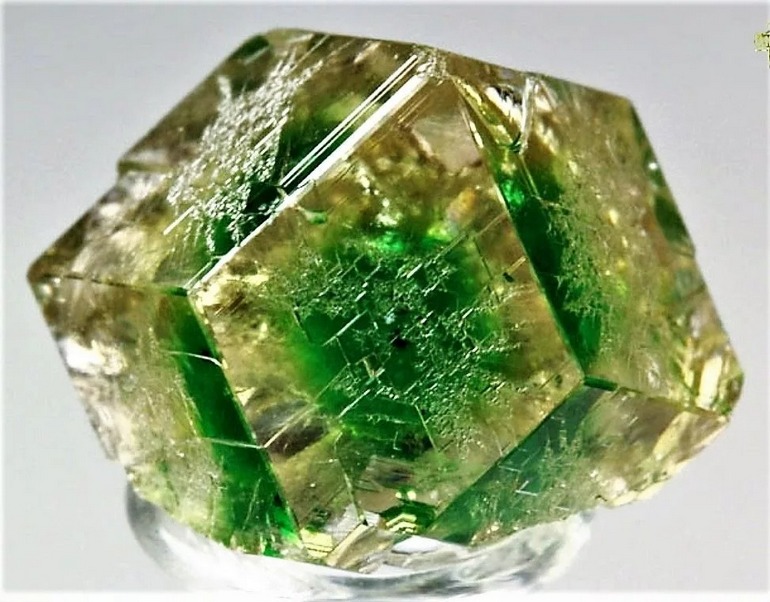 Grossular is one of the many varieties of garnet, a calcium-aluminum mineral. This gem is not as famous as its garnet counterparts. However, a fragile nugget with a rich color palette of the most delicate shades has qualities that are useful for humans.

The first find of grossular is dated 1790. Scientist E. Laxman, working in Sakha-Yakutia, discovered a mineral on the banks of the Vilyuy River. The nugget received its official name in 1808 thanks to A. Werner. The name of the gem is translated from Latin as "gooseberry", since the first specimens found looked like this berry. A nugget is formed under the influence of relatively high temperatures in metamorphic rocks of contact or regional origin.

In the countries of the East, it was customary to use the gem for medicinal purposes, as a blood thinner. Ancient healers used stones of green hues to improve the course of pregnancy and facilitate childbirth. It is believed that this type of pomegranate helps men of military professions to concentrate energy and strength. And the effectiveness of the stone is higher if a person has dark skin.

Due to the prevalence of sedimentary rocks (dolomites, limestones, Cretaceous deposits) and vast areas of volcanic activity, grossulars are found everywhere on our planet. The best deposits are:

Russia is also rich in worthy specimens of the mineral. The distribution areas of the Russian grossular are quite extensive - Karelia, the Urals, the Caucasus, Siberia, Sakha-Yakutia, the Krasnoyarsk and Primorsky Territories, the Murmansk Region.

The main component of grossular is calcium oxide, along with silicon and aluminum dioxides. The mineral is saturated with various impurities, which leads to a rich color variety. Inclusions are elements such as titanium, manganese, chromium, iron.

Grossular is formed by small crystals, often twinned. Despite the high hardness index, the mineral is brittle. It melts at 1260°C. Grossular powder mixed with cold water gives an alkaline reaction.

Varieties of grossular are classified depending on the color. For each shade, a certain element in the composition of the mineral is responsible. A gem without inclusions will be transparent. Each stone from this family has its own name:

There are also beautiful and valuable deep green grossulars called Pakistani emeralds. And green with a golden sheen stones from West Africa are known as mali garnets.

In alternative medicine, green grossulars are widely used. These gems are used for problems such as:

With skin diseases or allergic reactions, a gem of warm colors - orange or yellow - will help to cope. Healers also claim that the grossular crystal, squeezed in the palm of your hand, relieves toothache.

Grossular is known in the esoteric world as a mineral of peace and tranquility. This nugget helps to build relationships between family members, friends, build communication with new people. With such a talisman, it is easier to get the location of the interlocutor. At the same time, the stone works as a guard against damage, the evil eye or other negativity.

In the event of complex life troubles, grossular restrains anxiety, fear and panic, clarifies the mind, clearing the way for making the right decisions. Thus, this nugget becomes an indispensable amulet for those who are overcome by stress, depression, emotional burnout.

In addition, the gem sharpens intuition, helps develop logical thinking, which is important for people in research professions.

Grossular is in excellent contact with other minerals and makes its owner equally sociable. Thanks to this mineral, everyone will be able to discover hitherto unknown talents, learn to dream and look positively at this world. Such a talisman will help its owner to remain pacified externally and filled with energy internally.

Most often, transparent stones are used to create jewelry, setting faceted crystals in gold or silver. The cost of such products is different:

Necklaces, brooches, rings, buckles are also created with the mineral.

Garnets, like many of its varieties, are often counterfeited, passing off cheap minerals or glass as them. Only an experienced specialist can distinguish a grossular from a fake. It is independently possible to identify only a fake made of glass by the following signs:

Most of the grossulars are rarely large. A standard crystal reaches a size of 1 centimeter. Stones measuring 3-4 cm are very rare.

Grossular must be protected from bumps, falls and household chemicals. Use soapy water and a soft cloth for cleaning. The stone does not like direct sunlight and sudden changes in temperature, so it is worth storing products in a separate container with an appropriate microclimate.

Grossular is universal in every way. Each of the Zodiacs will be able to find a common language with this stone.

The best relationships are with those who are born: 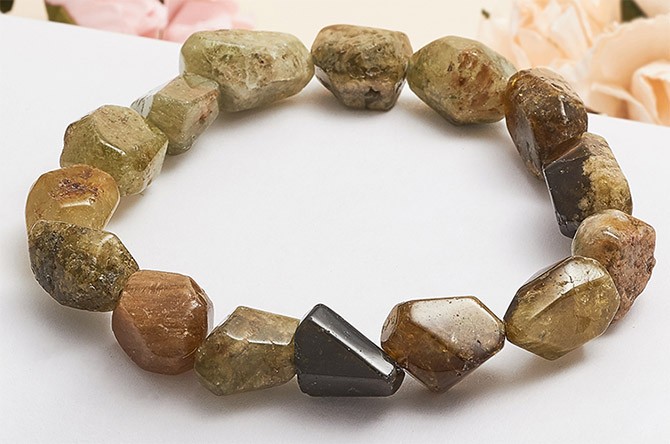 The rest of the signs will benefit from friendship with the grossular as follows:

The only sign with which it is very difficult for a grossular to find a common language is Aries. The nature of people born under this constellation is absolutely opposite to the essence of the gem. However, having felt the benevolence of Aries, the mineral will definitely give its full energy to the new owner.

Despite its low popularity, grossular has left a noticeable mark in history. The British, who were known as colonizers, felt the hatred of the Indian natives in conjunction with the natural forces of the mineral. The Indians knew that the wounds that the mineral leaves on the human body are hard and take a long time to heal.

Therefore, in order to drive out the enslavers, the inhabitants of the colonial lands produced grossular bullets. The plan worked - the British left the colony. Since then, for Europeans, the grossular has become a symbol of purity of thought.

We advise you to read:  Onyx - description and types, magical and healing properties of the mineral, who suits
ornamental stones Source
You may also be interested.

Ornamental 0 89 views
Unakite is a recently discovered variety of granite. Nature has endowed this mineral with a unique pattern.

Ornamental 0 81 views
Mookaite is a rare stone that pleases the eye with amazing shades. It is used to make decorative souvenirs,

Ornamental 0 67 views
This is a semi-precious stone, or rather, ornamental. However, the stone is rare. Basically, mookait -

Ornamental 0 83 views
Alunite or alum stone - is formed in the upper layers of the earth's crust, as a result of low-temperature

Ornamental 0 79 views
To reveal the secret of eternal love, many who want to find boundless happiness strive. For this purpose, use