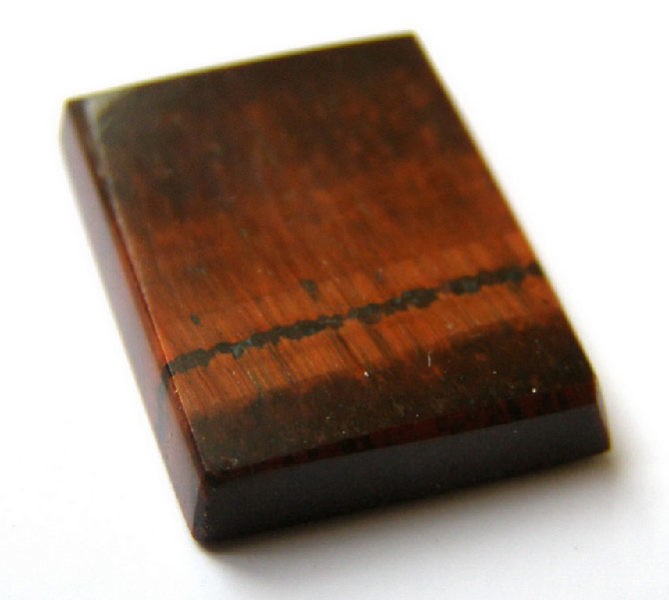 One of the minerals belonging to the "eye quartz" family, the bull's eye has been revered by people since antiquity. Nature tried so that the conditions for the birth of a gem made the stone extraordinarily beautiful and attractive. The nugget, resembling the eye of a furious bull, was used by the ancient inhabitants of the Earth for magical and medicinal purposes, the descriptions of which have come down to the present.

Mineralogists refer to the bull's eye as an independent subspecies of "eye" quartz. However, among scientists there is an opinion that the nugget is nothing more than a tiger's eye, succumbing to the influence of high temperatures. At the same time, the color scheme of the stone changed from golden yellow to red-brown, but the properties remained the same.

The era of antiquity gave the mineral popularity. The ancient Romans revered the gem, considering the stone a strong amulet. The clothes of warriors, the harness of their horses, weapons - all these attributes were decorated with a bull's eye. Roman men firmly believed that in this way they protect themselves in campaigns and battles from death. 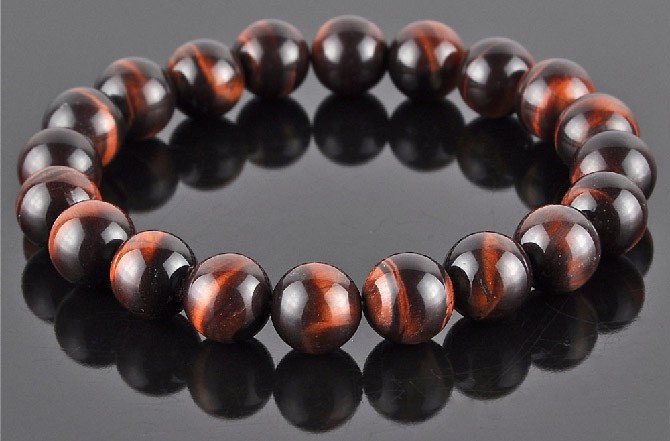 Do you know that one of the ancient legends tells how a gem stopped a ferocious bull rushing furiously at a person. The beast froze, as if rooted to the ground, when it noticed the stone around the man's neck. The aggressiveness of the animal instantly disappeared, and the shade of the bull's eyes exactly matched the color of the mineral.

The bull's eye has gained the status of a sacred stone among the Hindus. When performing the ritual of sacrifice, they put the mineral along with other items for the ceremony. Gem jewelry was presented to the gods during prayers.

The Indians used the nugget to protect their settlements from predators. To do this, in front of the entrance to the house, they laid out pieces of the mineral, collected in heaps, or surrounded the dwellings with stones. In addition, the inhabitants of India believed that the bull's eye absorbs the energy of the Sun, after giving it to a person. Another Indian belief tells about the stone's ability to warn the owner of danger or illness - the mineral becomes noticeably heavier.

The deposits of the bull's eye are located directly near the places of extraction of his fellow - the tiger's eye. Such finds are rich in countries of all world continents: 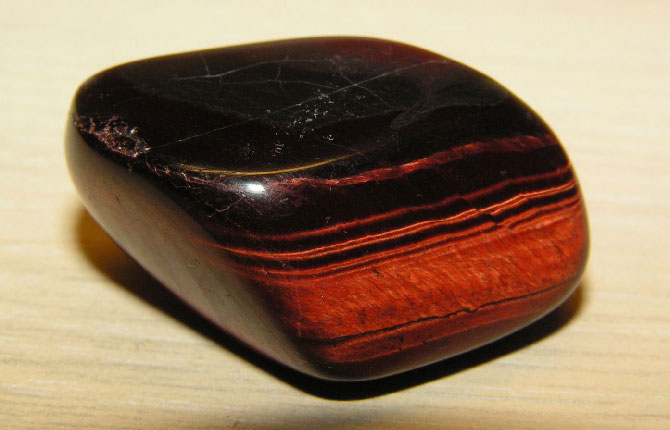 And also the mineral is mined in Asian countries and in southern Africa.

The structure of the bull's eye is strong and solid, the mineral does not transmit light. Like all representatives of the “eye” quartz family, the nugget is endowed with a strong brilliance and a characteristic vertical stripe along the entire length of the stone, which, after cutting, becomes similar to the pupil of a predatory animal.

The color of the natural mineral is heterogeneous. The chemical composition of the nugget includes Hematitewhich gives the stone an iridescent color. When mining, the following shades of the gem are found:

We advise you to read:  Apatite stone - varieties, magical and healing effects, jewelry and price

Depending on the content of other trace elements, there are specimens of burgundy and purple flowers.

The color of natural stone can be changed in two ways: 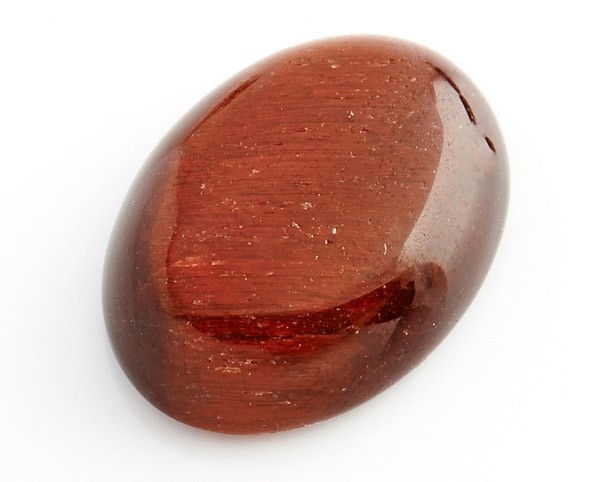 A natural gem attracts with its beauty, and the abilities that nature has endowed it with are truly amazing.

The healing power of the stone

The name of the nugget was not only because of the external resemblance to the eye of an animal. Since ancient times, the gem has been associated with a bull - a beast, health and power superior to other animals. Tactile contact with the stone brought recovery from many ailments. Modern lithotherapists have adopted from the ancients the knowledge of the possibilities of the bull's eye.

The strong healing energy of the stone is aimed at alleviating conditions and diseases such as: 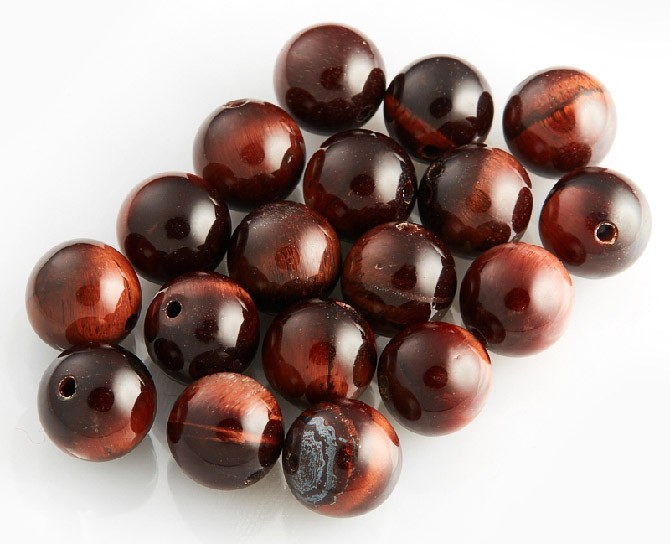 It is interesting! With a severe course of the disease, the bull's eye gives all the energy to cure the disease, so it happens that after a complete recovery, the stone "dies", losing its strength, sometimes even crumbling into small particles.

You can restore the strength of a “not collapsed” stone by burying it in the ground for a while. If the disease was fatal, such a recovery may take several years.

An important area of ​​action of the mineral is the fight against bad habits. The bull's eye will energetically help a person on the path to getting rid of drug addiction or alcoholism. A pendant or earrings with a gem contributes to the rapid withdrawal from nicotine.

Important! If the mineral is framed in a metal frame, it may lose its healing power.

The magical properties of the bull's eye stone

In the world of magic, the bull's eye is credited with an amazing ability to influence the human mind. With the help of this stone, soothsayers establish a space-time connection, see the mysterious sides of the human subconscious. Since the mineral is very strong energetically, it is recommended to remove it from time to time to those whose vital energy is already overflowing. 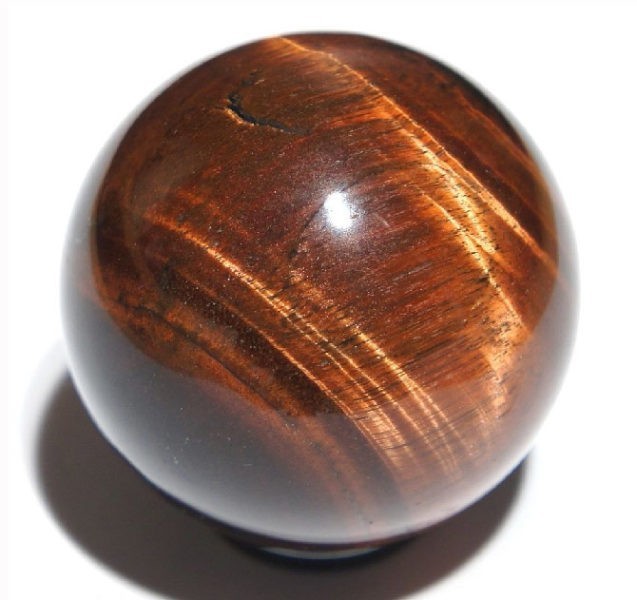 The bull's eye acts as a powerful amulet, especially for places of residence or work. The mineral cleanses the entire surrounding space of negativity, helps to find harmony in communication between relatives or employees of the team, removes misfortunes and misfortunes. From the point of view of the teachings of Feng Shui, the gem should be located in plain sight in order to actively interact with the energy of the room and the people in it.

For people whose work is connected with the flow of finance, it is especially important to acquire an amulet from a bull's eye. Such a talisman can warn the owner of failures, future problems with financial transactions. In this case, the mineral fades, loses its radiance. These amulet signals cannot be ignored, on the contrary, it is worth paying special attention to them in order to avoid serious troubles.

We advise you to read:  Fire opal - the beauty and magic of a unique stone

There is also an opinion that the gem can attract financial well-being. To do this, they wear a necklace with a bull's eye as a decoration, or put a talisman in a purse or bag where the money is. The mineral will help save existing funds and accumulate new ones. 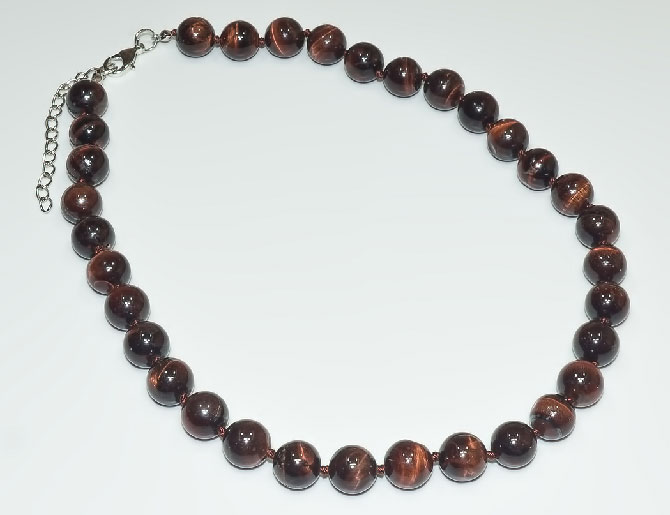 Important! The bedroom is not a place to store a mineral. The bull's eye is able to draw energy from a person while he is sleeping, which is fraught with the loss of all vitality reserves. Therefore, the gem for the rest should be stored in another room.

For carefree people who have a holiday every day, it is better not to wear mineral amulets. The bull's eye is very strong energetically and the mineral will simply begin to oppress a person with such a mental organization, causing overwork. An exception may be the occurrence of a life difficulty, to overcome which you will need the power of the amulet.

The bull's eye is a mineral of decisiveness, immediate action. Slow people under the influence of the gem become more decisive, boldly moving towards the accomplishment of deeds. The stone loves people endowed with a character corresponding to it - purposeful, active, independent. The mineral does not favor lazy individuals. As a rule, such people often lose their talismans. 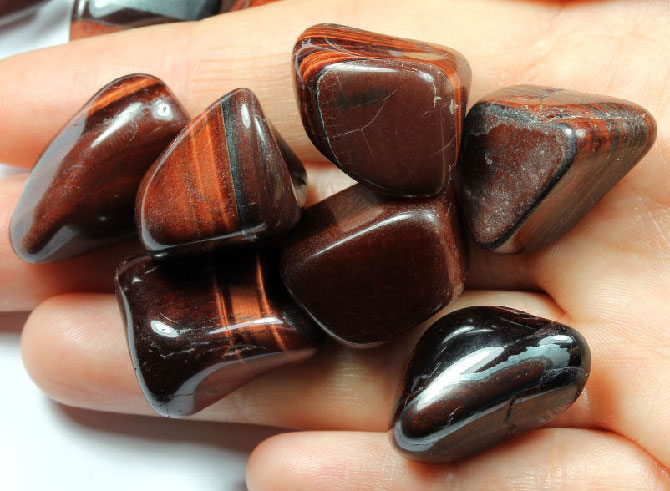 However, whoever is the owner of the mineral, with prolonged contact, a person will feel heaviness, psychological discomfort. This is the influence of the strong energy of the nugget, therefore it is recommended to wear a talisman only when its support is really needed.

Compatibility with other minerals

The bull's eye is the stone of the planet Mars. Given the planetary "commonwealth", the mineral does not like proximity to the stones of the Sun, Moon and Jupiter, including:

Relations with the wards of Mercury and Uranus also do not add up:

Friendly planets for Mars are Pluto and Venus, which include such minerals:

The friendliness of the patron planets is undoubtedly an important aspect. But it is worth remembering that the bull's eye is a strong, independent mineral. This nugget is recommended to be worn separately from other stones, because it will suppress the energy of a weaker fellow, and “disagreements” will arise with a stone of similar strength, which will negatively affect the human condition.

The bull's eye is considered an ornamental stone, but jewelers love to work with the gem as much as with precious stones. This nugget is framed in precious metals, creating pendants, necklaces, rings and earrings of indescribable beauty.

Well-known world brands Roberto Coin and John Hardy presented unusual necklaces decorated with impressive minerals to connoisseurs from high society. We especially love the bull's eye designers of jewelry houses, whose specialization is the manufacture of jewelry from solid stones.

In addition to expensive collectible items, inexpensive jewelry is made from the gem, accessible to every woman:

We advise you to read:  Kyanite - description and varieties, magical and medicinal properties of the stone, jewelry and their price

Such jewelry complements the image, allowing the fair sex to add attractiveness to the image.

How to distinguish a fake?

Eye quartz is very popular with craftsmen, but they are not available to everyone in the right quantity. Therefore, fakes are found on the jewelry market: 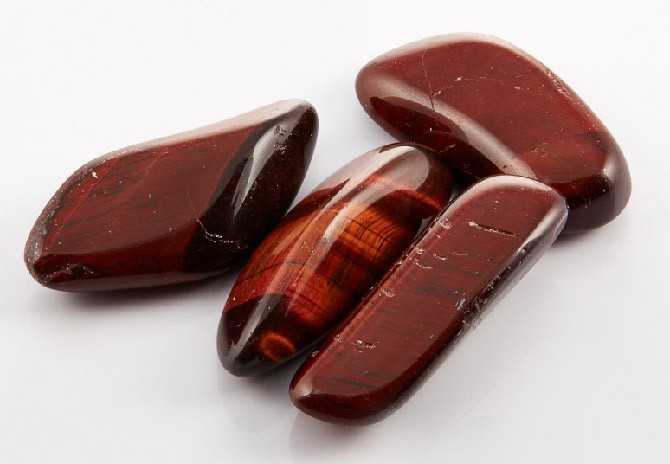 Only a gemologist can accurately distinguish a fake from a natural stone using the appropriate equipment.

How to wear and care?

It is better to follow simple recommendations, starting with the purchase:

Regarding the selection of jewelry for clothes, they are guided by standard rules: 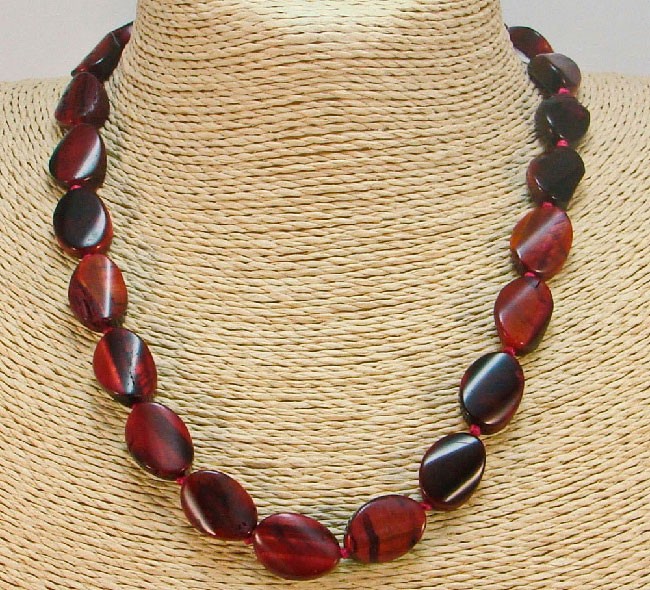 A ring with a mineral will add gloss to a casual business look. And to attract success in doing business, such jewelry should be worn on the left hand.

As for care, the gem is very unpretentious. It can be stored with other jewelry, and water and a soft cloth are suitable for cleaning.

From the point of view of astrology, the gem will not harm any of the constellations, as it chooses the owner not by the stars, but by personal qualities.

However, the sign of Scorpio is his favorite, as its representatives are energetic, purposeful, powerful and strong personalities. The nugget will increase these qualities, attracting good luck to the owner. The mineral will help to find balance in a stressful situation, protect from the evil eye, and attract financial well-being. 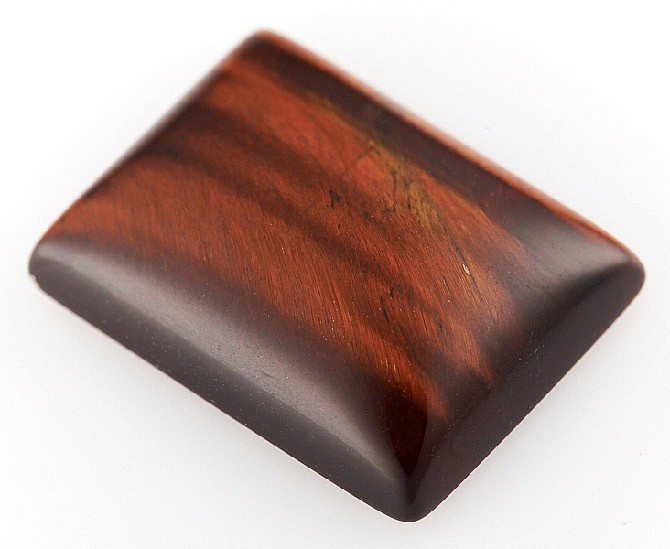 The name patronized by the mineral is Paul. An amulet with a bull's eye will endow this man with energy support that will accompany the owner on the way to the intended goals. With the help of the mineral, Paul will assert himself, gain willpower and determination, which are so necessary to overcome difficulties.

The bull's eye has become an indispensable magical and healing support for many peoples of many times. You should not seek support for someone who does not believe in the power of the mineral, who is weak in will and character. The stone will repel such an owner. This gem needs a master, equal in spirit, with the strength, will and perseverance of a bull - an animal that gave the stone not only a name, but also endless possibilities.

Ornamental 0 76 views
Sugilite is a purple mineral that belongs to silicates. It is a young gem with many names and

Ornamental 0 266 views
Nowadays, quite a large number of people are interested in the magic and properties of stones. After all, they