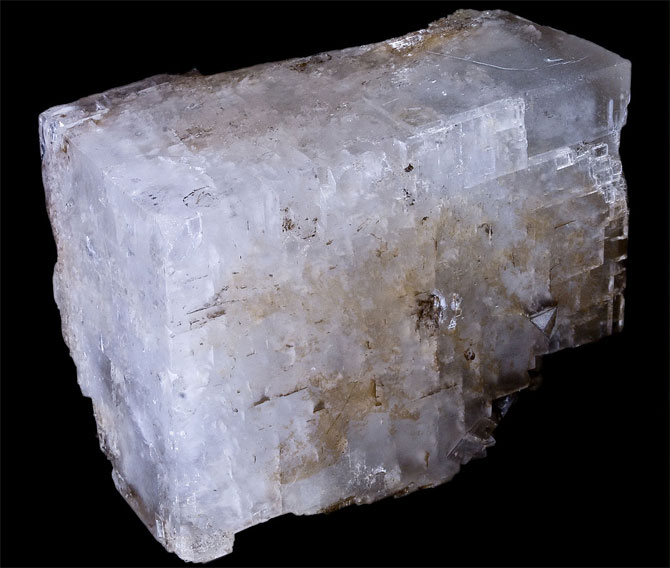 The treasury of the planet is full of enchanting beauty with gems. Magnesite is a natural stone that is the least noticeable when assessed at first glance. However, its healing value is superior to other crystals. Due to the wide range of uses, it is considered the most sought after, unlike all known mineral rocks.

The ancient origin of magnesite is a historical fact. Its healing, magical, and also refractory properties were known in antiquity, people could use the mineral for its intended purpose. 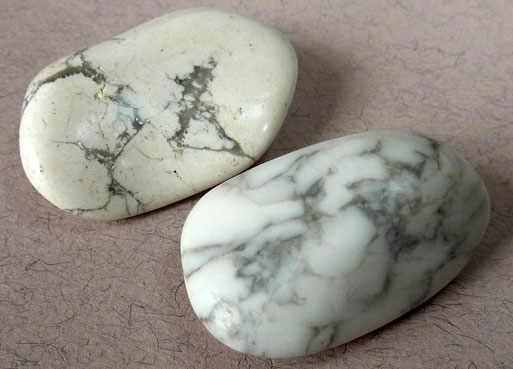 The first fossil was discovered in Magnasia, which is located in Greece. One of the largest mines was discovered there. The breed contained in them aroused interest among the local population. They tried to burn the ore, as a result of which it turned out that it can withstand high temperatures. Since then, magnesite has been used as a refractory material.

Its deposits are found in the form of large layers, thanks to which it has found application in some industrial sectors. In the largest deposits, at medium and shallow depths, such masses are formed as a result of hydrothermal processes. Crystal-granular formations of the mineral were exposed to hot alkaline solutions, resulting in the formation of ore.

Hydrothermal crystals of value are found in mineral formations adjacent to magnesite. Cryptocrystalline magnesite is formed by the weathering of rocks.

During the chemical reaction of water, air and mineral mass, magnesia silicates are destroyed, which contributes to the precipitation of magnesite in pores and cracks in which groundwater stagnates. In a mineral formed in this way, there are impurities of Opal and Dolomite, as indicated by veinlets.

Magnesite with hydromagnesite is found in sedimentary rocks of salt-bearing deposits; such fossils are of interest for jewelry production.

Known large-scale deposits are located in Russia. The Satka mines are rich in hydrothermal magnesite. Fossils are hundreds of millions of years old. 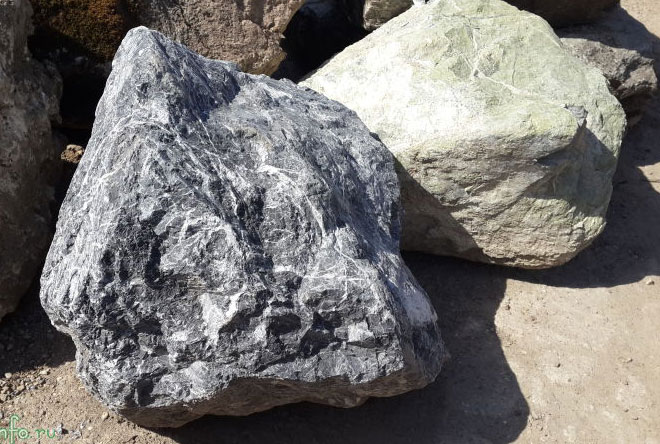 The Far East is famous for its minerals, the mineral is mined in South Manchuria. Ore deposits are found in Korea, Austria, Czechoslovakia. Minerals are mined in mines. Euboea, in Greece, also in the Urals in the Shambarovsk mine. Large deposits of magnesite, layers 500 meters thick and tens of kilometers long, are located in the Southern Urals, in the Satka deposits, in China, on the Liaodong Island.

Magnesite is a brittle mineral, with a dull, dull or vitreous luster. The crystals are dense, granular, have a trigonal or rhombohedral shape. Magnesium carbonate is sparingly soluble in water, decomposes in heated acid and reacts to an increase in temperature.

We advise you to read:  Chalcopyrite - description, magical and healing properties of the mineral, who is suitable according to the zodiac

The healing properties of magnesite

Magnesite is endowed with healing properties, the energy vibrations of the mineral gently affect a person, calming the nervous system, improving the functioning of the whole organism. The healing stone helps to relieve muscle spasms and general tension, and is known to help reduce the activity of complex premenstrual syndrome, which occurs periodically in some women. 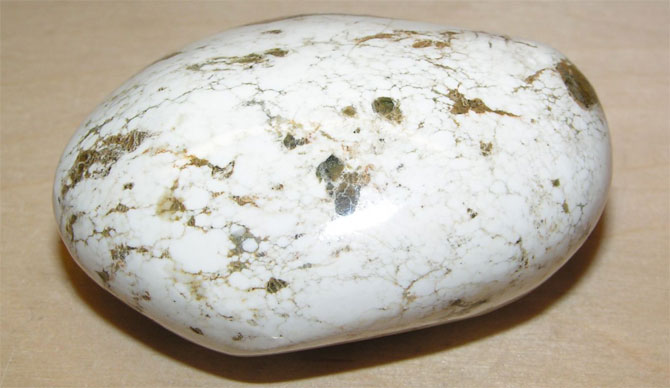 A gem is used for cleansing, during which toxins are removed from the body, and the functioning of the gastrointestinal tract improves. As a result of cleansing, the work of the sebaceous glands improves, and unpleasant body odor disappears.

The power of the stone is able to relieve headaches, cope with a migraine attack, and also soothes acute toothache. When symptoms of arthritis appear, magnesite should be carried with you, this will help prevent the development of the disease.

Magnesite is a wonderful relaxing and calming stone that can be used in meditation. The pacifying effect of the stone will help you quickly plunge into a meditative state, feel lightness and weightlessness in the body.

It is a strong stone that awakens psychic abilities. In the event of an anxiety, excitement or fear, if you have a stone with you, these sensations quickly disappear. It enhances self-confidence and helps to cope with stressful situations.

The magical properties of magnesite stone

This is a magical crystal with powerful vibrations that positively affect a person's energy and situations in his life. Its metaphysical properties and magical power can change lives depending on what the owner of the stone wants. 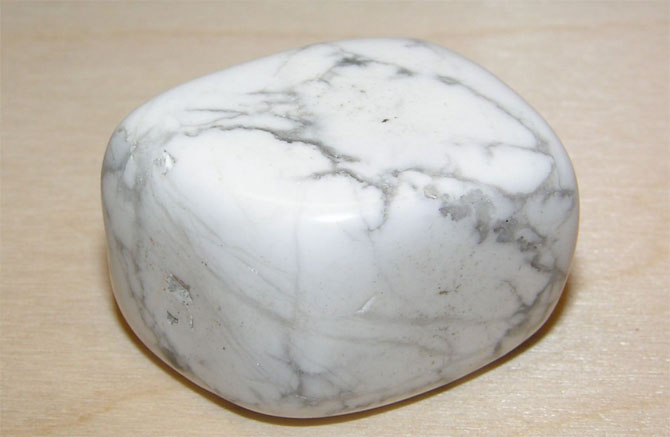 The mineral contributes to the harmonization of the inner world, helps to tune in to positive and learn to make the right choice. The vibrations of the stone help increase self-esteem and live your life in accordance with your own needs and aspirations.

He helps those who are psychically and mentally ready to discover potential and if this decision is consistent with the will of higher powers. The vibration of this crystal helps to connect with the forces of the subtle world, spiritual guides.

Its action can awaken paranormal abilities that are not even suspected. Best of all, the magnesite magic stone affects the development of clairvoyant abilities, multidimensional or psychic vision. With the energetic support of this stone, visions are likely to be more distinct, with exceptional clarity.

Artists are more emotional than most of their environment, and they simply need the appropriate energy supply. The magic crystal will help them to be inspired, filled with positive energy. Magnesite helps to develop creative abilities for those who are fond of painting, revealing the ability to visualize more colorfully and splash out everything that the imagination draws on paper.

If this gem is applied to the sixth chakra, in the forehead area and to the seventh, thousand petal, just above the crown of the head, then a pulsation is felt. A clear sensation if you put a stone in the area of ​​\uXNUMXb\uXNUMXbthe "third eye" during meditation. The power of the stone opens the chakras of the crown, which allows a person to feel and understand the people around him. During meditation, keep the crystal with you, then a person with pure thoughts, good intentions and sincere faith in himself will be rewarded in the form of amazing discoveries.

We advise you to read:  Cacholong stone - description, properties and types, who suits, decorations and price

Deciding that magnesite will serve as an amulet, it is important to correctly understand which mineral will have to be in contact with. A stone of such amazing power is capable of performing the tasks of a talisman, it carries a charge of great power, which you will have to learn to control. 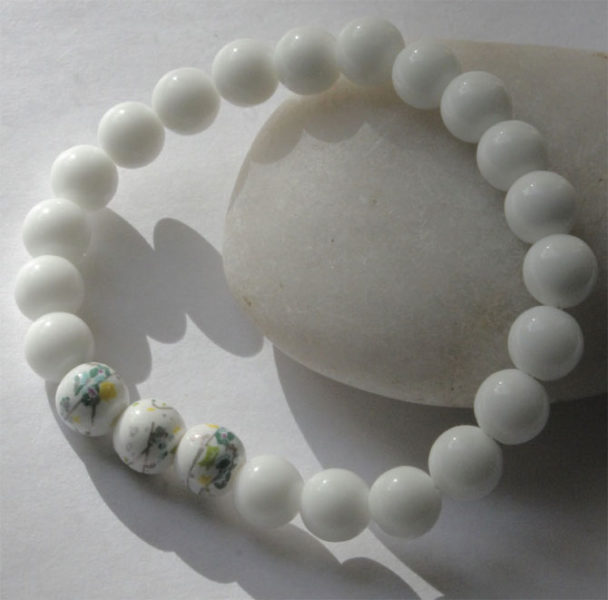 They charge the mineral, take care of it and always keep it with you, and he pays for it with kindness. The jewelry stone is not combined with all gems, the set should be selected carefully. It is important to consider the compatibility of the mineral with the magical properties of other gems. At first, until they “married” with their amulet, it is better not to complete jewelry with a stone of a different breed.

The use of a gem should be beneficial, therefore, jewelry is selected such that will complement each other and help solve specific problems. It is known that magnesite protects the energy of a person and prevents all sorts of troubles from appearing in life. It is advisable to use the amulet with a stone as often as possible, try not to part with it.

Especially when traveling, when performing important tasks that require high energy costs. The price of jewelry with magnesite is affordable, everyone can afford to buy them. For magical protection, you can buy a stone even without a frame: 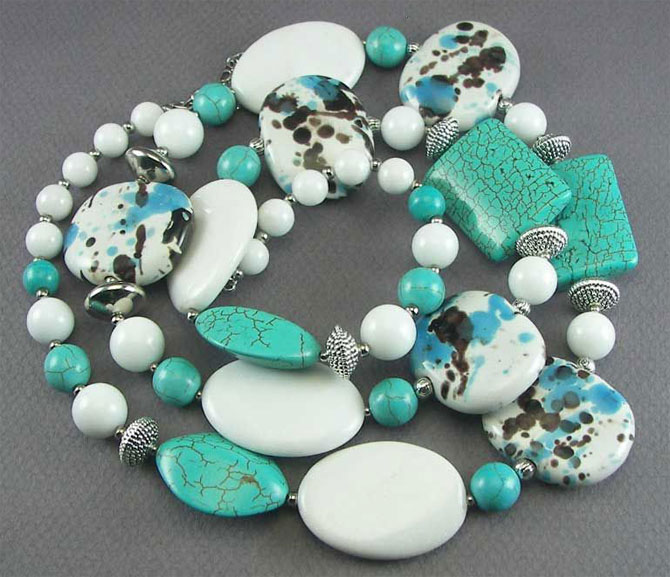 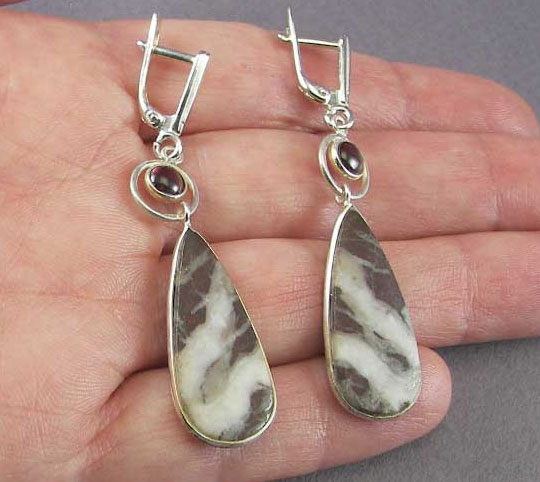 An ornamental magnesite stone, in the form of a crystal, is used in jewelry making. Bright yellow precious crystals are mined in Australia and Brazil.

White magnesite is more common, it is mined in many deposits. The mineral is also pink, brown, gray or yellow, it all depends on the impurities that make up its composition. If the iron content predominates, the stone looks brownish, and may be a rich yellow color.

This mineral accepts dye well, therefore magnesite beads painted in various colors are very often found on sale. After that, the stone retains its healing and magical properties. Jewelry with a multi-colored mineral is very popular among connoisseurs of gems. The ornamental stone used for finishing the facades of houses is usually left in a natural color in the design of the room.

We advise you to read:  Charoite - description and varieties, magical and healing properties, decorations and price

How to distinguish a fake?

The mineral is mainly used to make jewelry that is not of value in jewelry art. An exception is the varieties of magnesite in the form of precious crystals. Sometimes imitations of red coral, turquoise and lapis lazuli are made from the mineral by staining.

For example, turquoise was imitated from magnesite in order to distinguish the original from a fake on its own, this would require a microscope. There are tips to help you avoid the scammers' trap.

Natural stones are better to buy in specialized stores. To verify the originality of the mineral, a certificate is requested proving the authenticity of the gem.

The gem requires care, like any other minerals. Magnesite is best kept from direct sunlight, especially after staining, it is able to lose brightness. If a stone is left in water for a long time, it fills with moisture, swells, and it is better to protect it from this. Rinse under running water and dry thoroughly. The gem is fragile, try to avoid bumps and falls.

Magnesite is a strong stone that many do not know about. Not very pretty, and looks unassuming. But there is an amazing property that it has, help in building relationships. If you keep the mineral with you, for example, at the time of a showdown, everything will go well and there is no doubt about it.

It has always mattered to a person what the stars have prepared for him, what astrological properties of a given stone one has to rely on. The list demonstrates the predisposition of the stone, who may be more suitable, and who is contraindicated in using it. 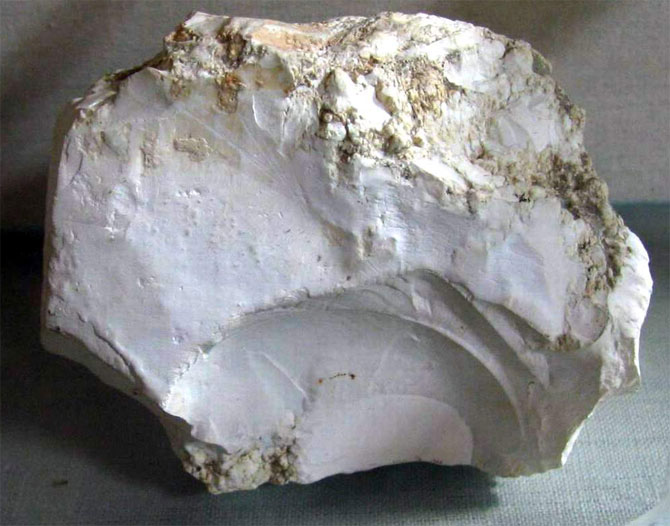 For other signs of the zodiac circle, magnesite will be a protection against negative influences. The energy of the stone helps to objectively assess the situation, eliminates illusions.

The stone helps to cope with emotions, this applies to relationships in which a critical moment comes.

The mineral has the strongest calming property. For those who have restless sleep, it is recommended to put it under the pillow, which will give peace and tranquility, as well as excellent rest. This stone is worthy of any collection.

Ornamental 0 75 views
Sugilite is a purple mineral that belongs to silicates. It is a young gem with many names and

Ornamental 0 118 views
One of the minerals belonging to the "eye quartz" family, the bull's eye has been revered by people since