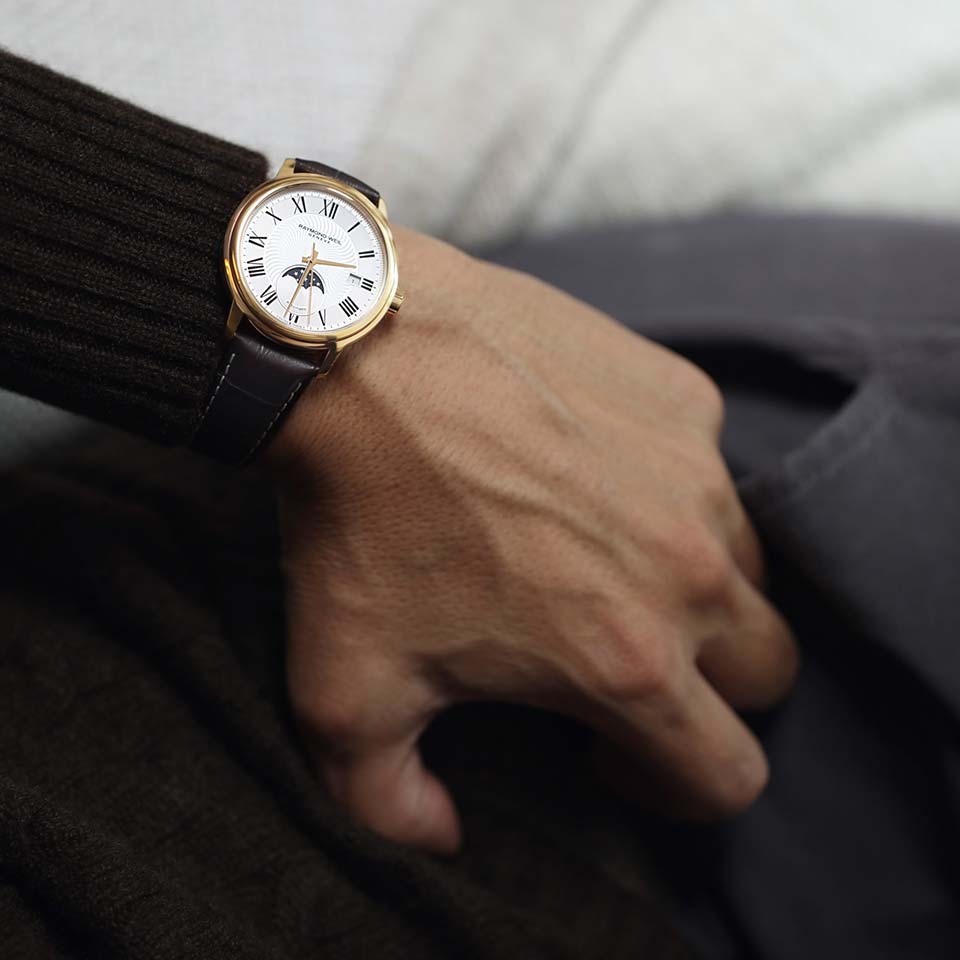 The moon phase indicator is an interesting complication. Other astronomical indicators are surprising, even puzzling. Not everyone can comprehend the equation of time. We simply do not notice sidereal time in everyday life; the index of sunrise and sunset will not enrich us with useful knowledge. But the moon phase indicator is a complication, if not the most, then still very common: involuntarily you will believe in its practical value. However, this device, so widespread, is remarkable only for its useless splendor, because it is no more practical than the brilliance of diamonds or the colorfulness of a peacock's tail. However, this was not always the case: for most of its history, mankind attached great importance to the growth and waning of the moon.

The influence of the lunar cycle on the behavior of animals and plants, not to mention man; the lunar calendar and the religious holidays calculated according to it - it is not surprising that, having barely appeared, watchmaking did not ignore the moon phase indicator. In other words, and today there are reasons why the alternation of the phases of the moon is not only home-grown occultists, magicians and neo-pagans. And this burning interest shows that the lunar spell, not subject to logic and comprehension, still captivates people and excites the imagination. 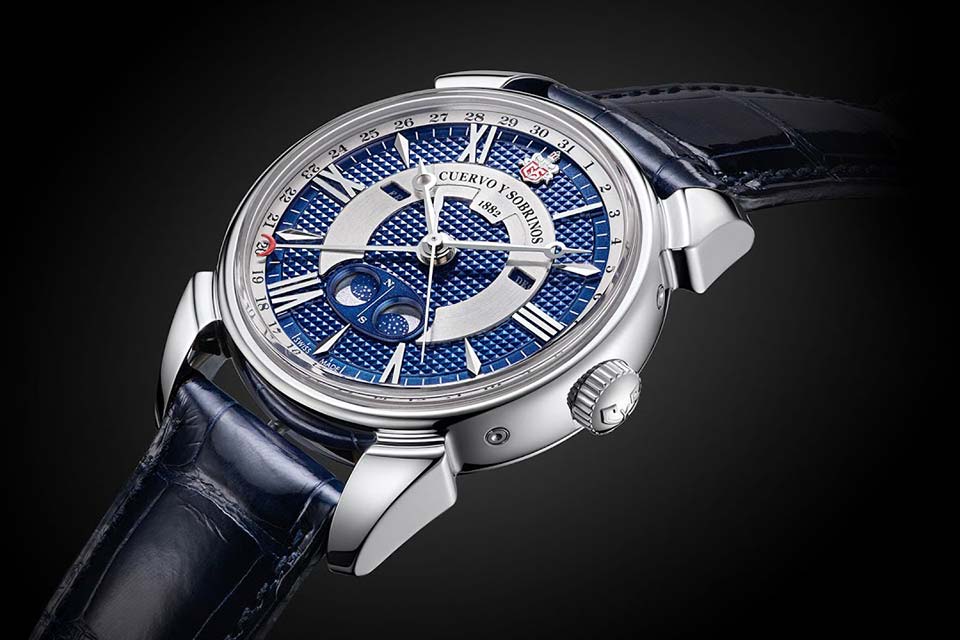 In the watches of the Historiador Doble Luna collection, as the name implies, above the “6 o’clock” there are two windows with the indication of the phases of the moon – it’s impossible to say with certainty which hemisphere you will be in when you decide to check the lunar calendar – so for your convenience, an indication is offered for both the South and the North.

The usual moon phase indicator is a rotating disc with two images of the moon, mounted under a slotted dial. As the disk rotates, one image is gradually hidden behind the edge of the slot - the Moon is going to damage - and then the second one also gradually appears from behind the other edge - the Moon is growing. The trouble is that the transmission mechanism of the clock is designed for one complete revolution per day, and the lunar month does not coincide in duration with the month of the solar calendar.

The so-called synodic month - the interval between similar phases of the moon - is approximately 29,5 solar days. If the lunar month lasted 29 or 30 days, everything would be simple: make a disk with 29 or 30 teeth, one tooth for every day, and that's it. But 29,5 ... You can't add half a tooth to the disc. The traditional way out is as follows: a disk with 59 teeth is made, one complete revolution of which must correspond to two lunar cycles. That is why there are two images of the Moon on the disk: while one disappears, the other is preparing to appear.

We advise you to read:  Mechanical calibers in the new Evo2 range from Mondaine

Alas, not everything in astronomy is so smooth: it is very necessary for the Universe to observe punctuality for the sake of our convenience. The lunar month, as already mentioned, is only approximately equal to 29.5 days of the solar calendar, which means that the readings of the lunar indicator are not entirely accurate. Failure in the testimony is not so significant - 1-2 days in two and a half years. The error in the readings of the lunar indicator should not cause you concern: it will be so insignificant that you will not even notice it. 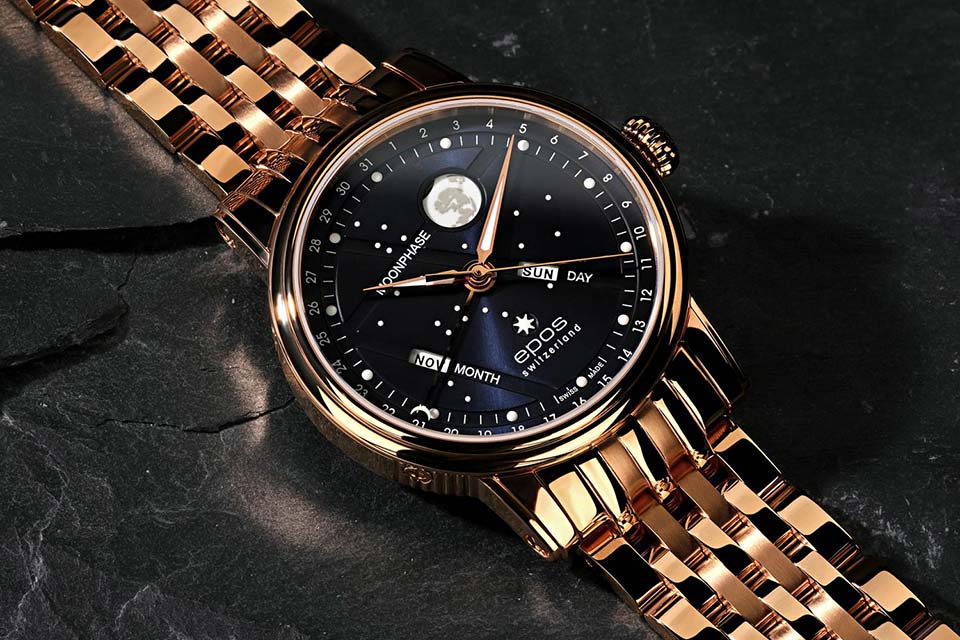 In the Epos Oeuvre d'Art North Star watch, the moon phase indicator shows what the nearest Earth satellite looks like when you look at it from the Northern Hemisphere of our planet.

Aspiring to perfection does not seek any other reward, except for its acquisition (at least, both connoisseurs of watches and their creators think so). However, in recent years, several new systems have emerged, whose manufacturers not only strived for perfection for the sake of perfection, but also wanted to create watches that are different from competitors' products. That's what free marketers will be glad to know that, at least in this area, thanks to competition, consumers are opening up such a rich selection of watches with ingenious moon indicators, which has never been before. Many of these devices coexist in the new watches with other exotic complications. 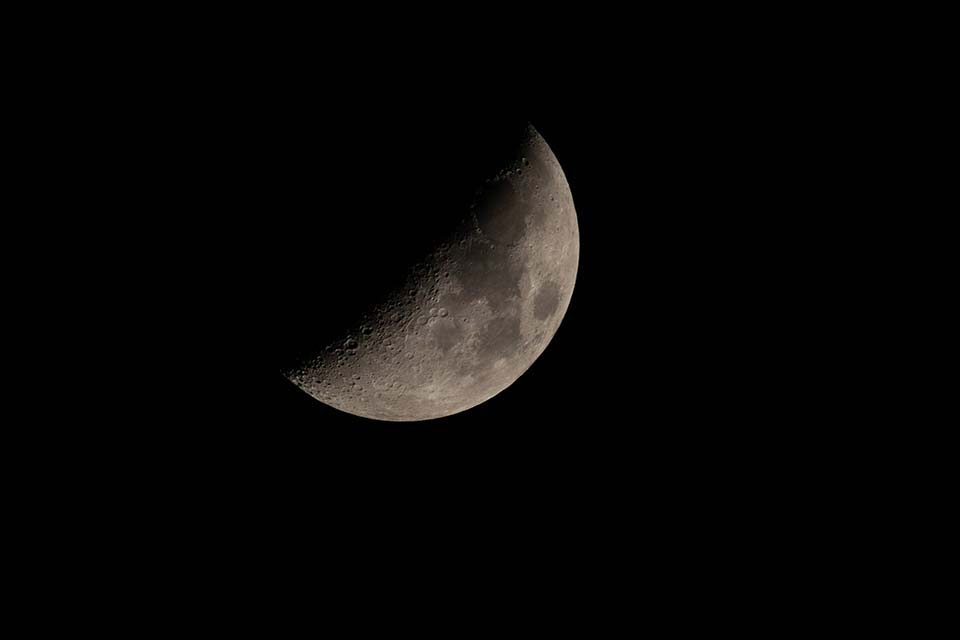 A long time ago, when people did not yet know how to depict the wanderings of the Moon across the sky with the help of mechanics, she was revered as a deity. Selene, the goddess of the moon in ancient Greece, was one of the oldest and most powerful deities. Her beauty was insidious: when the young handsome Endymion had the misfortune to catch her eye, Selena, in order to never be separated from him, plunged him into eternal sleep.

We advise you to read:  Citizen launches six watches for Star Wars fans

The moon phase indicator (in its simplest version) is not a very complicated complication: you only need to occasionally look at the sky and correct its readings. Since earthly concerns were also associated with the lunar cycle (when to celebrate Easter, when to sow peas, when to make a sacrifice to the glory of the gods), it is not surprising that the lunar pointer was the first complication, except for the usual calendar, that migrated from floor and table watches to wristwatches.

The great scientists-artists of the Renaissance sought to comprehend the movement of celestial bodies in order to discern another reality behind the ghostly earthly reality, genuine and enduring. Already in the 14th century, watchmakers like Giovanni de Dondi created watches like the Astrarium, equipped with indicators of the movement of planets, stars, the Moon and the nodes of its orbit, as well as a calendar for the year. The great astronomical clock, such as that masterpiece built in 1354 in Strasbourg Cathedral in Germany, laid the foundation for future astronomical complications, and in the 17th century the moon phase indicator began to appear on small clocks.

Thus, the English watchmaker Simon Bartram made a pendant watch in a transparent crystal case, where, along with a calendar, an indicator of the days of the week and signs of the Zodiac, there was also a lunar indicator. Abraham-Louis Breguet also showed interest in watches with this complication. Several such watches came out of his workshop, and these outstanding works have become a model for modern creators of watches with a lunar indicator. 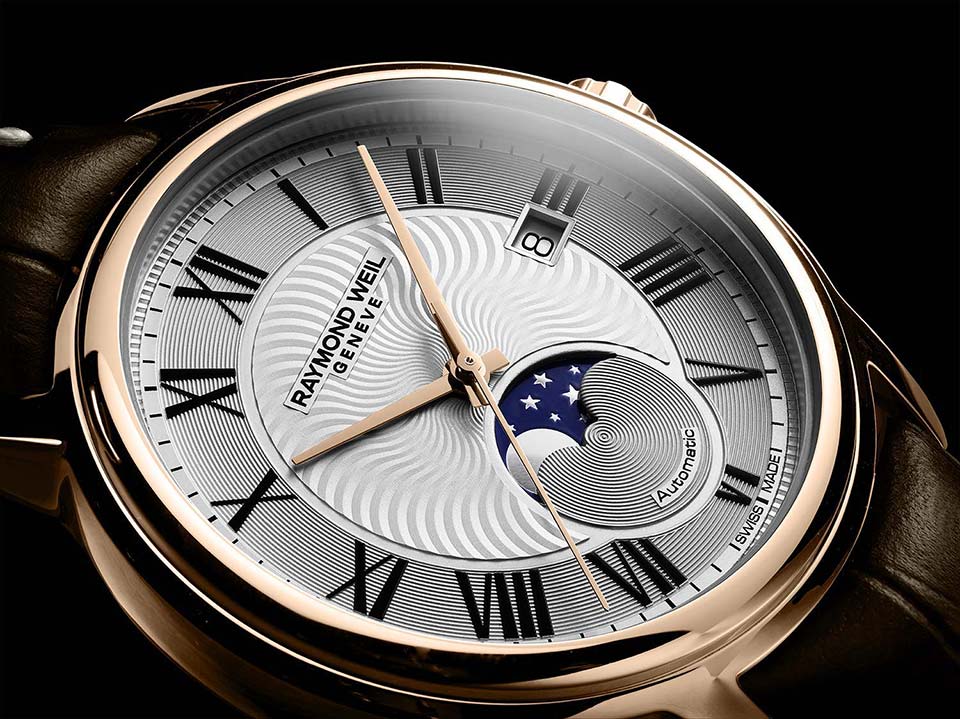 The moon phase indicator is not uncommon in men's watches, especially those that can be attributed to the "evening" or "grand weekend". The decoration of the dial with an engraving with an interesting pattern, or the stars on the disk of this simple and beautiful complication, will surely inform others about the character of the owner.

There is not a single major Swiss watch company that does not produce watches with a moon indicator. The most impressive pocket watch of this kind (impressive both externally and in terms of the number of complications) belongs to the 19th - early 20th century. Astronomical pocket watches of exceptional beauty were made not only by Jaeger-LeCoultre, Patek Philippe and Audemars Piguet, but also by lesser known manufactories, and echoes of these classic works are discernible in the products of today's masters.

After the First World War, when pocket watches began to go out of fashion, their design features began to be transferred to manual ones. The same happened with complications, including the moon phase indicator.

We advise you to read:  Precision, sophistication and bold design - the long-awaited addition to the RAYMOND WEIL Tango collection

With the end of World War II, elegance and small thickness began to be considered the main advantages of watches. Now the tone was set by classic perpetual calendars with a lunar indicator, unsurpassed in the refinement of style. Many manufactories took up the mass production of watches with a triple calendar indicator (day, month, day of the week) and a moon phase indicator. The moon indicator also began to appear on chronographs, giving a strict, practical dial a somewhat frivolous look. 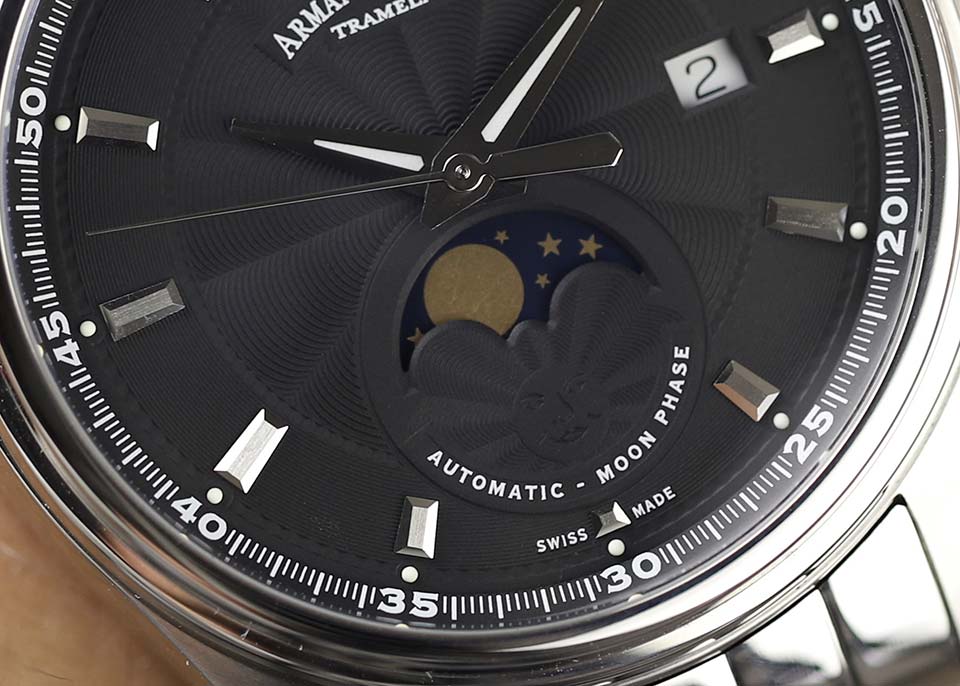 Armand Nicolet in the MH2 Moon & Date models offers a modestly sized lunar disk, but a beautifully designed "window" of this romantic complication - pay attention to the "face" of the curtain, and try to see this look on the next full moon - with a moon phase indicator you definitely won't see it miss.

In general, when a manufacturer wants to create a lunar pointer that is unlike the products of competitors, it, apart from the little things in design, chooses one of two ways: it introduces a fundamentally new way of indicating or achieves greater accuracy of readings. The main drawback of traditional lunar indicators is that, for all their undeniable retro charm, they have the same undeniable retro flaw: the outlines of the moon on them do not look like in the sky. On the pointers, the border of light and shadow on the surface of the Moon is a curve drawn once and for all, while the moon in the sky changes shape all the time, and sometimes turns into a regular semicircle.

This is due to the fact that the Moon in the sky is not a flat disk, but a spherical body. The conclusion is obvious: in order for the moon to look the same on the clock as in the sky, the pointer must be shaped like a ball. There are manufacturers that do just that.

As for the competition in accuracy, the German A. Lange 1815 Moonphase is the leader here - in terms of the accuracy of the moon phase indicator, their error does not exceed one day in 1 years. Of course, there is little joy that the readings of the lunar indicator will have to be clarified no earlier than humanity either populates the planets of the solar system, or finally destroys itself. But the moon phase indicator is not for hardened pragmatists. To enjoy the picture of how the Moon changes its shape on your wrist, you need to have at least a little bit of poetry in your soul and fantasy in your thoughts.

Wrist Watch 0 12 views
Citizen has unveiled a new line of watches based on the vintage Tsuno Chrono inspired by Star Wars. Collection

Wrist Watch 0 12 views
With the approach of summer, no matter where and how we will spend the long-awaited or

Wrist Watch 0 70 views
New materials and stepping forward technologies for metal processing on CNC machines, and at the same time