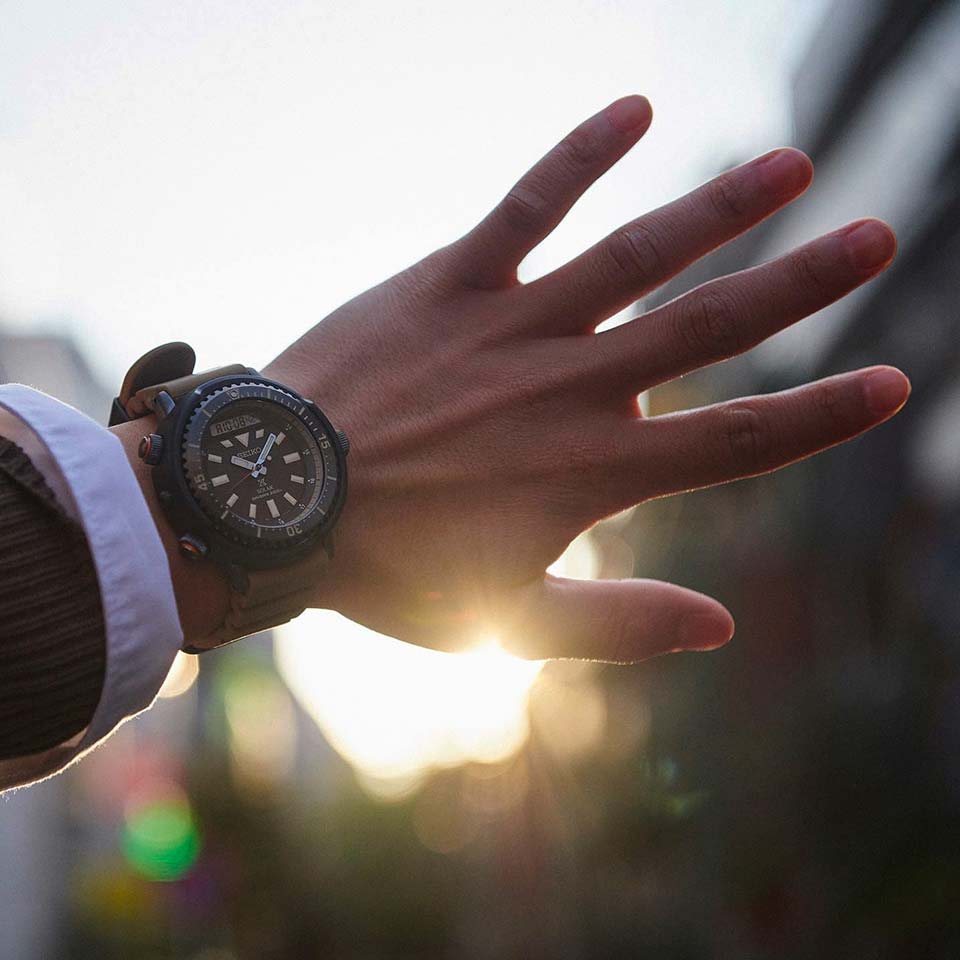 Watches in their original function, as tools for determining the time, should be replaced by mobile phones and smartphones - but this does not happen, watchmaking develops and flourishes, and all because wristwatches, in addition to their main purpose, also inform the outside world that you are a bird. But there is also a large group of people who talk about themselves and their watches, and among this category, the debate about which is better - mechanics or quartz, does not subside.

These disputes usually come down to whether the watch should be an instrument that ideally fulfills its divine chronometric purpose, or whether it is a beautiful creation of human hands, which may have some flaws - Venus de Milo, over there, stands in a museum without a head and limbs, and which value is, and how good! The truth, as usual, is somewhere in the middle, there are strong arguments in favor of one and the other, but a really good watch, regardless of the “engine”, will show the time exactly and will definitely please with the appearance.

But, in support of the former, let's say this: mechanical watches are no better than quartz ones, just the opposite. Quartz is objectively, categorically and conclusively better than mechanics. This, by the way, became known much earlier than you might think. Back in 1927, Bell Telephone Labs engineer Warren Morrison discovered that by passing a charge through a quartz crystal, a constant uniform vibration could be achieved - an observation he used to create a quartz movement, albeit the size of a room, but even then it was clear that accuracy in XNUMX times better than mechanical ones.

Imagine - for centuries you have been trying to achieve chronometric accuracy in Switzerland, improving the production of mechanisms, and then suddenly on you - some engineer from the American telephone company "jumped" you. Of course, Morrison's device could not be worn on the wrist, nevertheless it was the first chord of the watch mechanics funeral march.

Surprisingly, in general, the principle of operation of quartz and mechanical watches is not much different: both require an energy source and a regulator. While mechanical watches use a spring and an escapement to adjust, quartz watches use a battery-powered motor and a quartz crystal. Strictly speaking, the quartz movement works due to the piezoelectric effect. Deform a quartz crystal and it generates a charge.

We advise you to read:  Roamer R-Power Chrono men's watch

The reverse is also true: pass a charge through a quartz crystal and it deforms. Make this charge continuous and you'll get a wobble, a vibration that's even enough to set your watch. With the help of some electronic tricks, this signal is amplified and sent to a motor that drives the hands. Previously, quartz watches had a high frequency of oscillation, like their mechanical brothers, but this required too much energy, that is, frequent battery changes, so they decided that one cycle per second would be enough. More than.

Further, more: a compact processor that can be easily placed in a watch case opens up endless possibilities for you. Do you want a day of the week, a date, a perpetual calendar? You are welcome. Is the display analog or digital? Jumping hour? No problem. Countdown 1/100 or 1/1000 of a second? Easily. The cost of such complications? Pennies…

Let's continue the comparisons. Battery powered quartz is a small container containing a liquid electrolyte sandwiched between two metals, an anode and a cathode. It is a chemical reaction that causes electricity to discharge, an invisible process. In mechanics, a thin strip of metal twisted into a spiral (window spring) about 50 cm long, usually hidden in a winding barrel, is used as an energy source. In rare cases, the work of the spring can be observed, but what is interesting about this?

Curious readers know for sure that the production of quartz watches began in the 1970s, but the first commercial model (Quartz Astron 35SQ) was released by the Japanese Seiko in 1969. Although Japan was ahead of its Swiss counterparts, but soon appeared on the market Patek Philippe, Rolex and Audemars Piguet, which used Swiss-made quartz movements. As you can guess, the first models of quartz watches were expensive (for the Seiko Quartz Astron, they say, they asked for a car), but the technology developed, the consumer appreciated it, and off we go ...

The mass production of inexpensive quartz watches flooded the world, which practically buried the Swiss watch industry, but this story is another time. Let's note a funny fact. In the same year, 1969, Seiko, ahead of a number of Swiss companies, released its own automatic chronograph movement - as before, and now the company is one of the most advanced in two worlds - quartz and mechanical. It's time to see what Seiko has in store today, we're only looking at quartz - quartz is better, haven't we convinced you?

We advise you to read:  Must-have of the week: medallions and pendants on chains - favorite jewelry of stars 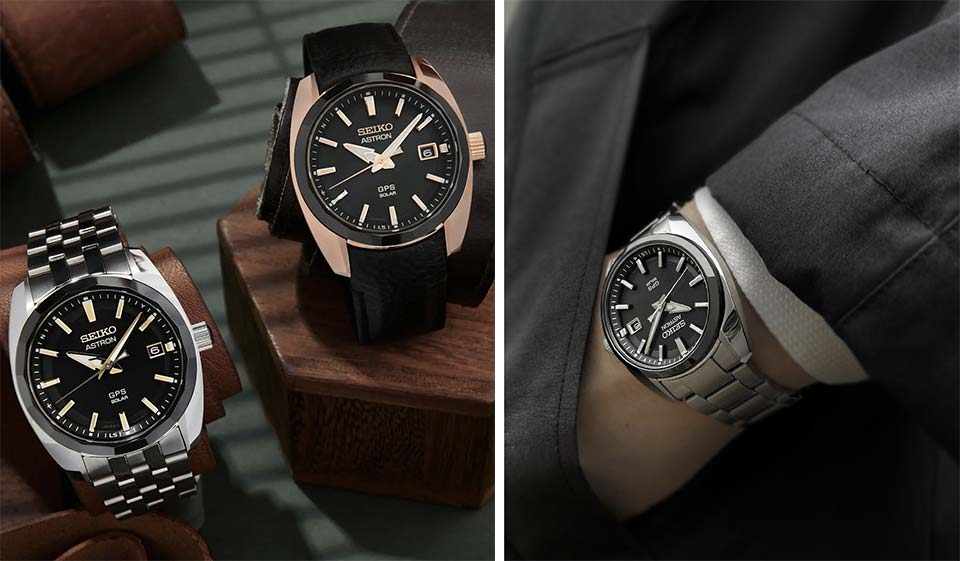 Let's start ab ovo with the Astron collection. While most current Astron models bear little resemblance to the 1969 model, in 2019 the brand celebrated its 50th anniversary with a nearly 100% replica that featured the latest in GPS technology and solar battery charging. If you manage to find this replica, rejoice, you will not get closer to the original of 1969: unlike later quartz releases, the Seiko Quartz Astron 35SQ were not mass-produced and were not cheap, but like any rare thing, 35SQs are probably still worth expensive, and hidden in the chests of collectors.

But don't fret - if you like the shape of the Quartz Astron 35SQ, check out the Seiko SSJ012J1. Accuracy +/-1 sec in 100 years, taking into account automatic satellite correction of the exact time, or +/-000 sec. /month without using GPS. Of the useful functions - date, perpetual calendar, mode "In flight", overcharge prevention, power saving mode. 15mm case, PVD titanium, ceramic bezel, water resistant up to 39m. 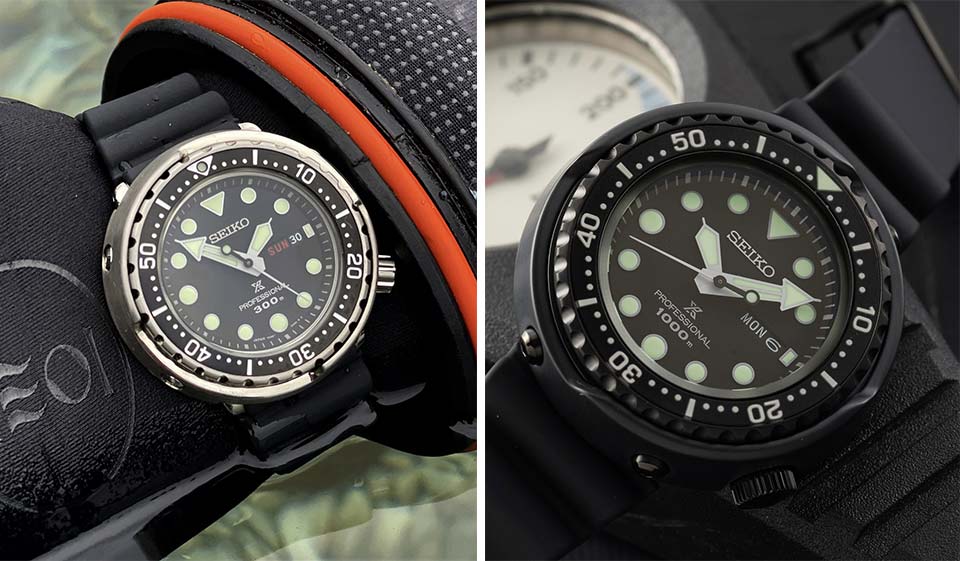 About Seiko Prospex you can talk endlessly. There are dozens of iconic models in this collection that fans go crazy for themselves and drive those who can't figure out what's so special about them crazy. For example, I will tell you about one such “episode”.

Three years ago, Seiko released the Prospex 1970 Diver's Re-Creation Limited Edition SLA033, a modern take on the famous 6105, popularly known as "Willard" - the 6105 was worn by Captain Willard (actor Martin Sheen) in Coppola's famous film Apocalypse Now. The original 6105 came in two versions - one in the 8000/8009 case and the larger one in the 8110/8119 case - which is what was featured in the film. The large asymmetric case, which completely protects the large crown - it is at the 4 o'clock position, water resistant to 150 m - all this was liked by buyers 50 years ago (6105 was produced from 1968 to 1977), buyers like it very much today.

We advise you to read:  What do the inscriptions on the watch mean?

The reincarnation of the 6105 was well thought out, used modern materials, equipped with a modern mechanism, improved water resistance to 200 m. True, the number of Prospex 1970 Diver's Re-Creation Limited Edition SLA033 was limited to 2500 copies, so these probably cannot be found - and again, no need get upset, look what's in the Prospex line: Seiko S23631J1! In front of you is “tuna”, as this line of watches was nicknamed for its massive, tin-can-like case, and this is a living legend.

S23631J1 is a reissue of the 1975 model, but it is an improved, modern version with high technical characteristics: water resistance up to 1000 m, titanium case, innovative corrosion-resistant Ever-Brilliant Steel bezel, information is easily read from the dial thanks to large hands and round hour markers coated with LumiBrite. The watch is large, 49,4 mm in diameter, case height - 16,3 mm, weight - 119 g. To be honest, the size is not for everyone, but whoever dares will not regret it. 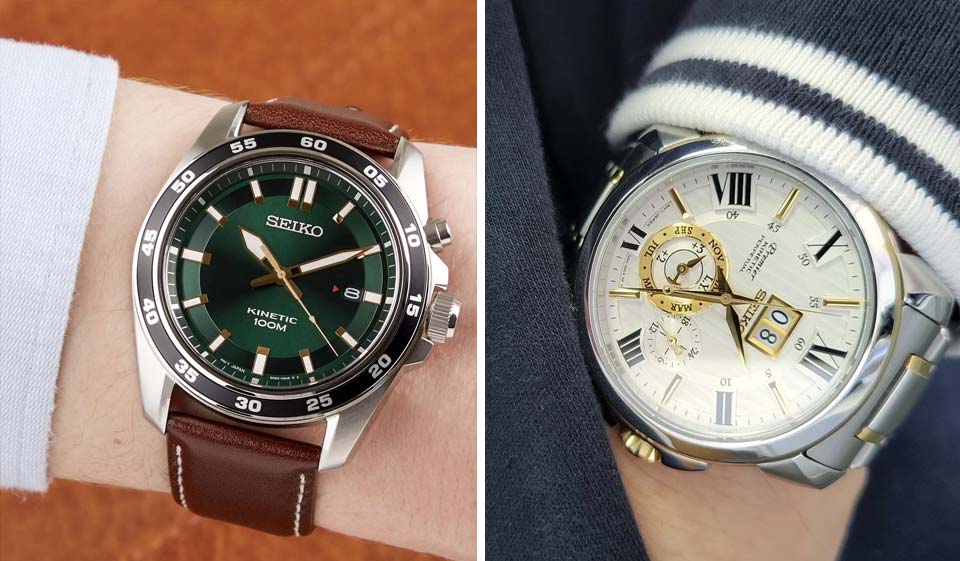 If we are talking about Seiko, then we cannot fail to mention the watches with the Seiko Kinetic automatic generator system. Kinetic watches are equipped with an internal electrical generator controlled by the kinetic movement of the wearer's wrist. The electricity generated is stored in a rechargeable battery, which needs to be replaced less frequently than a conventional quartz watch battery. In the company itself, the system is considered a platform on which various Seiko mechanisms are built. Each of which is designed to meet the unique requirements of users. This means that Kinetic is not allocated to any separate collection, but mechanisms that use kinetic energy to recharge the battery are found in different watches of the brand.

From inexpensive ones, pay attention to the SRN045P2 model in the CS Dress collection. Classic, with a classic-looking complication - a retrograde indicator of the days of the week - this watch will definitely speak positively about you, and if you carefully read this material, you yourself will be able to keep up the conversation and tell others something new and interesting.

Wrist Watch 0 62 views
Citizen has unveiled a new line of watches based on the vintage Tsuno Chrono inspired by Star Wars. Collection

Wrist Watch 0 49 views
With the approach of summer, no matter where and how we will spend the long-awaited or

Wrist Watch 0 68 views
G-Shock has unveiled a new collection inspired by Chinese porcelain. A characteristic azure pattern is used in the design of four