Luminox was founded in 1989. For 25 years of its existence, which is considered an extremely short period in the watch industry, Luminox has managed to earn the respect of people whose work is associated with risk (including for life). Moreover, Luminox has established itself in that part of the world's watchmaking industry that does not forgive mistakes at all - the production of watches intended for members of the military and police units, racers, divers.

Interestingly, for the first two years of its conscious life, Luminox wanted to produce watches exclusively for athletes, but only the curiosity of people from completely different industries at the watch exhibition in 1993 changed literally everything. Many years have passed since then, and Luminox, founded in the USA and producing its watches in Switzerland, has fulfilled large-scale orders for the American police and the Air Force, Navy special forces (they are “fur seals”), pilots of racing cars. 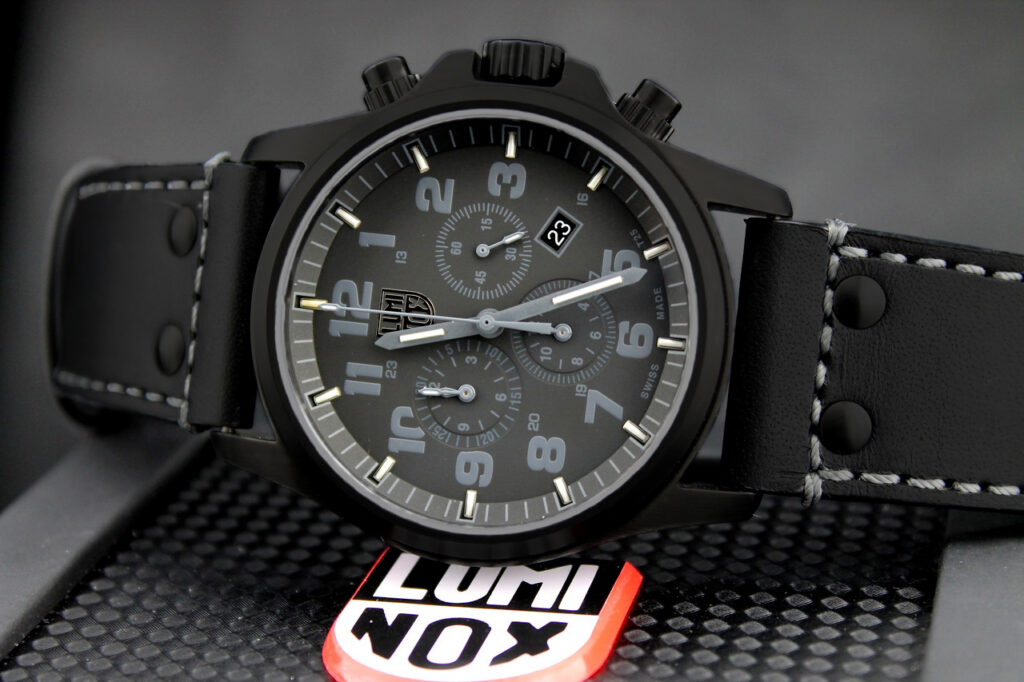 Today we will introduce you to the Atacama Field Chronograph Alarm 1940 Series, A.1941.BO, produced by the aforementioned company Luminox. With the proven RONDA 5130.D movement as its heart, this chronograph quartz watch is part of the Luminox family of so-called “earthly” watches. The company also presents the families "Water", "Air", "Cosmos" for all those brave men who, on duty, are obliged to be in water or under water, in the cockpit in the air, or in general in space. In fairness, we note that “Cosmos” means the creation of Luminox watches in cooperation with one American company in 2015, which starts regular flights of “space tourists”. 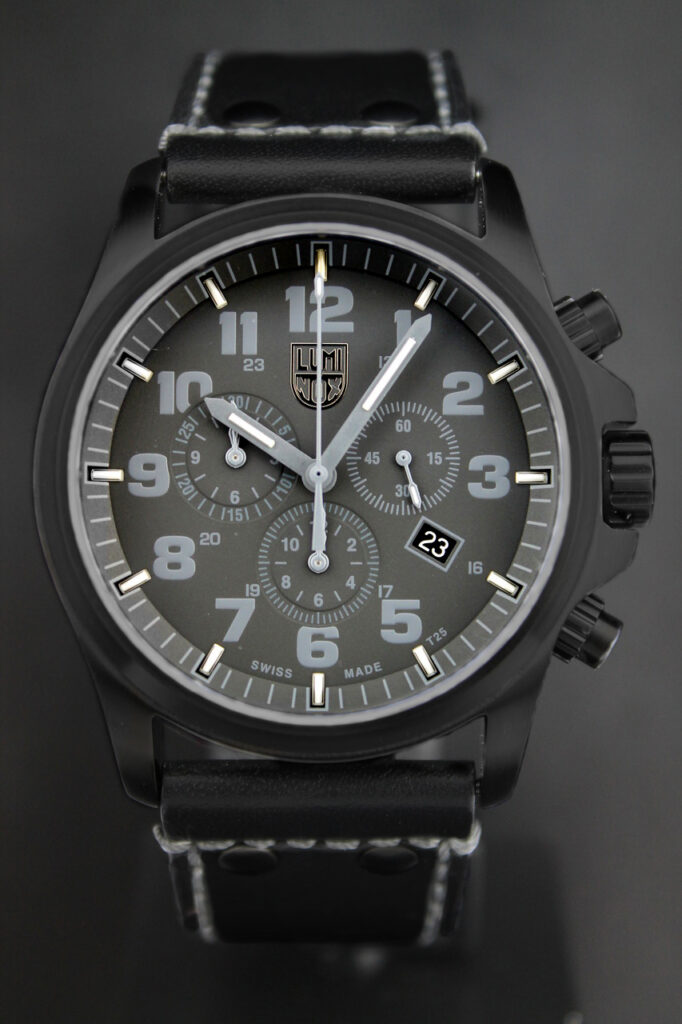 The Luminox A.1941.BO imbues the hand with confidence as soon as the leather wrist strap is fastened. And nothing will happen to these watches with a chronograph, if their owner suddenly accidentally “tests them for strength”.

We advise you to read:  What is the difference between NATO and ZULU straps 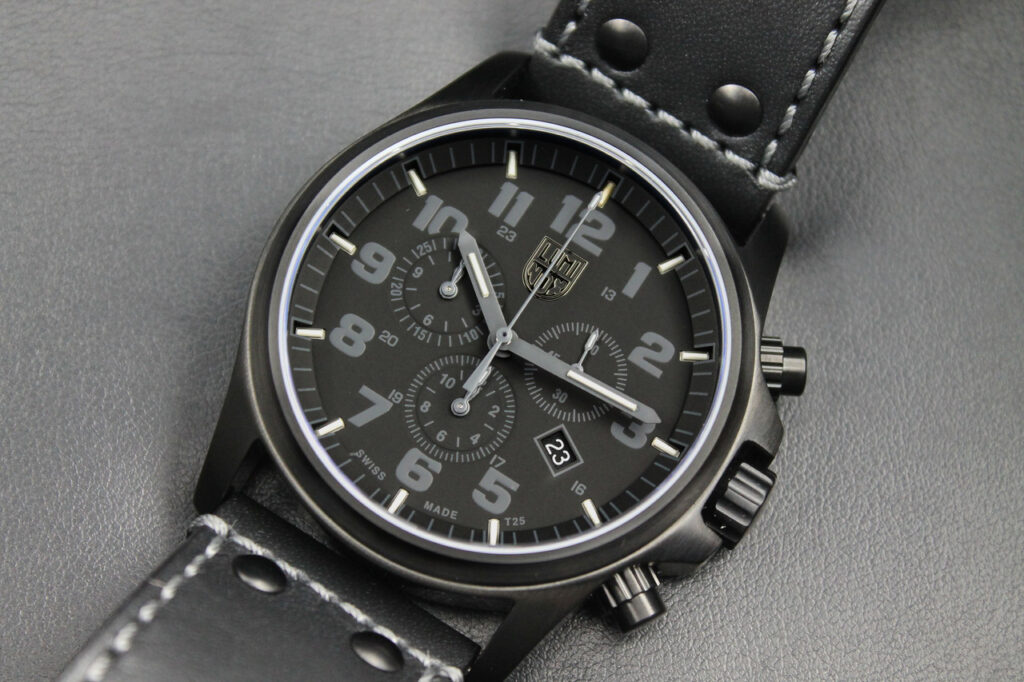 Atacama Field Chronograph Alarm 1940 Series are made of steel with PVD coating.

Alarm clock, stopwatch and calendar will allow you to always and everywhere appear on time and do dives (free-diving - diving without scuba gear), verified to the second in a waterproof watch with a water resistance of up to 100 meters. A high-quality chronograph will measure time periods without errors. 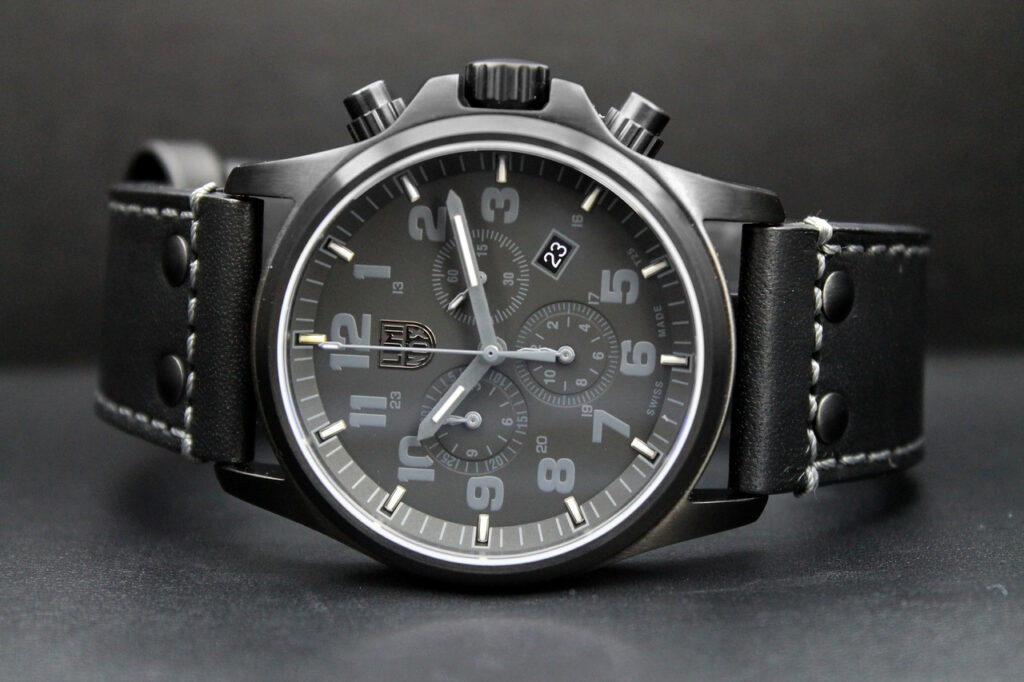 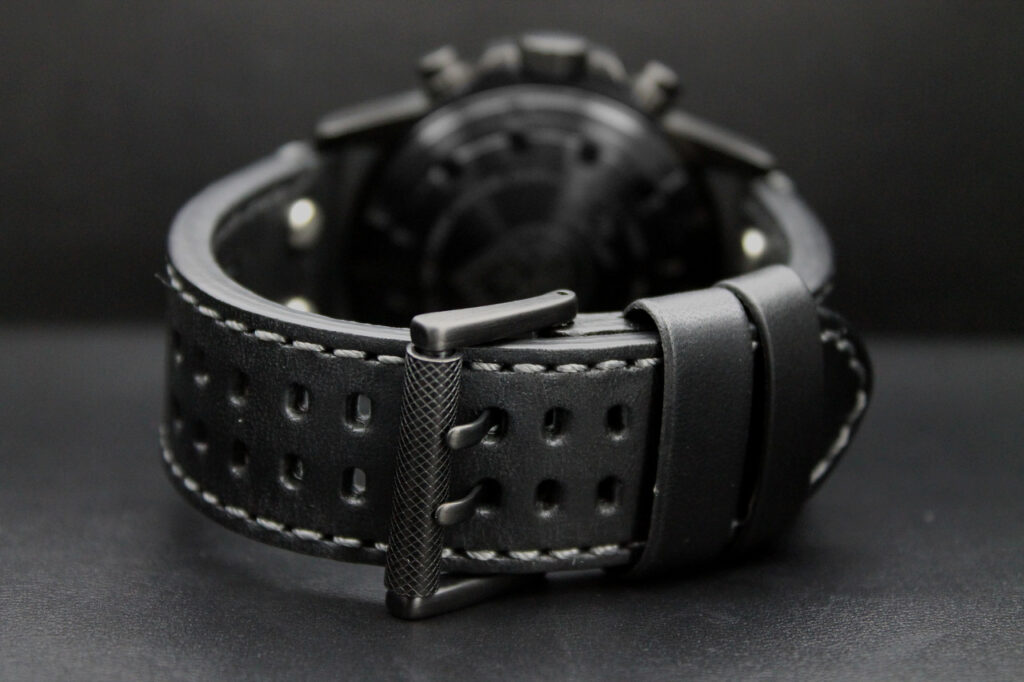 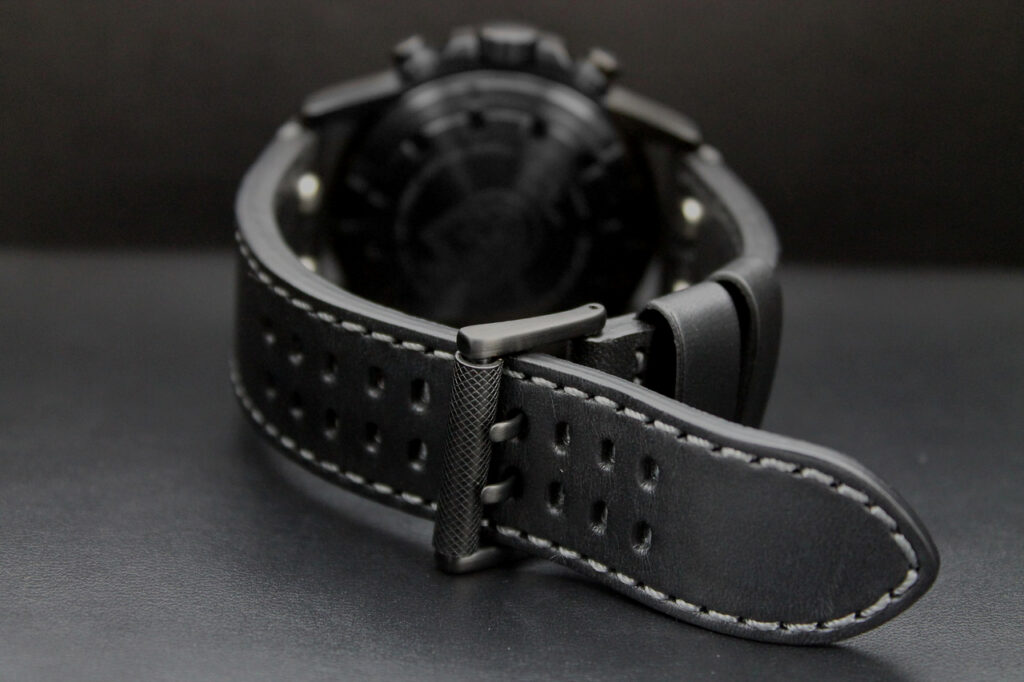 The black watch case has a diameter of 45 mm. The strap is made of genuine leather. Lighter stitching gives the model notes of drive. Double holes and a classic clasp securely fix the watch on the wrist. The black dial is covered with a durable sapphire crystal with anti-reflective coating. The numbers and hands of the dial are not just good, but perfectly readable. And in any, even the worst lighting conditions. Even in total darkness! And here we come to the main feature of the Luminox company, which allowed it to make such a dizzying rise in such a small number of years. 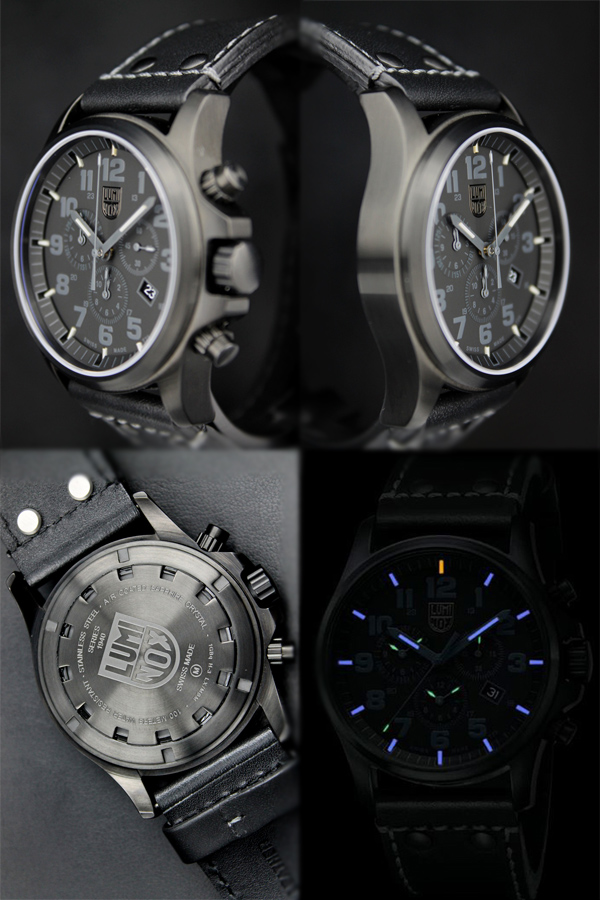 The name "Luminox" itself was formed by merging two words from Latin - "Lumi" (Light) and "nox" (darkness). In that very 1989, Barry Cohen, having already had his fill of “middle-level” positions in many American representative offices of European watch houses, decided to open his own business. The “zest” for the newly minted company was prepared in advance - Barry Cohen had been nurturing in his head for a couple of years the idea of ​​​​creating a watch that would simply not need a “push-button” backlight. 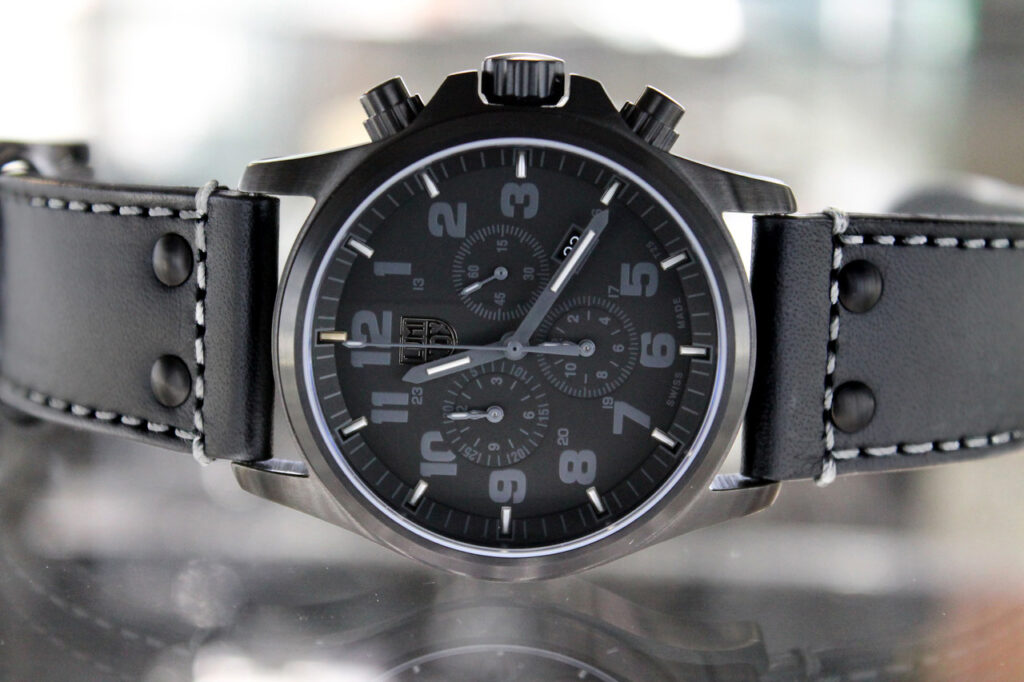 Imagine a dial that will glow for 25 years in a row without stopping, for this you do not need to press any buttons, there is not even a backlight “bulb” on the dial! How is this possible? By using a substance called tritium. People who carefully read the article about this substance know that tritium is not dangerous to humans, although it is a radioactive substance. A person will be able to cause minor harm to himself only by inhaling or somehow eating tritium.

We advise you to read:  Casio recreates iconic F100 from the seventies

But for this you need to manage to break the durable sapphire glass of the watch, and then violate the integrity of the tritium containers built into the hands and numbers of the dial, which is not possible. Tanks with tritium are sealed with a special laser, leakage is excluded. Thus, all the dials of Luminox watches, from the very first model to the current ones, required additional and painstaking work - the production of one Luminox dial takes more time than the creation of dials from other companies.

The young innovators of Luminox have made a revolution! It is thanks to them tritium backlight in modern Swiss watches is becoming more and more in demand. 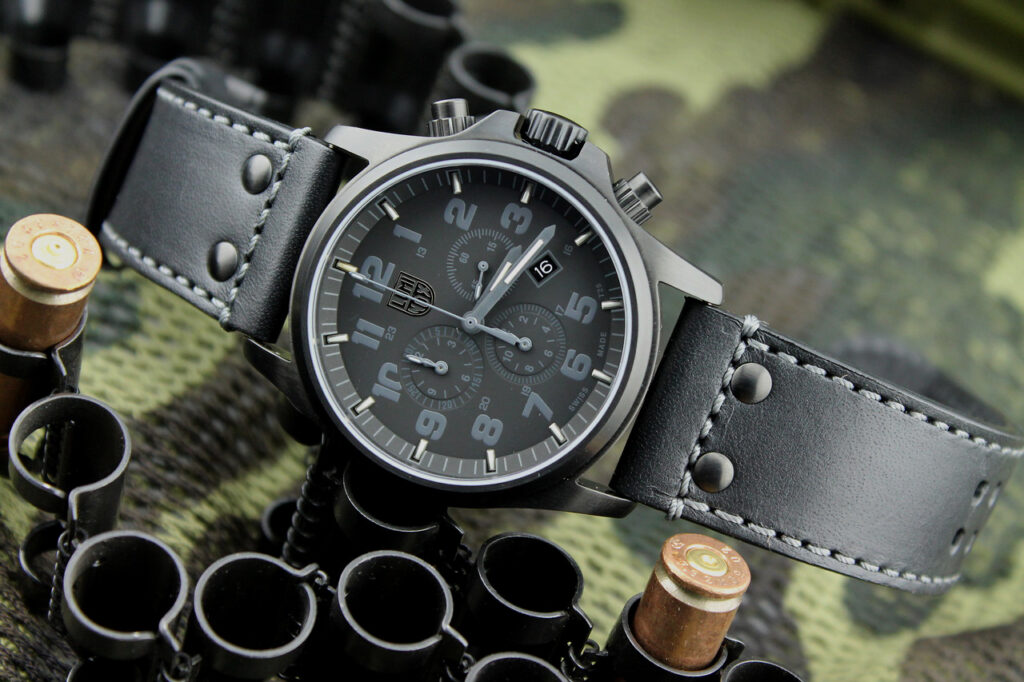 The history of Luminox in general and the history of the Atacama Field Chronograph Alarm 1940 Series in particular are inextricably linked with the number 2. Two words from Latin merged and became the name of the new company, light and darkness managed to get along with each other, black became an ally of white, and vice versa. And it all started on one of the days that seemed to be yesterday in 1989, when the American Barry Cohen, striving for the realization of his idea, asked his old friend Richard Timbo to become his partner. Business offers from old friends cannot be turned down, so the decision was immediately made to open the Richard Barry Marketing Group, which became the owner of the new Luminox company. 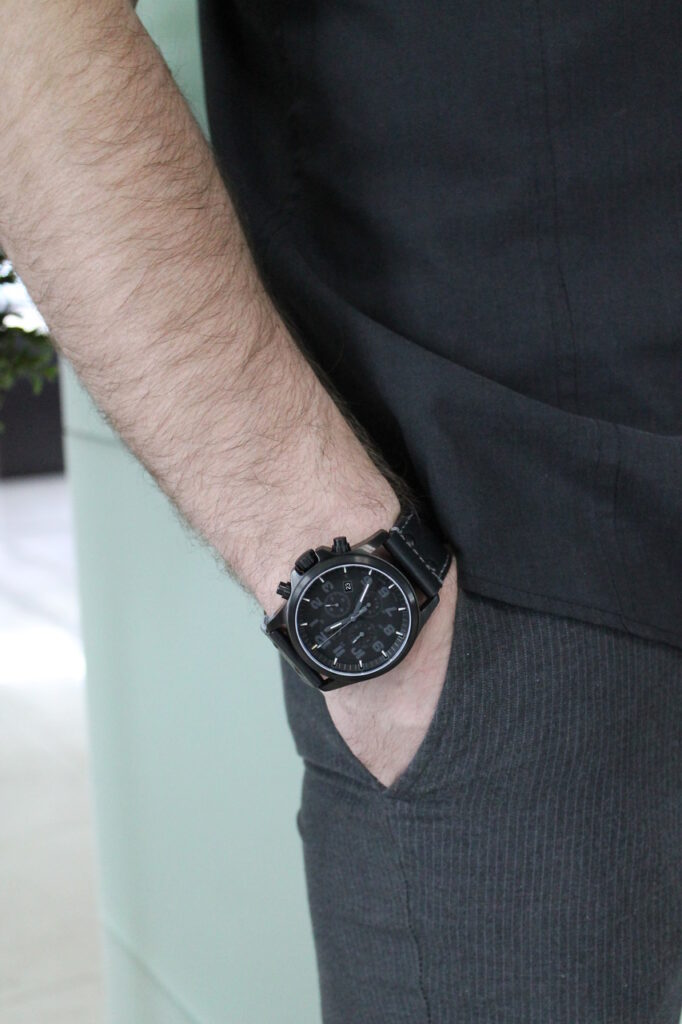 Two words from Latin. The two extremes are light and shadow. Two people.

A watch for those who need to clearly divide everything in the world into black and white, good and bad. Right and wrong.

Watches for true realists. For those who have decided what they want in life. We advise you to read:  TAG Heuer Autavia watch review
Wrist Watch Source
You may also be interested.

Wrist Watch 0 98 views
Delma has expanded the Cayman collection, which was first introduced in 2019, with new Cayman Bronze models with

Wrist Watch 0 53 views
What is a "hit"? This is the kind of product that sells best, right in great demand. It's like this

Wrist Watch 0 68 views
Fossil have released a limited edition of watches and accessories created in collaboration with the author, designer and

Wrist Watch 0 73 views
As you know, there is no sea in Switzerland. But it's no secret that the world's best watch