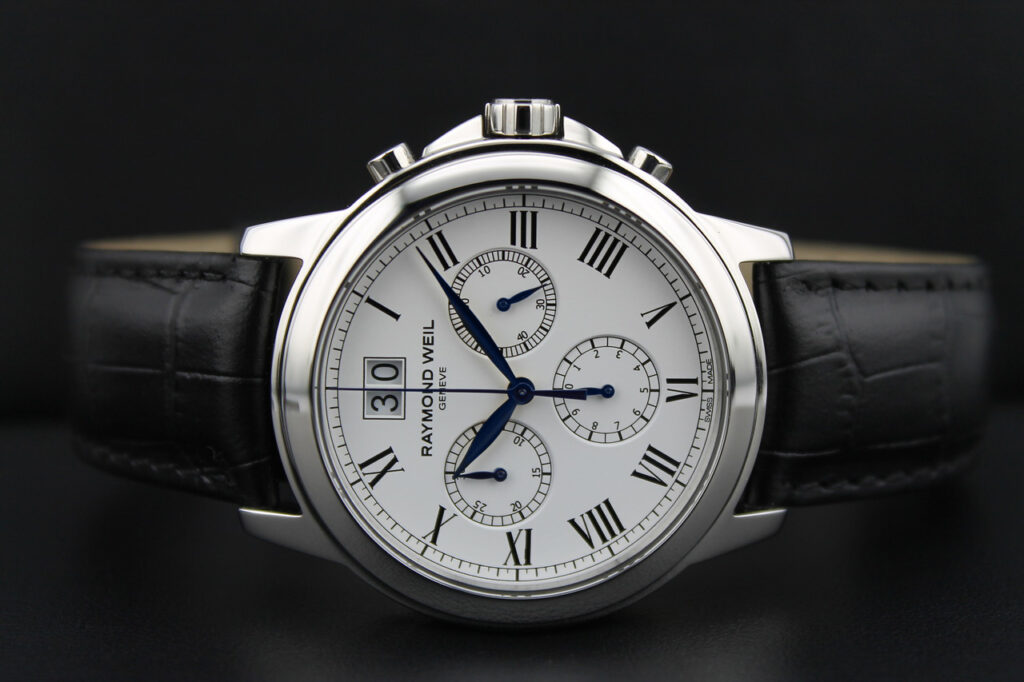 “Ever since Beaumarchais invented the anchor clock before writing comedies and making money, the Swiss know a lot about these products.” Mikhail Veller

A lot can be done with a Raymond Weil men's watch. But what can not be done is to confuse them with others. Both on the crown and on the back of the case there is a brand mark:

. And a random person will not become the owner of such a watch. Swiss watches are not just an expensive thing, they are a signal to others. For example, Raymond Weil carries the following message: "I am an educated, modern person, a lover of classical designs, but I am also fond of contemporary art." In general, a successful intellectual of the 21st century. That's all the clock will say. By the way, the language of watches is much more precise and definite than the once popular “language of flowers”. Raymond Weil on hand is a calling card.

Raymond Weil is a young Swiss brand producing elegant classic watches. The company was founded in 1976 during a crisis - this is what all the most intelligent people do: a crisis is a point after which only a rise is possible, and it is possible to enter such a conservative business as watchmaking, and even Swiss, but only using the energy of an uptrend . The first major collection was named Amadeus, after the film by Milos Forman. Then followed Othello, Traviata, Parsifal, Nabucco, Don Giovanni - just the repertoire of the opera house! By the way, Don Giovanni is not the head of the Don Giovanni mafia family, but the name of the opera Don Giovanni.

In July last year, Raymond Weil became the official watch partner of London's Albert Hall and partnered with Wired, London's live music platform to discover new names in music. However, Raymond Weil watches are quite appropriate on the hand of an athlete, an aviator - the president of this company, in addition to being a passionate music lover, is also fond of piloting a sports aircraft.

We advise you to read:  Test Review - What Watch Are You? 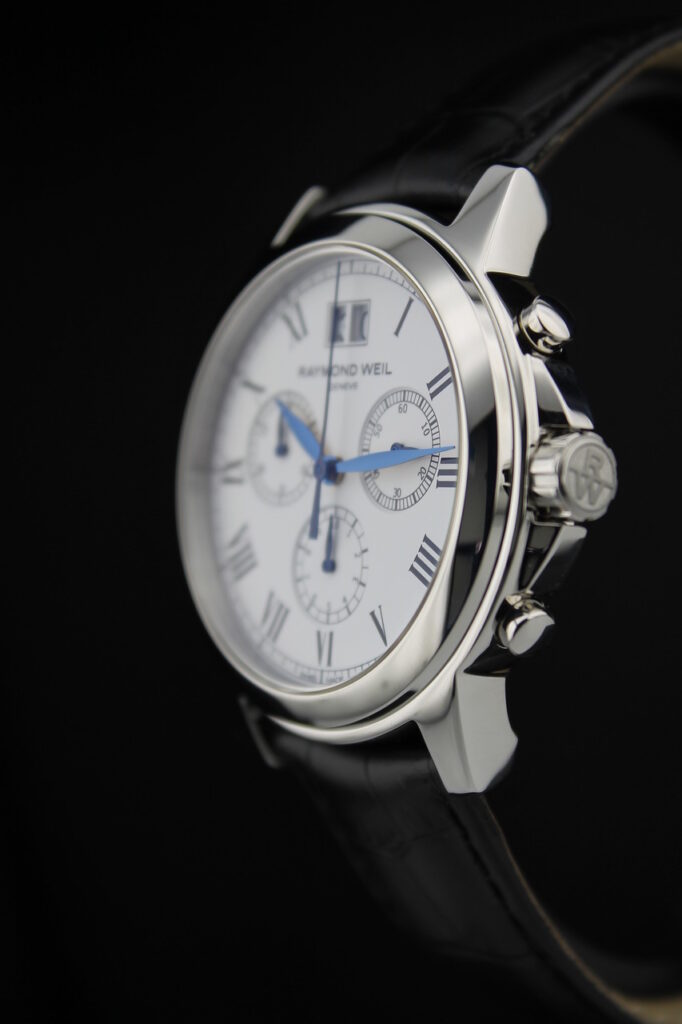 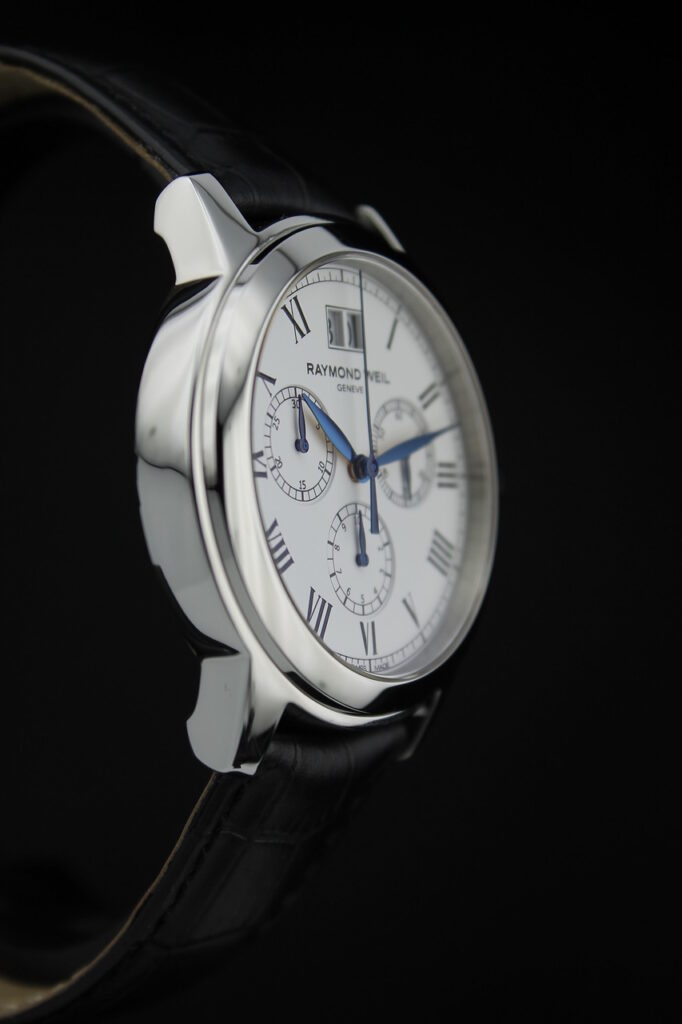 The look of the Raymond Weil chronograph watch from the Tradition collection, 4476-STC-00300, is a fine Swiss classic. It is immediately clear - a chronograph with a stopwatch, a big date. The size of the case by male standards is quite elegant - diameter 39mm, thickness 9,25mm. The case is made of steel, white dial with strict Roman numerals. 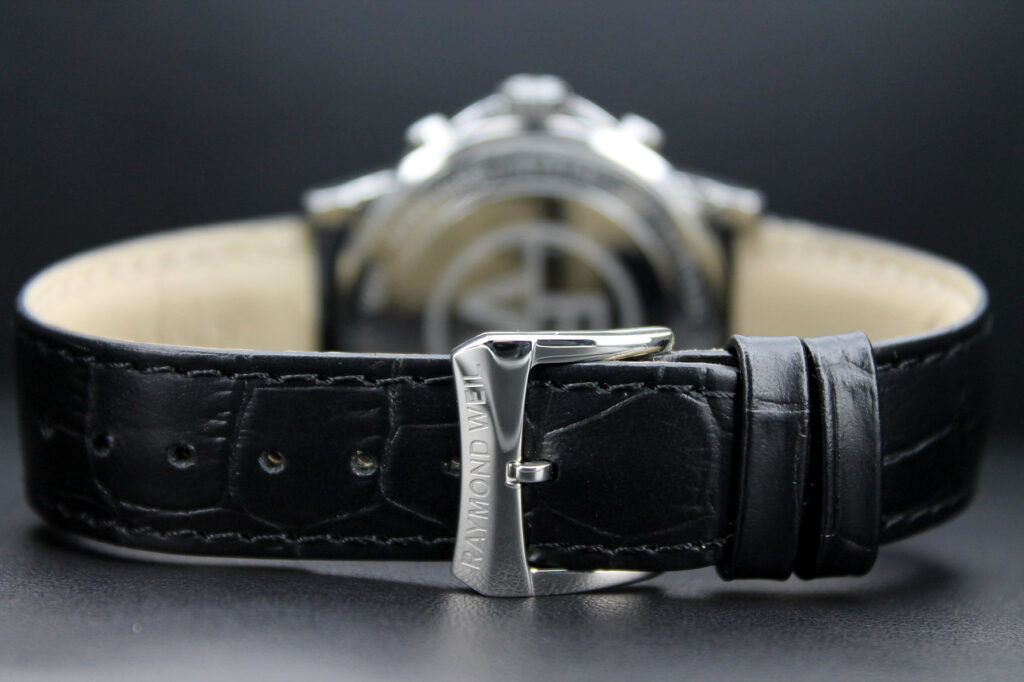 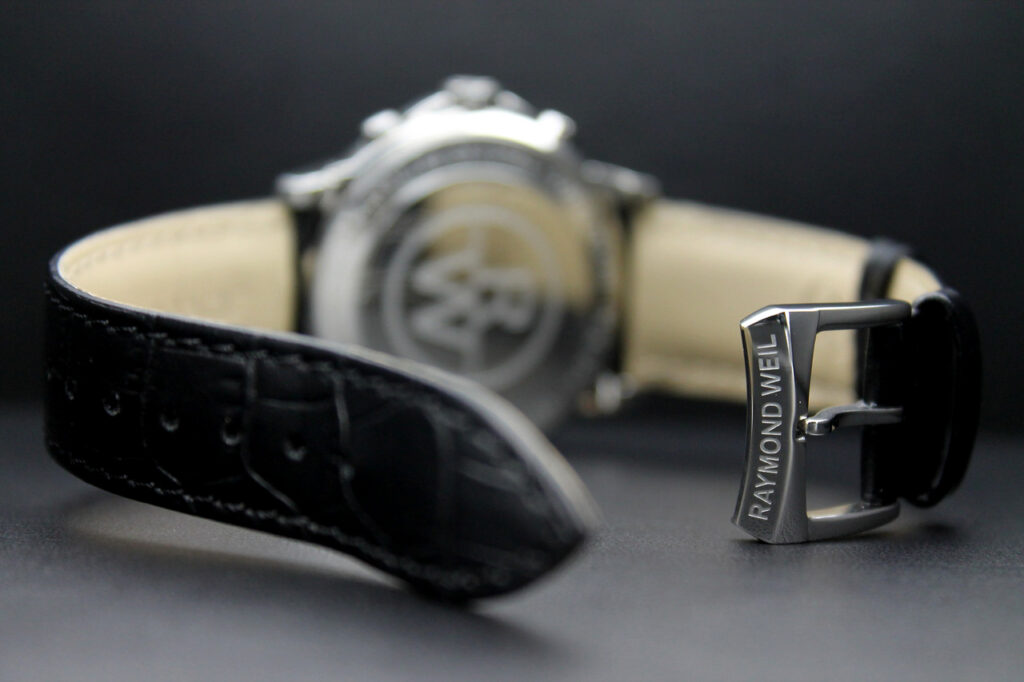 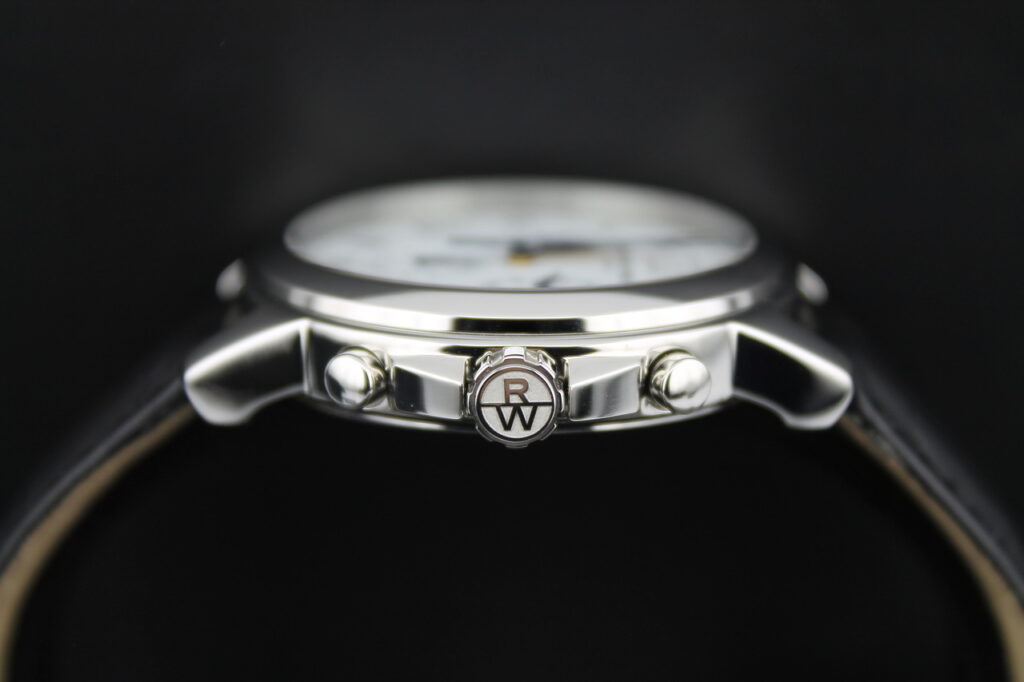 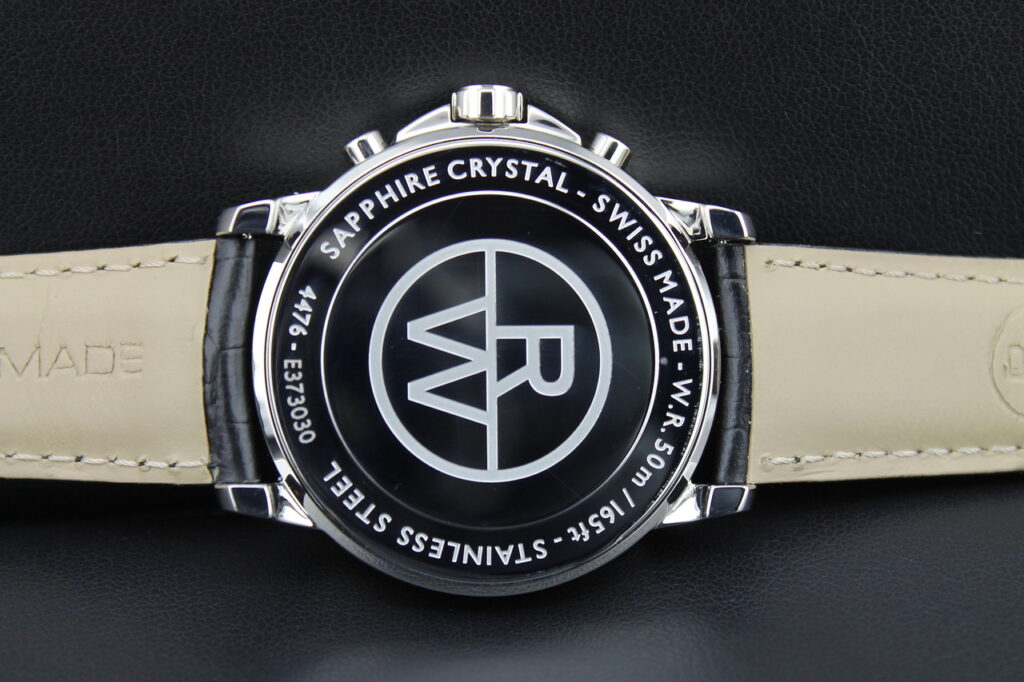 Crocodile-effect leather strap with stitching. By the way, the stigma of the company is even on the classic clasp. Appropriate initials

There is also on the crown, and on the dial - the inscriptions Raymond Weil and Geneve. On the back cover there is very nice information: the level of water protection is up to 50 meters. Saphire crystal - sapphire glass. And of course, the inscription that inspires respect is Swiss Made. 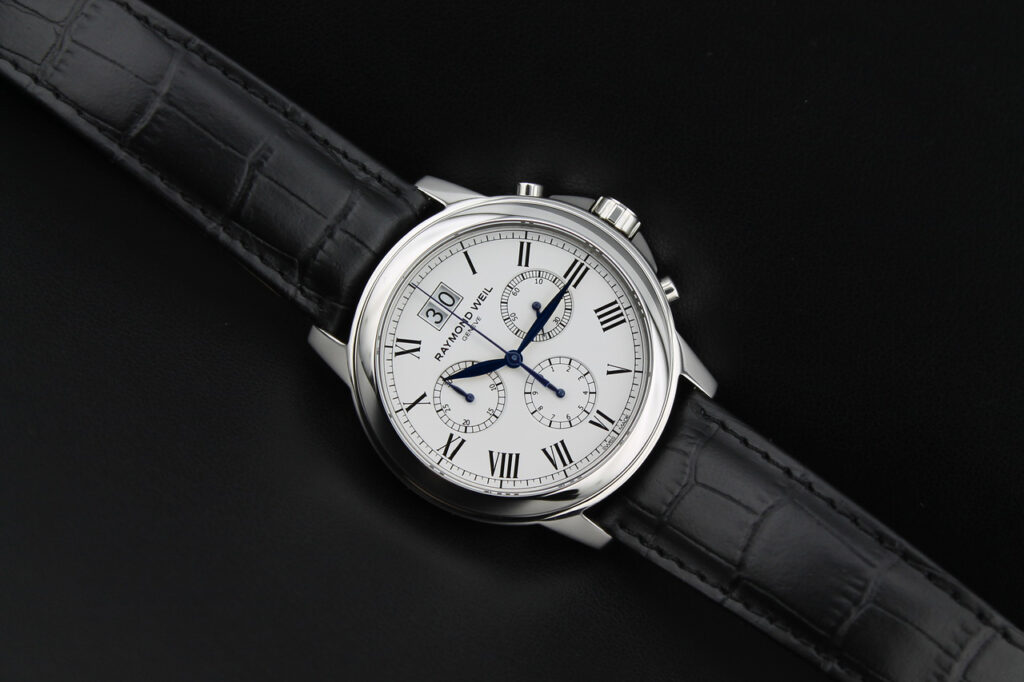 Did you look at this model from the outside and it seemed to you that you know them from the inside? This is a great quartz watch. Chronograph. Leather, steel, sapphire crystal, hands, numbers, and Raymond Weil - everything is worthy of respect! 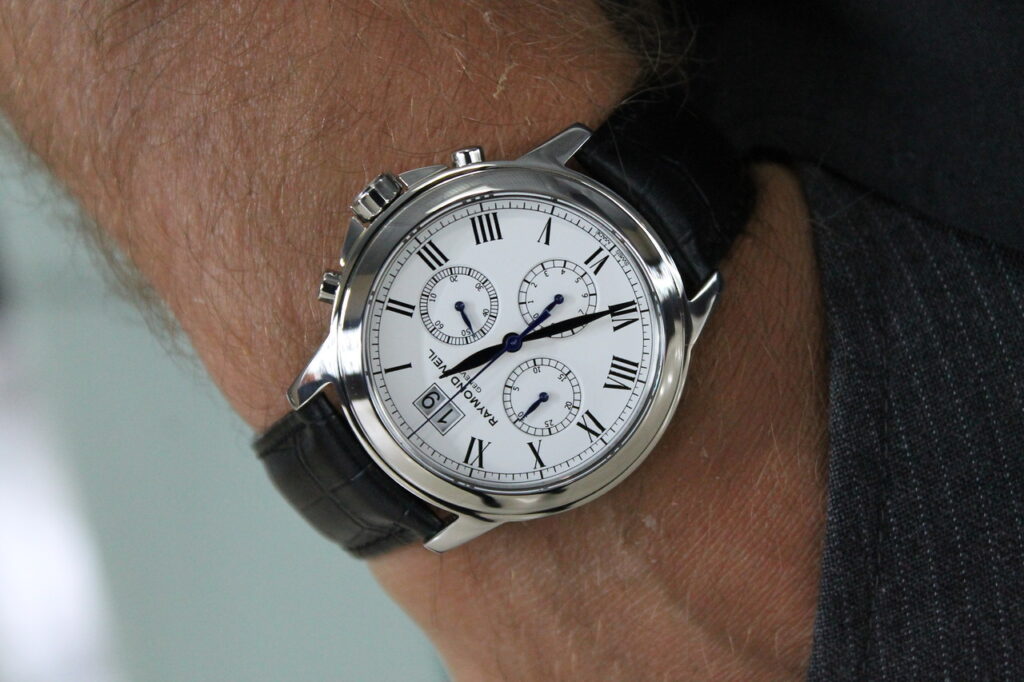 You have a Swiss watch on your hand. It can be a watch of a businessman (very even!), a racing driver or a pilot (why not?), a general (they go well with a military uniform, especially with a dress one). Swiss magic! By the way, which is important, the watch has a very attractive price. And, having seen such a watch on your hand, an attentive connoisseur will say: “And he is not just a wealthy person, he understands watches, and knows the value of money.” Excellent business card!

"Precision is my inspiration." Raymond Weil