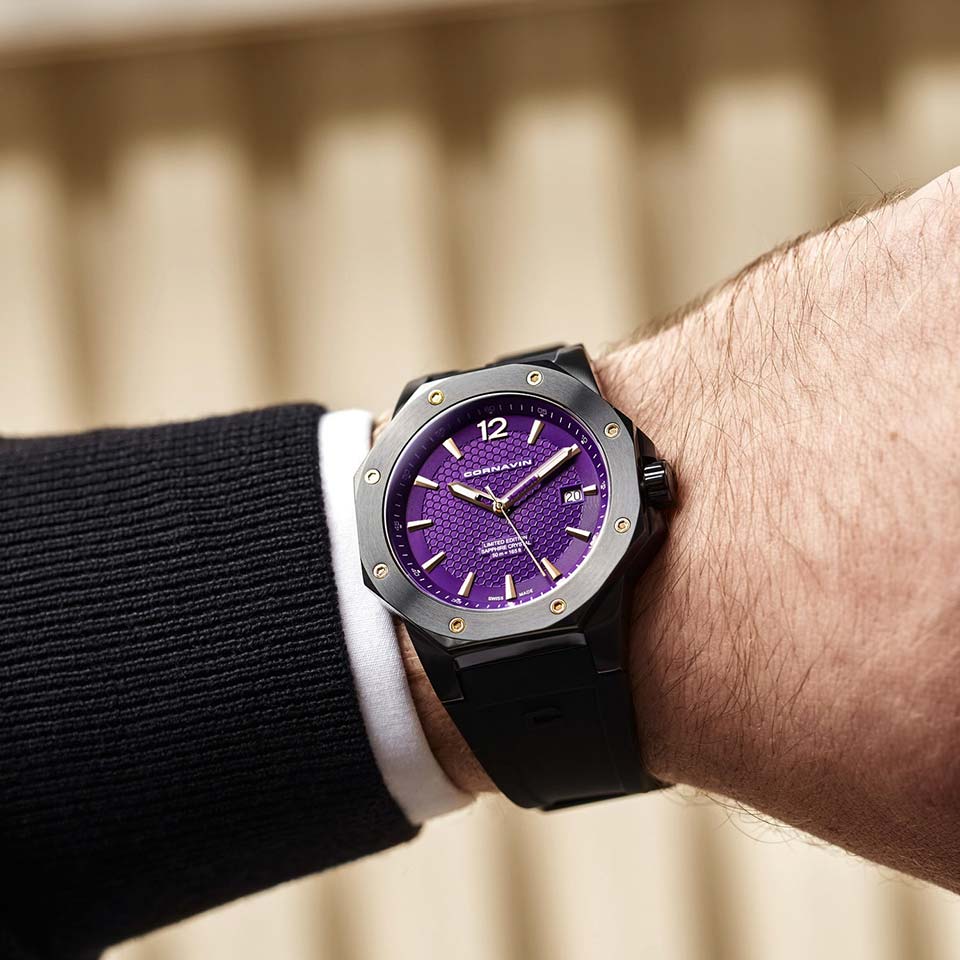 The Swiss watch company Cornavin has added three new colorful models to its Downtown 3-H collection. It is worth recalling that all Downtown by Cornavin are dedicated to the historic center of Geneva: everyone who has visited the capital of world watchmaking knows the Cornavan train station, Place Cornavin, Rue Cornavin, a hotel with the same name ... means "three hands" (3 Hands) and distinguishes it from other brand watches - the Cornavin Downtown chronographs.

The novelties, like all the other three Cornavin Downtown 3-H hands, are powered by the Swiss quartz Ronda 515 movement. The date aperture is placed at 3 o'clock. Pointed hands are covered with Super-LumiNova and are partially skeletonized; the date window is located at the 3 o'clock position. The case is made of stainless steel 316L, its diameter is 41 mm, water resistance is 50 m. The dial is covered with a sapphire crystal. The fluted crown is well protected, the case back is screwed down.

One of the most notable features of the Downtown 3-H is the octagonal bezel with screws at the vertices of the octagon. This evokes pleasant associations with the legendary Audemars Piguet Royal Oak watch. They are also hinted at (but categorically without any plagiarism) by the composition of the dial, decorated with a honeycomb structure.

The first of the new models features a blue dial and a robust steel bracelet with a folding clasp.

The second one is offered almost entirely in black - this is the PVD-coating of the case and the rubber strap with an Ardillon buckle (one of the variants of the classic pin buckle). Against this black background, the color of rose gold shines attractively - it is filled with the bezel screws, hands and hour markers.

Finally, in the third version, a silvery shining steel, which is set off again by a black rubber strap with an Ardillon buckle, one cannot ignore the rarely seen dial color: it is purple.

We advise you to read:  Summer Hublot - dedication to Ibiza, Capri and Saint-Tropez

All these three novelties of the distinctive urbanistic Cornavin Downtown 3-Н watches are released in a limited edition - 999 pieces each.

Wrist Watch
Seiko watches are the whole world! Excellent, reliable and precise mechanics; one of the first

Wrist Watch
Ferragamo has unveiled a new version of its best-selling F-80 model, encasing it in

Wrist Watch
Imagine that you live in the early 19th century and are planning to travel from Beijing.
Add a comment Отменить ответ
We use cookies on our website to give you the most relevant experience by remembering your preferences and repeat visits. By clicking "Accept", you consent to the use of ALL the cookies.
Don't sell my personal information.
Cookie SettingsAccept
Manage consents