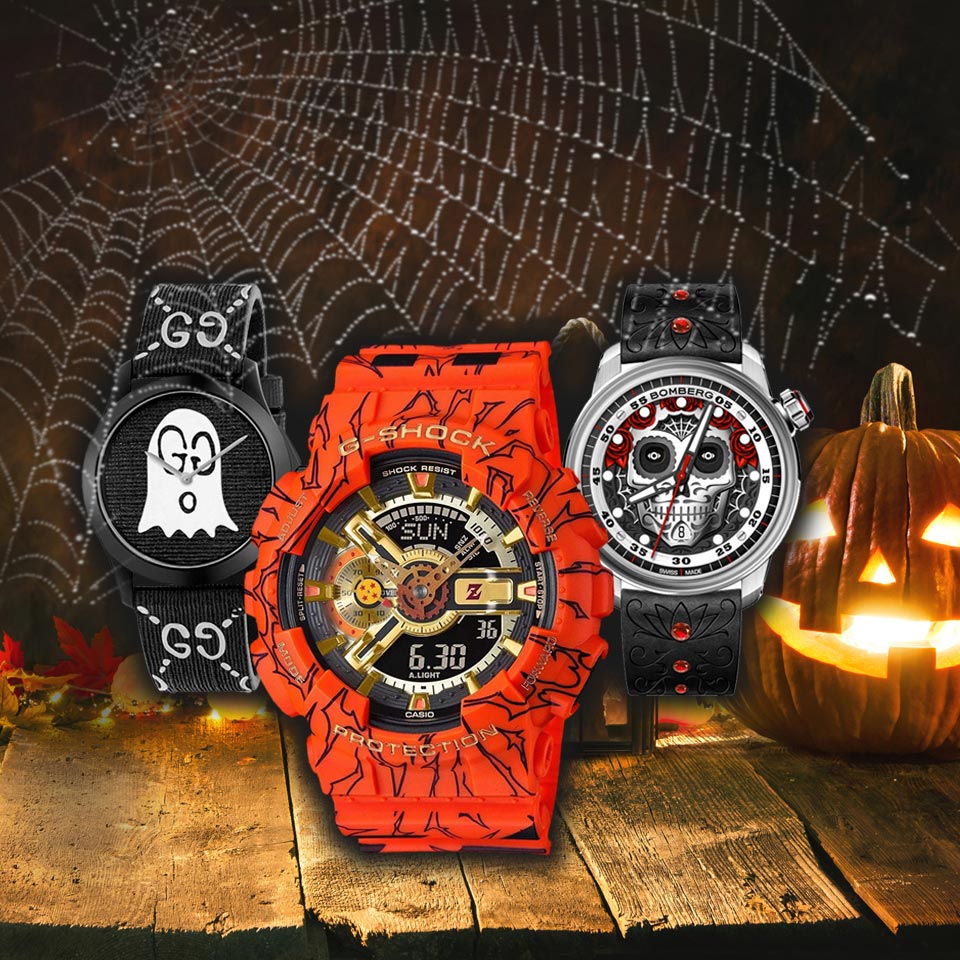 Getting ready for the most infernal party of the year. The holiday, which goes back to the traditions of the ancient Celts of Ireland and Scotland, is becoming more and more popular every year. Coming up with a Halloween costume is now one of the favorite pastimes of the people. You will meet everyone at the most infernal party of the year! Even those who in ordinary life adhere strictly to the office dress code, on the Night of All Saints allow themselves to have a full blast. If radical dress-up games are not for you, you can limit yourself to themed hours. In our selection, some "terribly" beautiful models are better than others - and there is no end in sight to this coven!

The pumpkin-colored model is dedicated to the anime series Dragon Ball Z and its protagonist Son Goku, who protects the earth from villains - aliens, androids and other creatures. The G-Shock itself will also protect anyone: this watch is extremely shock-resistant and ready for any challenge.

The watch, released in a series of only 250 pieces, is reminiscent of the Day of the Dead - a holiday dedicated to the memory of the dead, which takes place in Mexico, Guatemala, Nicaragua, Honduras and El Salvador. This, of course, is not Halloween, but the image of Calavera Katrina - a skull adorned with flowers and drawings - will fit perfectly into the dress code of All Saints' Night.

A model for those who are not ready for a pumpkin total look, but not against individual bright accents. CS Sports with orange elements on the hands and hour markers will not let you down even in the most extreme conditions (we already know how rich in extreme the carnival of evil spirits can be!) - and even after the holiday they will serve for a long time and for sure.

We advise you to read:  Kinetic technology

For ghost hunters, such prey is the most coveted. The portrait of the ghost (to be easily identified upon meeting) is engraved on a rubber dial and is branded a double GG just in case.

Remember the movie "Sleepy Hollow" and its character Ichaboda Kray played by Johnny Depp? Krei had a toy that he twisted to create the illusion of a bird in a cage. So: the L Duchen Art Kardinal watch is not an illusion at all, but a living reminder of this episode. The image of the cardinal's bird is created by hand using the technique of multi-layer lacquer miniature.

The image of Batman does not lose popularity among cosplayers, which means that the Invicta DC Comics Flash watch with the symbol of the human mouse on the dial will not be left without its owner. In everyday life, the model will “make friends” with a sport-chic wardrobe.

The dial with the image of a skull, around which a snake coils and scarlet roses flash with fire, looks a little creepy and at the same time in the style of rock and roll. This model is a great gift to a rebel friend or an excuse to start a riot yourself. We mean the fashion riot, of course.

Dressing up as Ziggy Stardust is a classic of the genre. The Raymond Weil watch, dedicated to the great musician, visionary and a little extraterrestrial David Bowie, will help you get into the image even more accurately.

This variation on the pumpkin theme, it seems, can be seen from space - the model turned out to be so bright. FB-01 will be appreciated by fans of sports watches and everyone who prefers rich colors to a restrained range. And what a delight the evil spirits will be!

Wrist Watch 0 37 views
Citizen has unveiled a new line of watches based on the vintage Tsuno Chrono inspired by Star Wars. Collection

Wrist Watch 0 24 views
With the approach of summer, no matter where and how we will spend the long-awaited or

Wrist Watch 0 68 views
G-Shock has unveiled a new collection inspired by Chinese porcelain. A characteristic azure pattern is used in the design of four