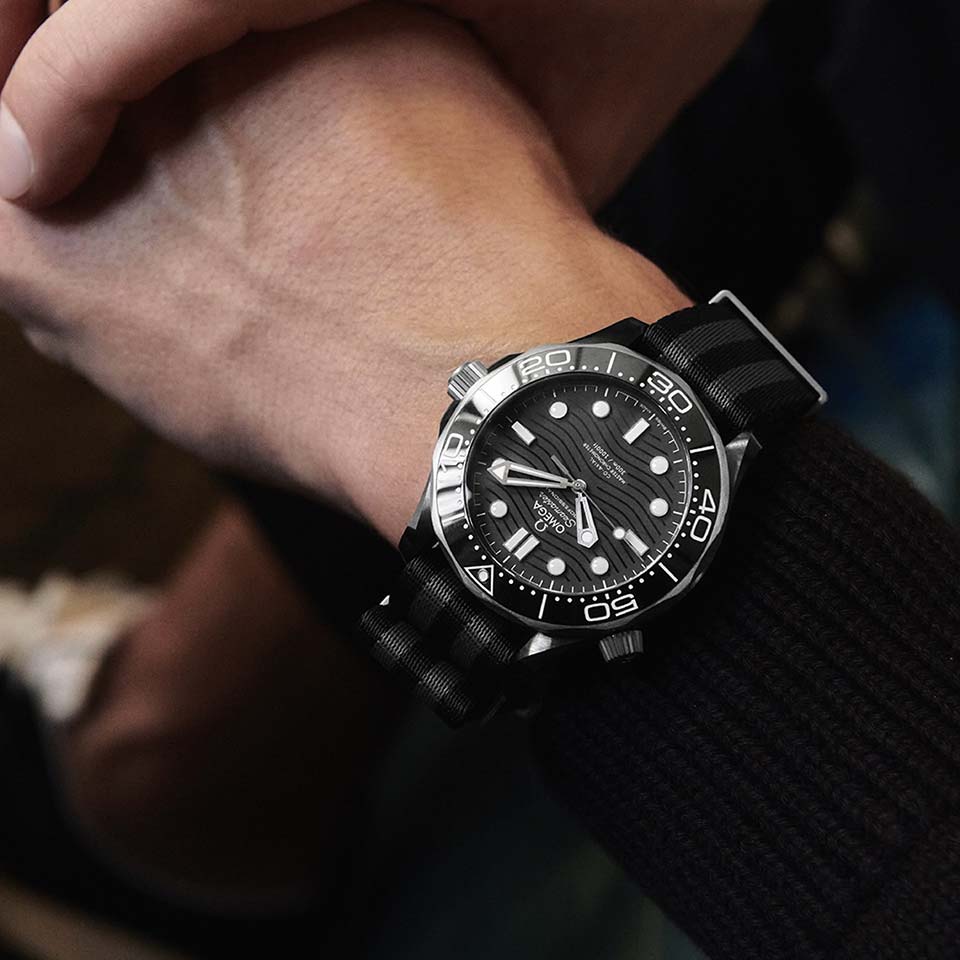 The so-called NATO watch strap is a very popular and understandable thing now. But we, catering to the curious, allowed ourselves to be distracted by this trivial "accessory" and hope that we will tell you something new and interesting.

The strap is designed to pass under the spring bars between the lugs of the case and under it so that if one of the bars breaks, the watch will remain secured. The strap is longer than usual and allows you to wear the watch over a wetsuit when diving, for example, or over a flight jacket - an incredibly versatile item.

The fact that the world is filled with a variety of different versions of the original NATO idea is blamed, of course, on Sean Connery, who in the very first James Bond film Dr. No”, walked with a Rolex Submariner on a narrow striped nylon strap of “regimental” coloring, and thus instantly set the vector of fashion development for this initially nondescript device.

The big brands have recently taken notice of this cheap item, and following Daniel Wellington to make it a cooler statement piece than the other watches that come with it, only the lazy didn't bother to offer an extra NATO strap in addition to the standard leather one. A little later, many manufacturers, gripped by vintage fever, decided to abandon leather altogether and offer only fabric options, Omega built an entire campaign around their striped ones.

We advise you to read:  Navy SEAL RSC - new models of the famous Luminox series

Watches for several thousand or tens of thousands of euros on inexpensive fabric straps, which are supplied by their owners, are not at all uncommon - many people want to look not only rich, but young and fashionable. Judging is not our business, and in favor of such decisions, we can safely say that NATO straps, by their nature, are stronger, which means that your ticking charm is screwed to you more reliably. And reliability, this is important - read our criminal chronicles - whole gangs of robbers make a living by tearing watches from the hands of honest citizens.

Wrist Watch
The date indicator is the most common of the complications in mechanical watches, it is also the most

Wrist Watch
In honor of the long-awaited premiere of Black Panther: Wakanda Forever, Citizen adds to the Marvel Classics collection

Wrist Watch
Fashion items from Gattinoni are known, first of all, thanks to the signature Planetarium pattern. concentric circles

Wrist Watch
A watchmaker is a peaceful profession, however, sometimes circumstances develop in such a way that watchmakers and watches

Wrist Watch
There is such a Japanese brand Citizen, which is the world's largest watch manufacturer. They are not just

Wrist Watch
The Swiss brand has introduced a limited-edition novelty created in collaboration with New York Road Runners (NYRR)
Add a comment Отменить ответ
We use cookies on our website to give you the most relevant experience by remembering your preferences and repeat visits. By clicking "Accept", you consent to the use of ALL the cookies.
Don't sell my personal information.
Cookie SettingsAccept
Manage consents