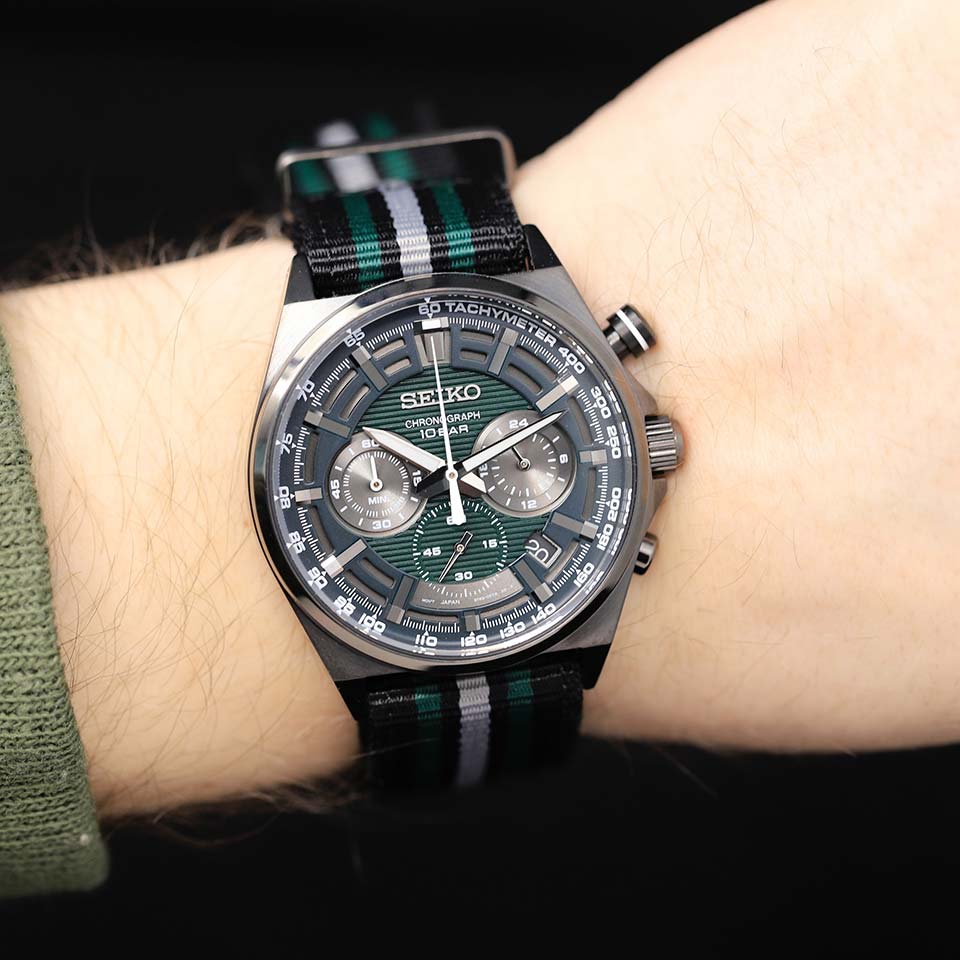 Seiko's new addition to the Spring/Summer 2022 collection, the SSB411P1 chronograph, is not impressive in the photo. A protruding pusher, a flat and rather busy dial, indistinct gray markers on dark green, a mixture of silver and white hands… This watch has to be held in the hands to see how good it is. 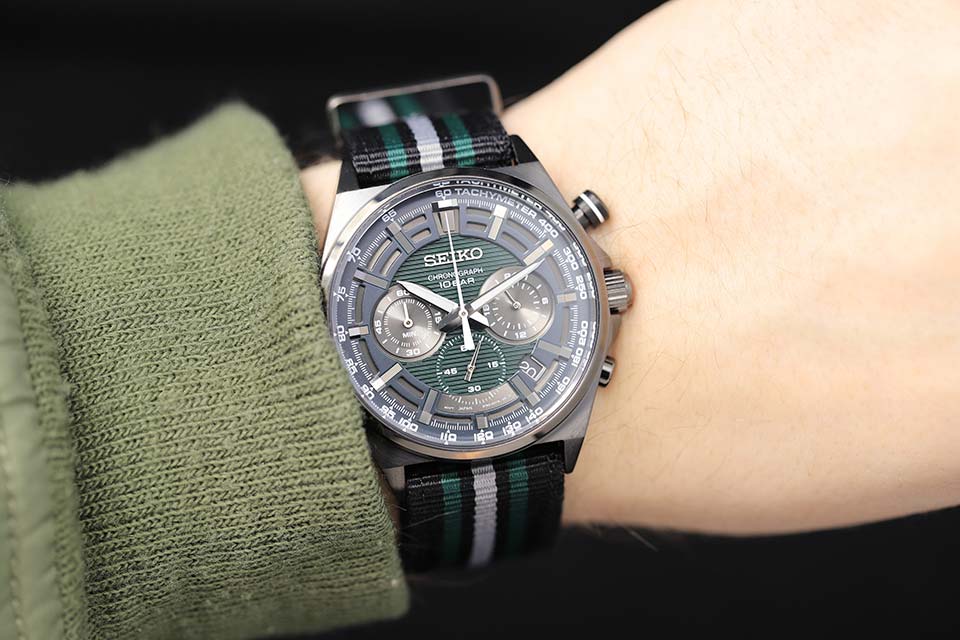 And they are VERY good - stylish discreet beauty and thoughtful details.

The dial, which in the photo looks rather flat and colorful, in fact turns out to be a complex, elegant, multi-layered design:

The watch is made in three colors: dark green, smoky gray (with shades), white (and silver). This chronograph model is available in different colors, but I like the reference SSB411P1 the most - the most restrained and noble palette. And the “foggy”, translucent smoky circle around the edge of the dial is the most elegant decision of Seiko designers.

The dial elements are well made. I don’t have a 20x watchmaker’s magnifying glass, but I couldn’t find any flaws with the available tools. Overhead labels - three-dimensional, hexagonal. The edges are polished. The Seiko logo is laid on, polished. The chronograph hands and small seconds are simple, flat, polished or painted, but there are no cutting artifacts. Hours and minutes are more interesting: three-dimensional, with a longitudinal edge. Lum is applied on them and on the “12 o’clock” mark – not to say a lot, it’s still not a diver, but you can understand the time at night.

Printing markup and service inscriptions neat, dates - too. The date disc is made in the color of the dial. True, for all variants of this model, only two colors of the date disc are provided - black and white. Therefore, everything is fine on dark and white watches, but on light gray watches, the date window is striking as a black hole in the dial. Another plus in favor of the SSB411P1.

We advise you to read:  Rainbow collection by GUESS

The arrows are multi-colored, but there is logic in this. What is connected with the chronograph (the central second hand and the 60-minute drive “by 9”) is white. What is responsible for the current time (hours, minutes, small second “at 6” and 24-hour indicator “at 3”) is polished silver. 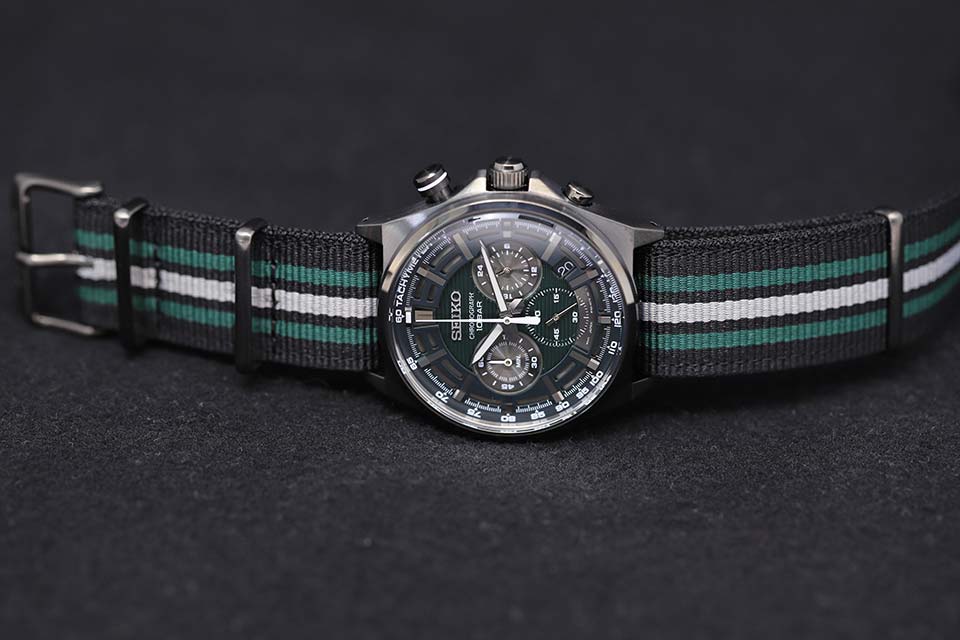 The steel case is impeccable in its simplicity. Forms are unpretentious, but the edges are sharp and clear. Matte black PVD-coating (the thinnest, a few micrometers, protective and color coating, which is applied to the watch case in vacuum at high temperature) is combined with the color scheme of the dial.

The highlight of the watch is a prismatic glass with a clear beveled edge. Combined with a faceted case and an intricate slotted dial, it gives the chronograph a touch of industrial style. The glass itself is hardlex. It is a Seiko-developed mineral glass with a hardened top layer that is supposed to be more impact resistant than sapphire crystals and more scratch resistant than regular mineral crystals. Seiko reserves the sapphire for more expensive models.

The most prominent (literally) part of the case is the 2 o'clock chronograph pusher. It is huge, much larger than the bottom pusher, and to make sure it does not go unnoticed, it is also decorated with a contrasting stripe. The SSB411P1 is part of the Seiko Conceptual Series Sports collection, "a watch with a sporty feel and look." It is very convenient to use the pusher: both when the watch is on the wrist, and if you take it off and use it in the manner of a pocket stopwatch. The button does not interfere with the wrist either. 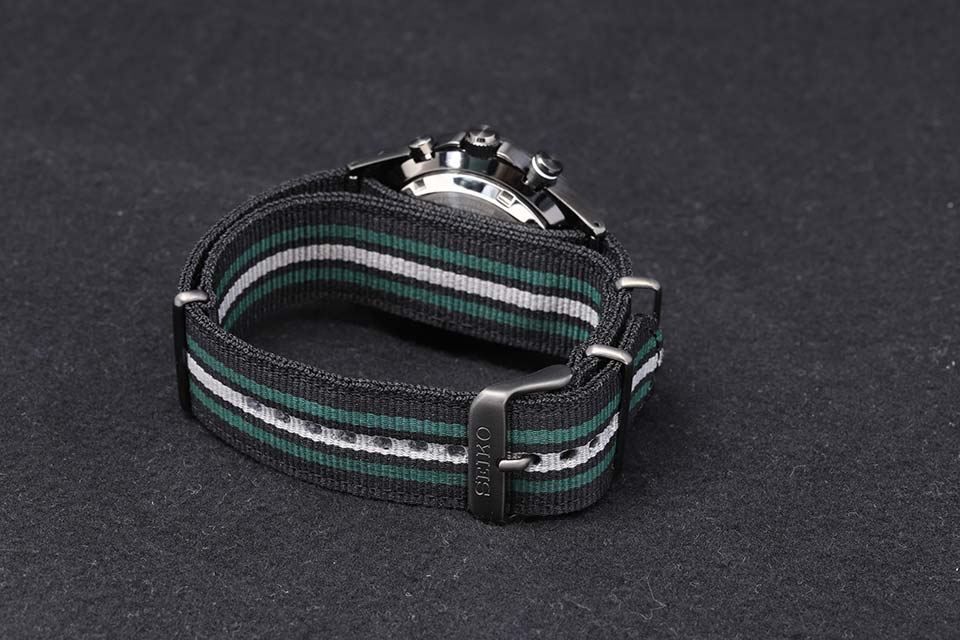 Thick, quality 22mm NATO strap also deserves compliments. The clasp holes are reinforced and the hardware is PVD coated in the same color as the case. The body size is comfortable. The diameter is 41 mm, that is, the watch will fit even on a thin hand (at least on my wrist 16,5 mm in girth they sit perfectly). The thickness is 12 mm, but it feels more on the hand, because under the case there is also the lower layer of a dense NATO strap.

The only thing that designers want to put a minus for is the crown without a logo. However, this is a matter of taste. 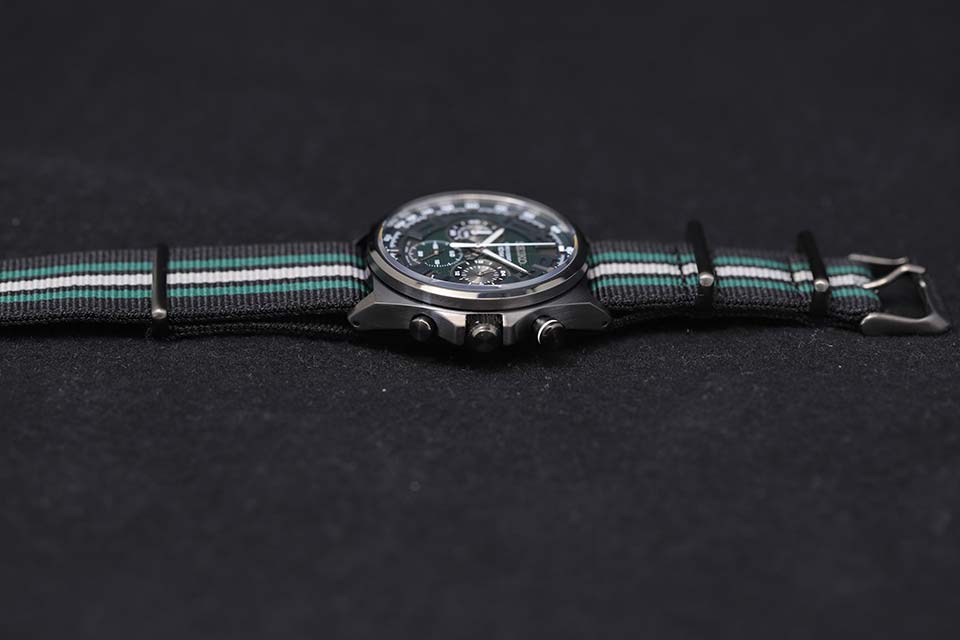 And one more thing: PVD coating. Theoretically, it protects the steel case from scratches. In practice, PVD may reduce case wear, but it is by no means eternal. And the scuffs in the black finish, through which the silver metal peeps through, are more striking than just scratches on the metal. It remains an intrigue when and where exactly the PVD will wear out. Most likely, on the case, the first scuffs will appear somewhere on the edges in less than a year of use.

We advise you to read:  How to customize the lunar calendar in the watch?

And the fastener that comes into contact with the table, armrest, and so on, will suffer even earlier. Of course, you can choose uncoated steel watches, which are also in the line, but they are not so beautiful. So you have to wear SSB411P1 more carefully - or turn off the perfectionist in yourself.

With the case finished, let's move on to the Seiko 8T63 mechanical-quartz caliber installed in it. But first, two words about what kind of “beast” this is.

A mechanical chronograph is a tricky thing. Its mechanism has about twice as many parts as a simple three-hand switch (and you yourself know - the more parts, the higher the risk of breakage). And it costs a lot. Quartz chronographs are simpler, cheaper, more reliable and even more accurate, because instead of a complex mechanism, the hands are driven by a stepper motor. But when you press the quartz chronograph button, there is no feeling of a “mechanical click”, and when you reset the readings, the hands smoothly turn to zero (the mechanical reset is instantaneous). Not critical, but less fun. And watches, especially not the cheapest ones, are bought largely for the sake of pleasure - isn't it?

It is not surprising that the mechanical-quartz movement of wristwatches appeared in the 80s, during the “quartz crisis”, when cheap and accurate quartz watches swept the mechanics out of the market. The old Swiss watch manufactories were looking for how to survive. That's when Frederic Piguet and Jaeger-LeCoultre came up with mechanical quartz chronographs - a novelty that would give the buyer the manufacturability of quartz and the feeling of mechanics.

A quartz caliber is responsible for the current time in the mechanical-quartz "engine" of the watch. As for the chronographic module, it is an ordinary mechanical one. Only instead of a spring, as in pure mechanics, a chain of gears is driven by an electric motor (one and only, and not one for each hand, as in traditional quartz). Since the design is like that of mechanics, there is a clear click and an instant reset to zero in place. The beauty.

In the 80s and 90s, such calibers were installed in Jaeger-LeCoultre, Breitling, Omega, IWC and other famous Swiss watches. It must be said that they lived up to the big names: for example, the JLC caliber 630 boasted 25 jewels, Geneva stripes and rhodium-plated bridges. But in the 2000s, even such a spectacular mechanical-quartz caliber disappeared from Swiss watches, apparently because the demand for expensive and status “true” mechanics finally returned.

We advise you to read:  Ladies watch Bering Ceramic 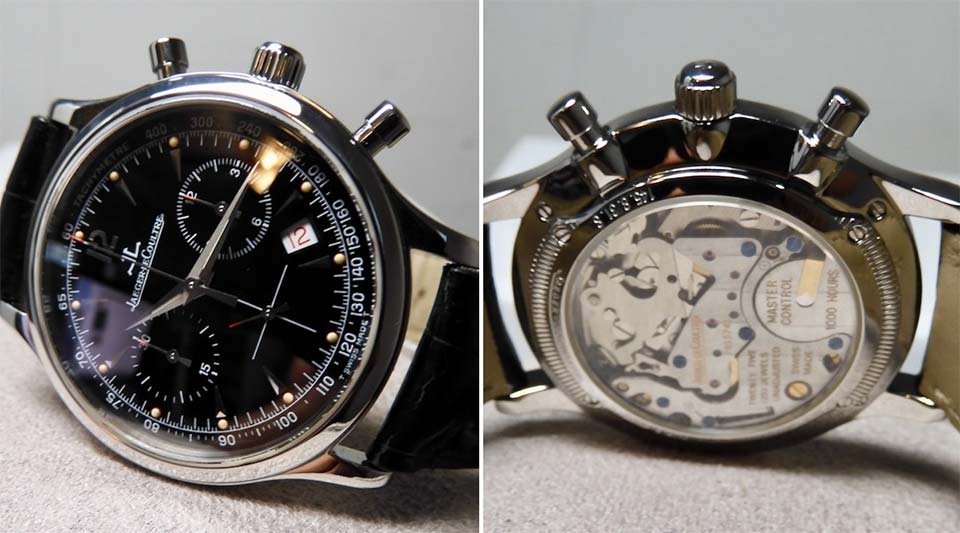 The Jaeger LeCoultre Master Control Mecha-Quartz (photo courtesy of luxurytimewatches.com) is a collector's item these days. By the way, this word is still written differently: “mecha-quartz” and “mecaquartz”, “mechanical-quartz” and “fur-quartz”.

The baton was picked up by Seiko - now it is the only major manufacturer of mechanical quartz calibers. They are put not only in Seiko, but also in watches of micro brands (Dan Henry, Autodromo, Yema). So now we say "mechanical-quartz" - we hear "Seiko".

Massive Seiko calibers are finished, of course, not in the same way as JlC. And there are no rubies. But they are much cheaper and also give the feeling of a mechanical chron (photo from wornandwound.com).

The feel of a mechanical chronograph

So, in our Seiko SSB411P1, the Seiko 8T63 caliber is installed - quite fresh, around 2015. It is made in Japan. And of course, its main feature is the chronograph. It is not very capacious - as already mentioned, only 60 minutes, and after that the countdown does not go to the second round, but stops. The top button starts, stops and restarts the timing. Lower - resets. Pressing them is a thrill for a watch lover: clear, juicy “mechanical” clicks, and when reset, the second instantly jumps to zero.

The central second hand is “dead”: it works only in chronograph mode, counting time in 1/5 second increments. The small arrow “on 6” always goes in increments of one second - both during measurements and in the current time mode - and misses some of the marks. But due to the small size, this is not striking and therefore not critical.

The calendar, of course, is the most common, not eternal. The date switches gradually, around midnight. The clock accuracy is claimed to be plus or minus 15 seconds per month. In fact, for the control ten days, the clock was only one second behind. To make it more convenient to set the clock, a hack (stop second) is provided. The standard battery should last for three years if you use the chronograph for no more than an hour a day. Therefore, it can be assumed that in reality, replacement will be required even later. In any case, when the battery starts to run out, the watch will warn you: the small second hand will start moving in 2-second increments.

Water resistance - 100 m. The case back is screwed, but the crown is not.
In my opinion, the watch will be best combined with a sporty or casual style. But for an official style, and even for smart casual, a watch is hardly suitable. 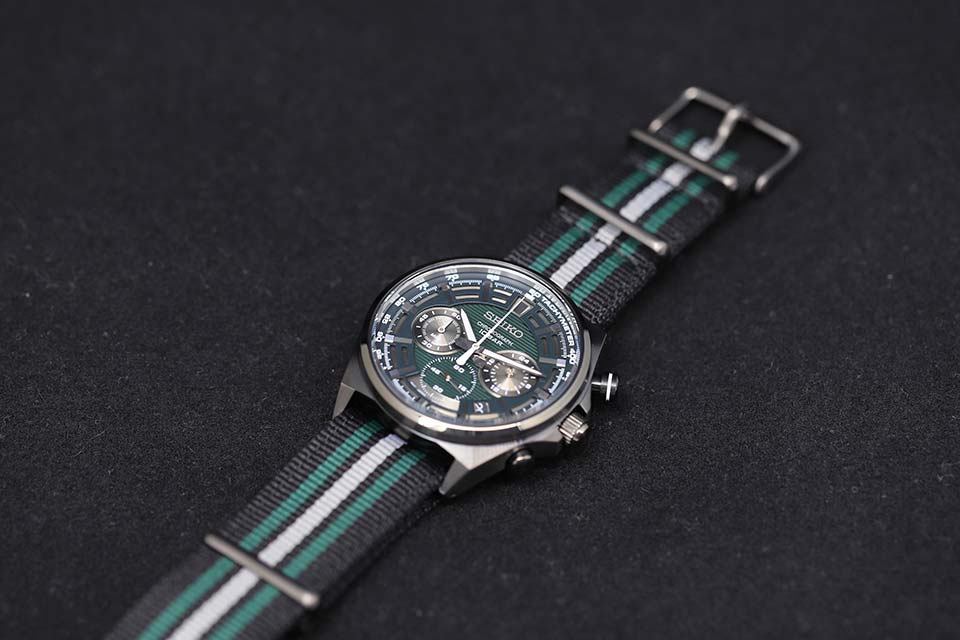 Wrist Watch 0 100 views
Delma has expanded the Cayman collection, which was first introduced in 2019, with new Cayman Bronze models with