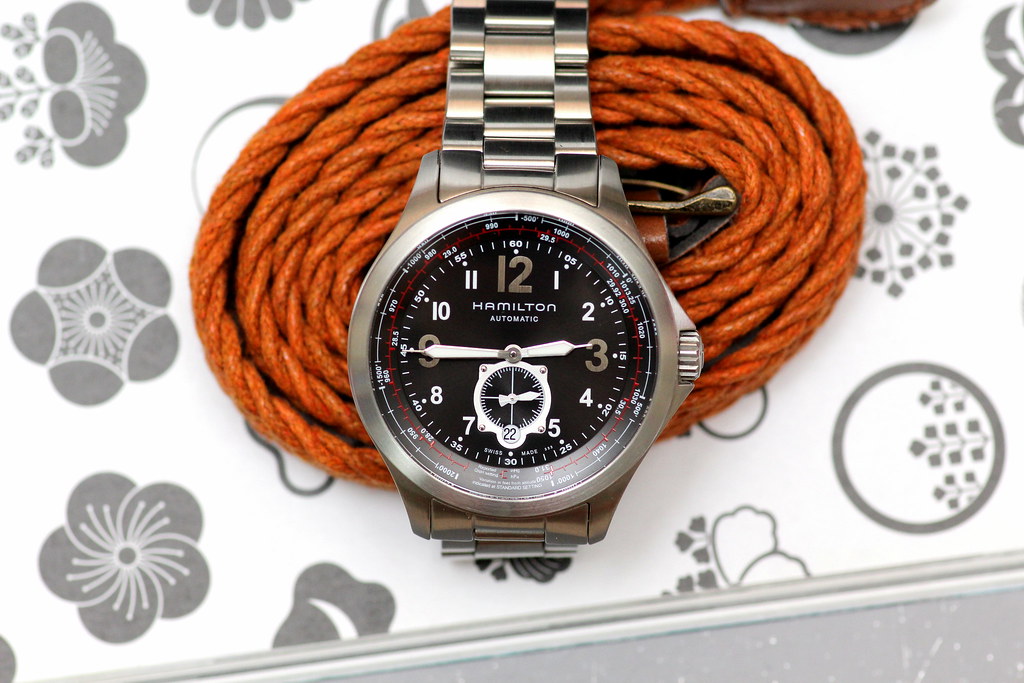 There is an opinion that Hamilton is a brand purely from the cinema. This is partly true. It is difficult to name the exact number of films whose heroes wear Hamilton. Some publications claim that there are about four hundred such films. There is no point in arguing and counting. But the fact remains that Hamilton is a brand with American roots, so the appearance of Hamilton in the frames of Hollywood films cannot be called an accident.

The clock, which will be discussed today, was not seen on the big screen. Themes seem to be better for the readers and the author of these lines.

The pilot orientation is seen not only in appearance, but also in the very name of the model, where the abbreviation QNE (Q-code Nautical Elevation) is present. As a person far from aviation, it was interesting to know what this means. It turned out that QNE is a code for determining the height, with which you can calculate the standard height, knowing the pressure. The takeoff and landing of the aircraft is carried out according to the airfield pressure (it is different), after takeoff and climb, the transition to QNE is made to separate the flight altitude levels (ensuring the necessary altitude distance). Air traffic control is based on the principle of separation. And this scale around the dial makes it possible to immediately determine the pressure echelon. Roughly speaking, this is a cheat sheet with the necessary ratios of pressure-height figures. There are a lot of such cheat sheets on the plane, but it is difficult to keep all the numbers and their ratios in your head, especially at the beginning of the flight.

As you understand, this scale is located around the dial, forming a kind of internal bezel. The presence of this bezel visually reduces the size of the case: 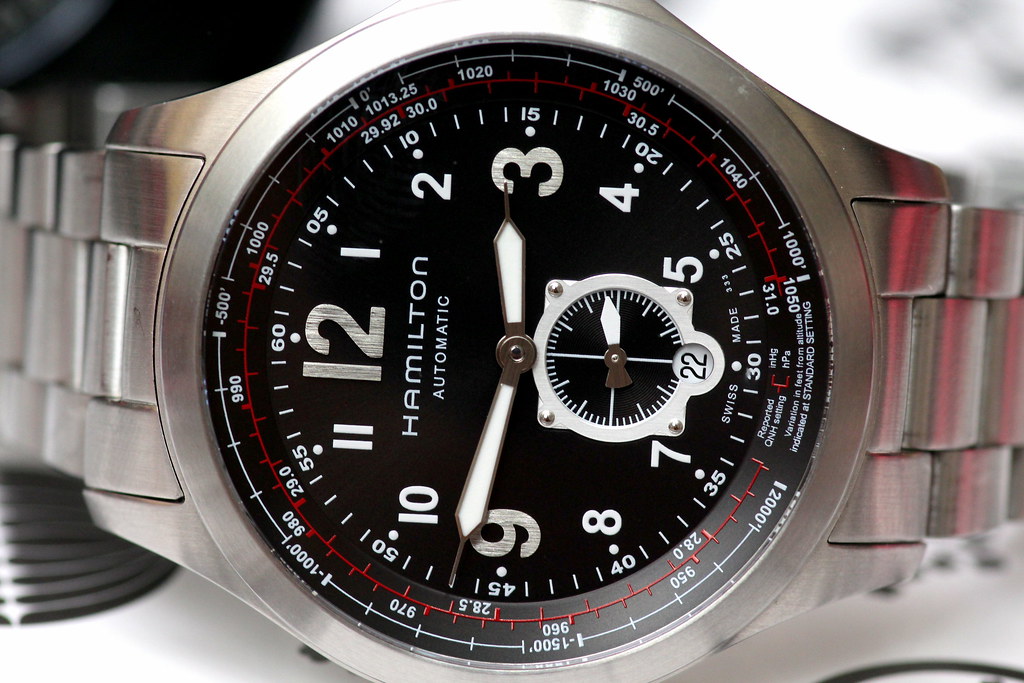 The second attribute of the pilot's scale is located on the back cover. These values, which at first glance seem to be a simple set of words, are called the ICAO phonetic alphabet. Adopted in 1956, it is still the standard for communication between those who take part in aircraft flight control both directly in the cockpit and outside it. However, this alphabet is used not only in aviation: 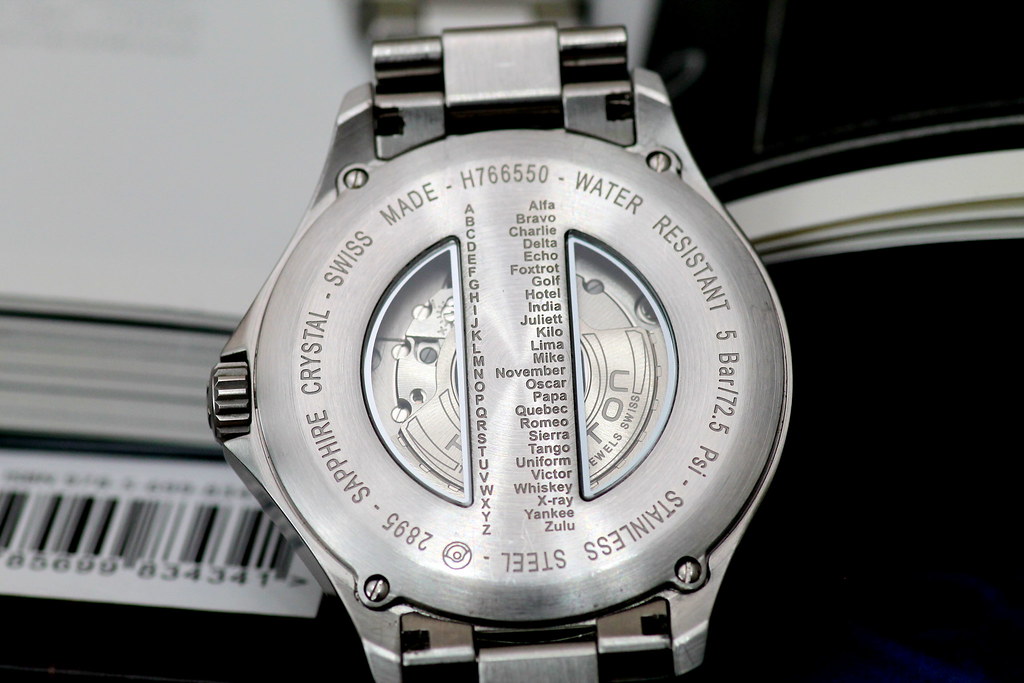 Watches with a small second hand have their own charm. And in this case, the arrow window fits perfectly into the dial in the form of a device on the aircraft control panel. Of the minuses, it is worth noting a rather small date window located in the area of ​​\u6b\uXNUMXbthe number “XNUMX”, and to be more precise, under the number in the window for the second hand: 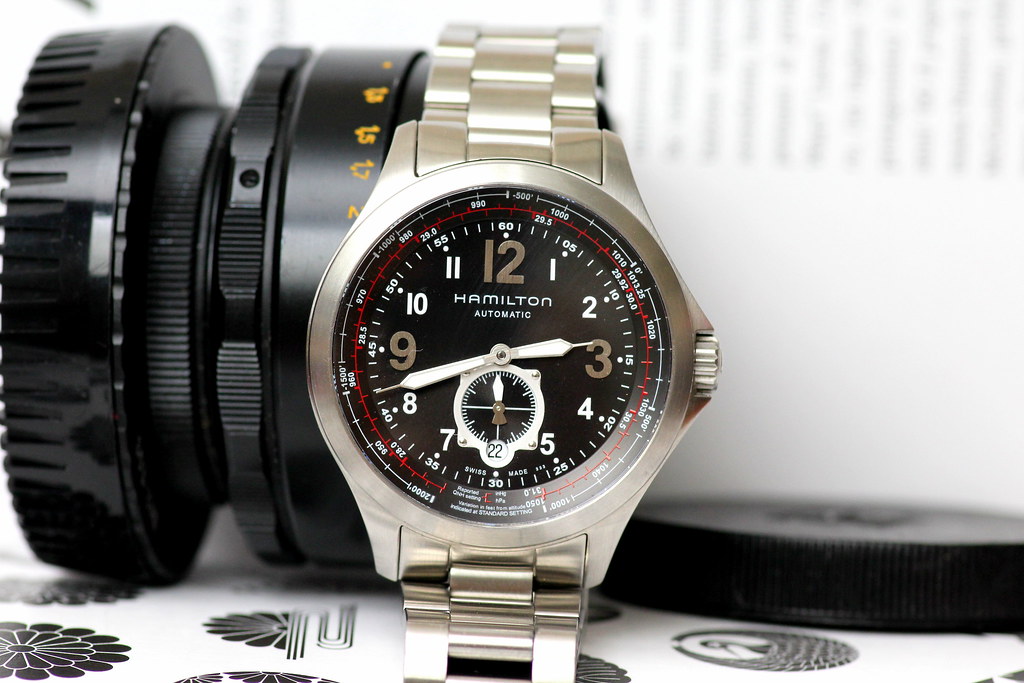 6497 or 2895? Such a question about the mechanism can be asked by looking at the dial. The desire of the manufacturer to produce watches with a small second hand puts it in a tough choice. Of course, we are not talking about in-house calibers. They are a different story. But if you take a closer look, it becomes clear that the choice was made in favor of 2895. Unitas has a second hand located lower, and there is no automatic winding there. ETA 2895-2, which this watch is equipped with, the mechanism is not the most massive, but sometimes goes beyond the Swatch Group:

In connection with the transition of Hamilton to the H-series movements, the basic version for models with a small second hand is the H-22 caliber. The watches in question were released even before the transfer to the updated calibers.

The links of the bracelet jingle slightly, but this does not make it bad at all. The clasp has a push-button lock: 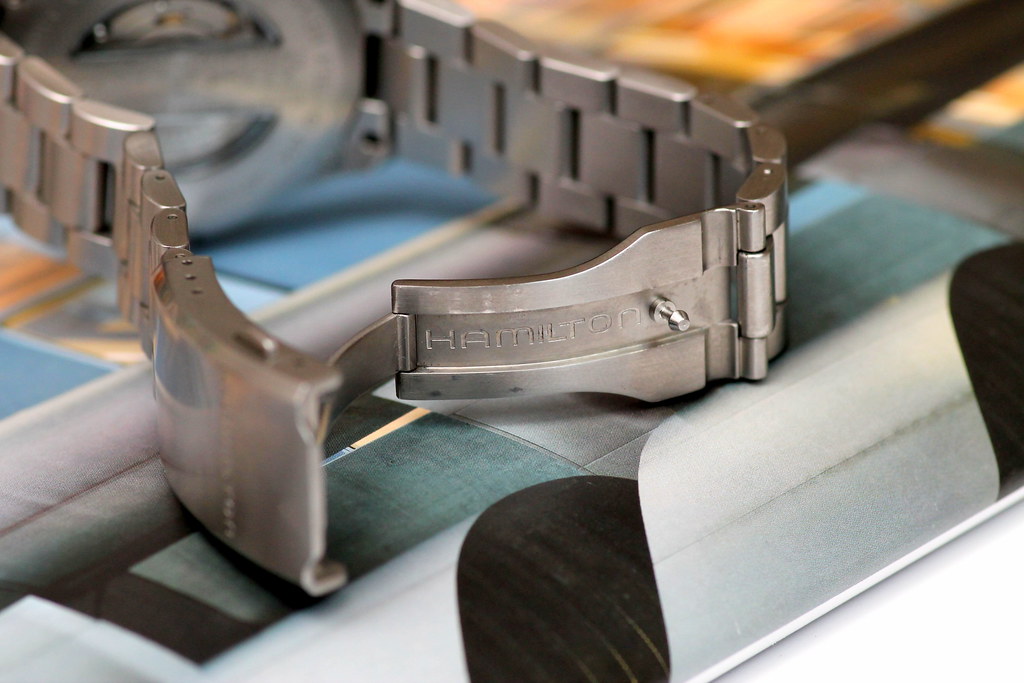 The case and bezel are moderately matte. It seems to be very convenient, but not so spectacular in terms of shine. If we take into account that watches serve for those purposes where brilliance is far from being in the first place, then other questions disappear by themselves. I foresee the question about the size of the case. My answer is slightly above average: 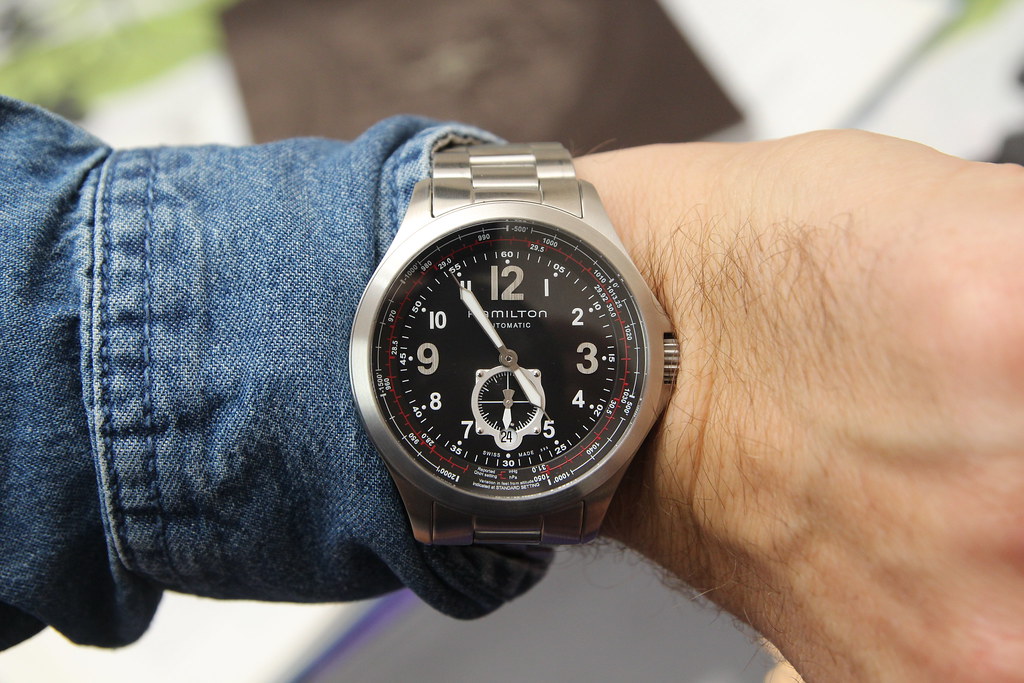 The time indication must be visible at all times. And so it turns out. Darkness is not a barrier 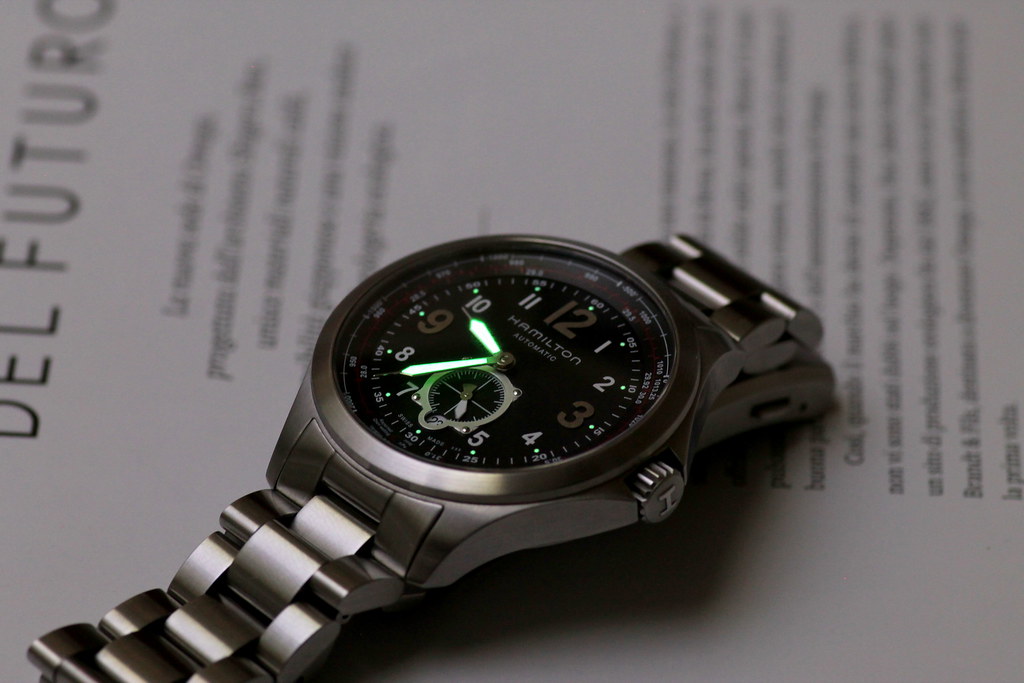 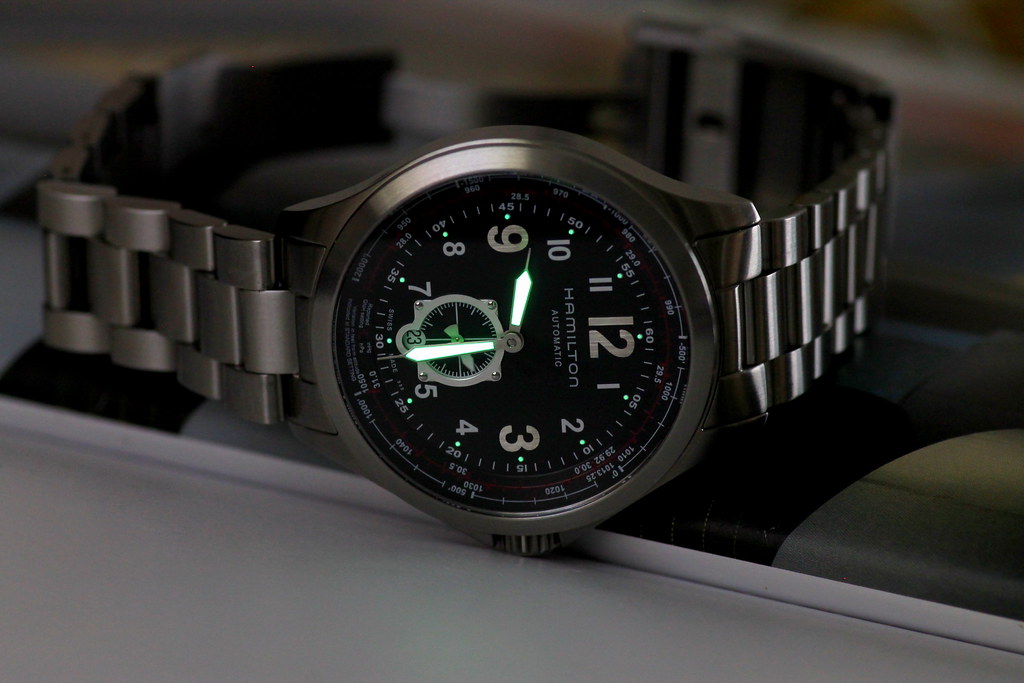 I don't know how many pilots wear this watch. I would venture to guess that yes, they do. But they are also worn by people who are not connected with aviation. But their watches are accurate, reliable, and the manufacturer is far from the latest in the watch world.

We advise you to read:  Why Raymond Weil watches are worthy of your attention