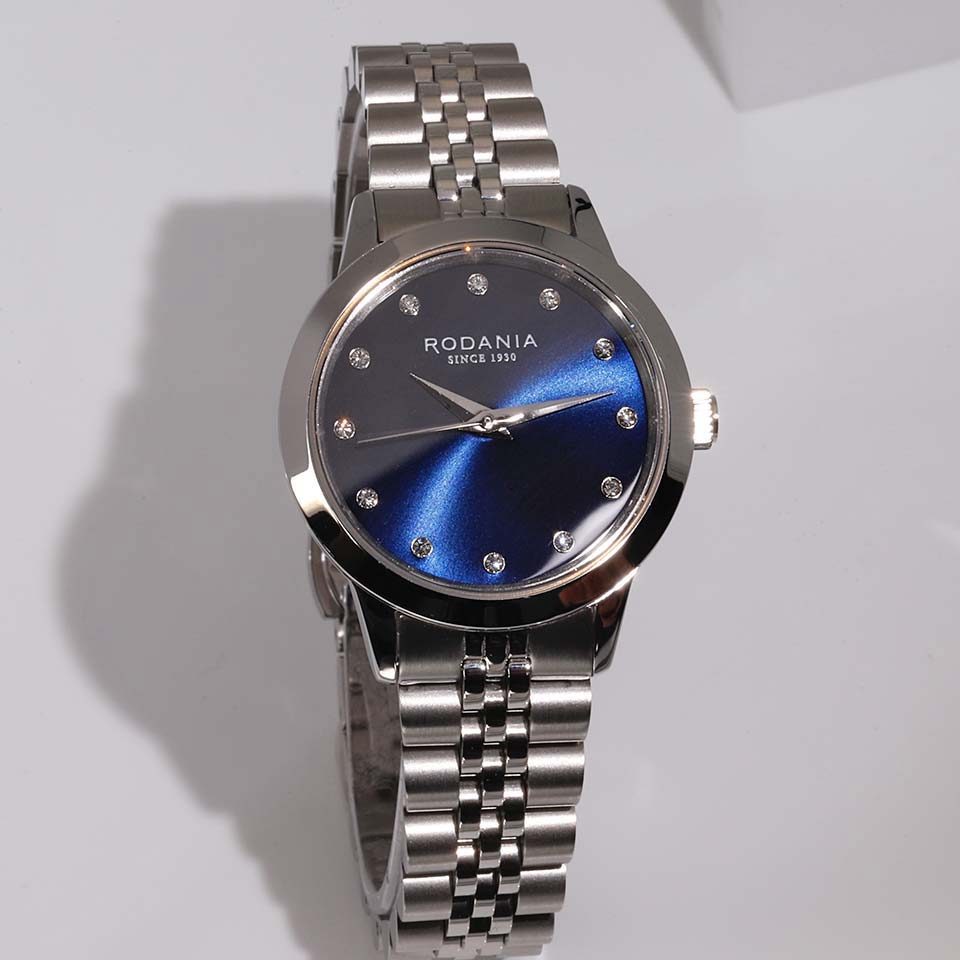 By the standards of Swiss watch brands, Rodania is relatively young. It was founded by Hans Baumgartner in 1930 in the Swiss canton of Bern. A little over 20 years later, in the 50s, an international distribution center was opened in Brussels, which became the starting point for Rodania sales around the world. In 1955, Hans Baumgartner entrusted the international management to a young and dynamic entrepreneur, Manfred Aebi, who was a Swiss citizen but lived in Belgium with his family.

Forty years later, in 1995, Manfred Aebi bought the company and moved the official office of Rodania to handle all logistics operations from Brussels. Twenty-five years later, in 2020, the Rodania trademark was bought by 3 entrepreneurs from Switzerland and Belgium, but it should be noted that the Aebi family still continues to keep abreast of the brand.

The box contains a small transparent gripper, inside of which, on a pillow made of snow-white eco-leather, there is a Rodania R10018 watch.

This is the whole package. It is very modest, to my great surprise, there was no place in the box even for a universal instruction manual. 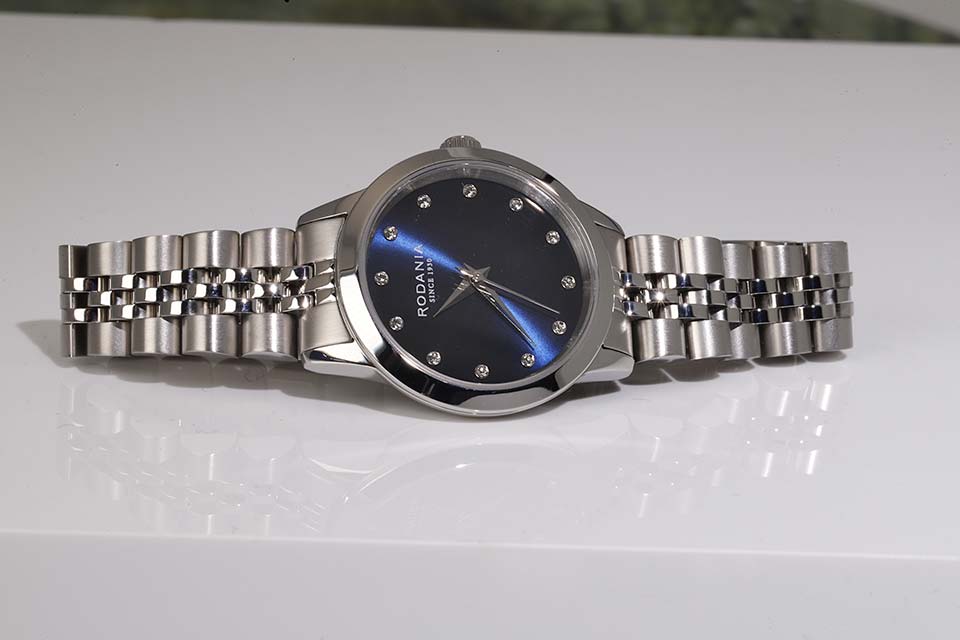 The case and bracelet of the women's quartz watch Rodania Montreux R10018 are made of stainless steel of the American manufacturer 316L. This universal steel has found wide application in the jewelry industry in the manufacture of accessories and costume jewelry of various types. An alloy of iron and chromium, which is part of the steel, forms a protective layer on the surface of the 316L metal, which is characterized by increased resistance to mechanical and chemical influences, and molybdenum protects products from destruction in sea water.

The watch has a silver-colored case without any colored inserts, the diameter of which is only 30 millimeters. The bezel is round, fixed. The dial is of a noble blue hue, in the zone of the twelve-hour marker there is the RODANIA logo and the inscription SINCE 1930. Each hour marker is marked with a crystal. I can not say that these are Swarovski crystals. This model uses classic dauphine hands with a wide base and a narrow sharp top, the counterweight repeats the shape of the upper part, only wider.

The model has hour, minute and second hands. The clock has a discrete rate, i.e. sharp jerks of the second hand. Surprisingly, the second hand almost always hits exactly in the middle of the hour marker crystal. The dial and hands are protected from external influences by sapphire glass. We all understand perfectly well that this is the conditional name of artificially grown corundum based on aluminum oxide. The most important property of this material is high hardness, resistance to mechanical damage and transparency inherent in precious stones.

On the reverse side of the Rodania Montreux, there is a cover on which you can see the engraved logo of the company, an inscription notifying us that the watch is made in Switzerland, as well as information that the watch is protected from moisture.

The crown is traditionally located on the side face to the right of the dial. The head has a relief surface, which, in theory, should provide a higher grip of the fingers with the surface of the head, but due to the rather miniature size, this is hardly felt. When looking at the crown from the side, we can see the Latin letter "R". 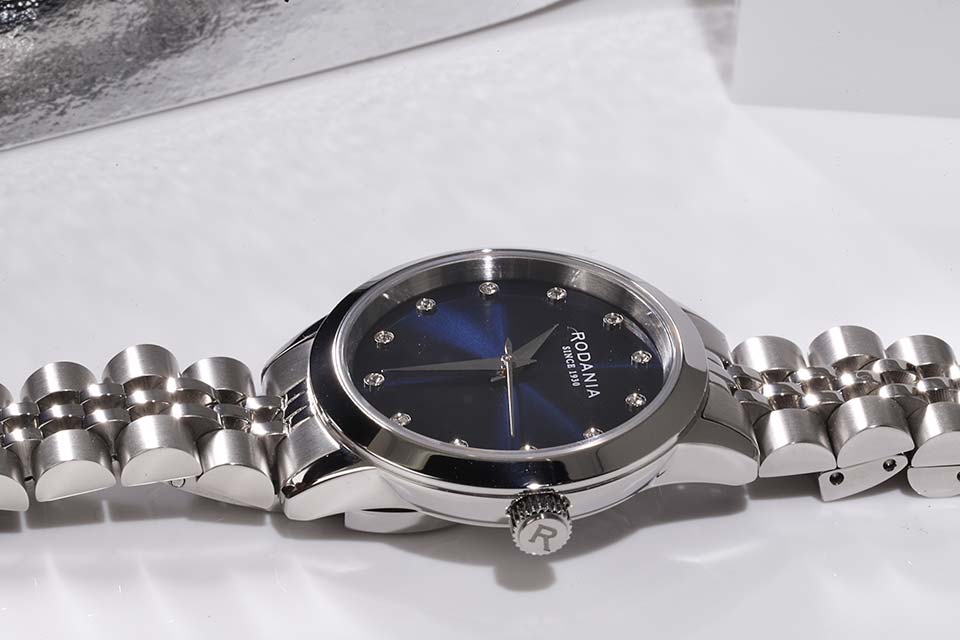 The case has rounded shapes and is practically devoid of sharp corners.

When looking at the watch from above, we can see that the bracelet fits snugly around the lugs, giving the impression of an all-metal device. There is no such tight abutment on the back surface. The bracelet rests on the ears from above, while the bracelet has special “wings”, thanks to which there is access to the cylinder and the ears.

The bracelet is equipped with a folding butterfly clasp, which provides for the possibility of adjustment (there are five removable links on each side of the clasp). Such a solution allows uniform adjustment of the length of the bracelet on both sides, which is especially important for graceful and thin female hands. 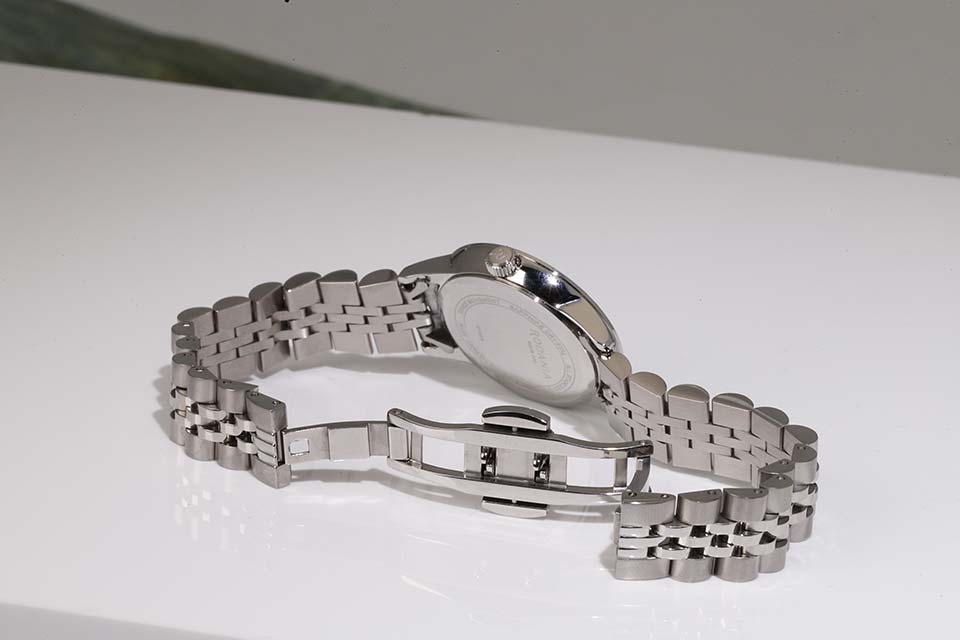 Even the complete absence of information about the caliber allows us to say that the movement is accurate, because the standard error of the quartz movement is from +15 to -15 seconds per month. Adjustment of the time displayed on the watch is traditionally carried out using the crown, which has two positions:

Everything is clear here, the watch is able to display time (hours / minutes / seconds) without the possibility of displaying the date. In general, more is not required for a stylish accessory. 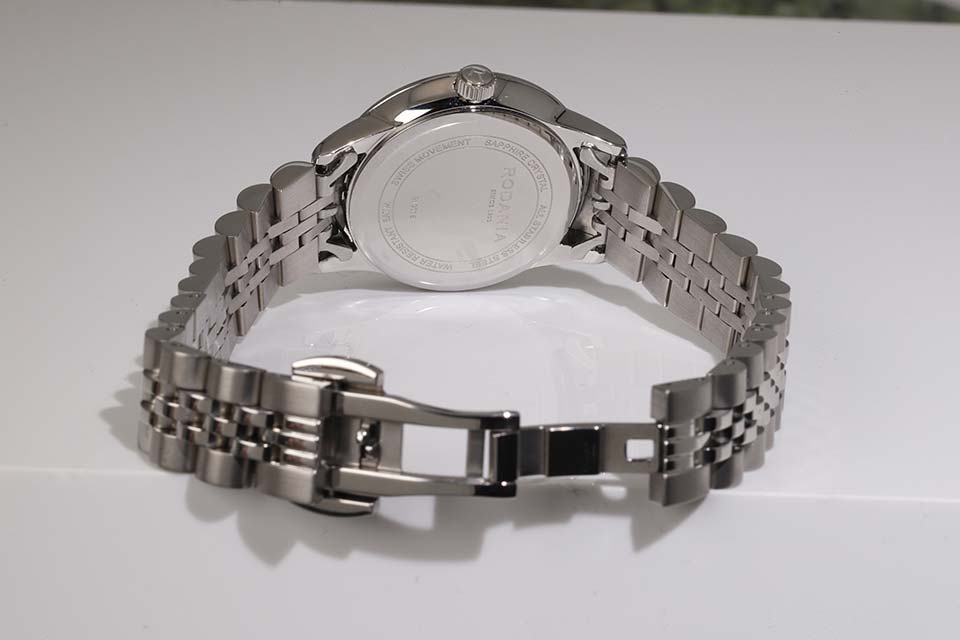 Of course, the Rodania Montreux R10018 is water resistant to the 50WR standard, which tells the knowledgeable user that with this watch you can wash your hands, take a shower and not swim too actively in the pool. It is better not to go into salty sea water with a watch.

The overall impression of the Rodania Montreux R10018 is purely positive. Stylish, thin, modern women's watches with chic hour markers in the form of crystals will not leave any lady indifferent. And let's be frank, all these numerous dials, many arrows, markings, numbers and apertures are not always useful and appropriate. Sometimes you just want to know what time it is. Rodania Montreux R10018 perfectly cope with this task and at the same time serve as a stylish accessory. This is a versatile watch that will suit both business and evening wear.

The quality of performance of the Rodania Montreux R10018 is not satisfactory. The watch is made soundly and conscientiously, I have no comments on the quality of processing of the case, hands, crown and bracelet. High quality and reasonable price are the key factors that the Rodania brand is focused on, starting its ascent.