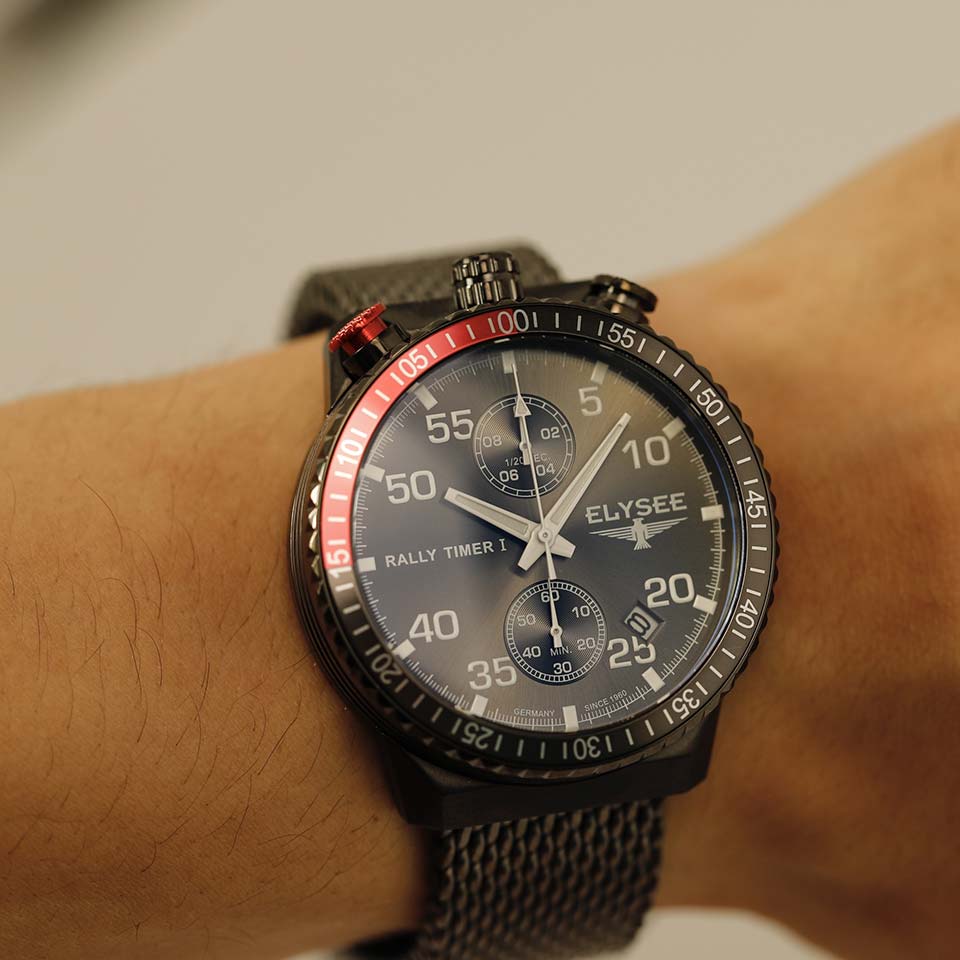 In one of the previous reviews, we examined in detail the watches produced by the Belgian company with Swiss roots. Today our topic is something similar, only Belgium gives way to Germany. Of course, Germany itself is a universally recognized watch power. In the table of ranks of Haute Horlogerie, she, perhaps, shares the honorable second and third places with Japan, immediately after Switzerland. However, in Germany there are many brands of a more affordable level, located not in the iconic Glashütte, but in other cities of the Federal Republic. Elysee, now based in bustling Düsseldorf, falls into this category.

A bit of history

On the dials of all Elysee watches, there is an image of an eagle (similar to the imperial German one) and markings: Made in Germany and Since 1960. In fact, the history of the brand began not in 1960, but forty years earlier, and not in Germany, but in a small place in commune of Le Bemont, in the Swiss canton of Jura.

Jacques Beaufort was a hereditary watchmaker, and it is not surprising that in 1920 he opened his own production in his native village, modest in size, but not without ambition. The latter can also be seen from the name, because "Élysée" is, translated from French, "Elysium", in ancient Greek mythology - the abode of the blessed, where the souls of the favorites of the gods fall (hence, by the way, the name of the famous Champs Élysées, Champs Elysees).

The first creation of Jacques Beaufort was a ladies' wristwatch in a massive gold case adorned with precious stones. In the same vein, the Elysee brand developed further, until the very death of Beaufort, after which it was temporarily forgotten - from the 1940s until 1960, when Harer from Pforzheim, Germany, acquired the rights to it.

Note that the deployment is not accidental, because Glashütte remained on the territory of the GDR, and in the FRG, Pforzheim in Baden-Württemberg became the main watch town of that time. In 1991, the brand became the property of entrepreneur Rainer Seume from Düsseldorf. This man rethought and radically changed the style of Elysee watches. Since then, the Elysee men's models, mechanical and quartz, have been made in a clearly defined sports style, they are primarily aimed at a youth audience full of vibrant energy, and at the same time they represent a combination of high quality and fairly affordable prices.

We advise you to read:  Precision, sophistication and bold design - the long-awaited addition to the RAYMOND WEIL Tango collection

We also note that now the company is part of a group of its own name - Elysee Group, which unites under one "roof" a dozen companies, watch and jewelry, and also that management has passed to the next generation of the Zoime family - Julian.

And now let's move on to our chosen sample for review. This is the Elysee Rally Timer I quartz model. 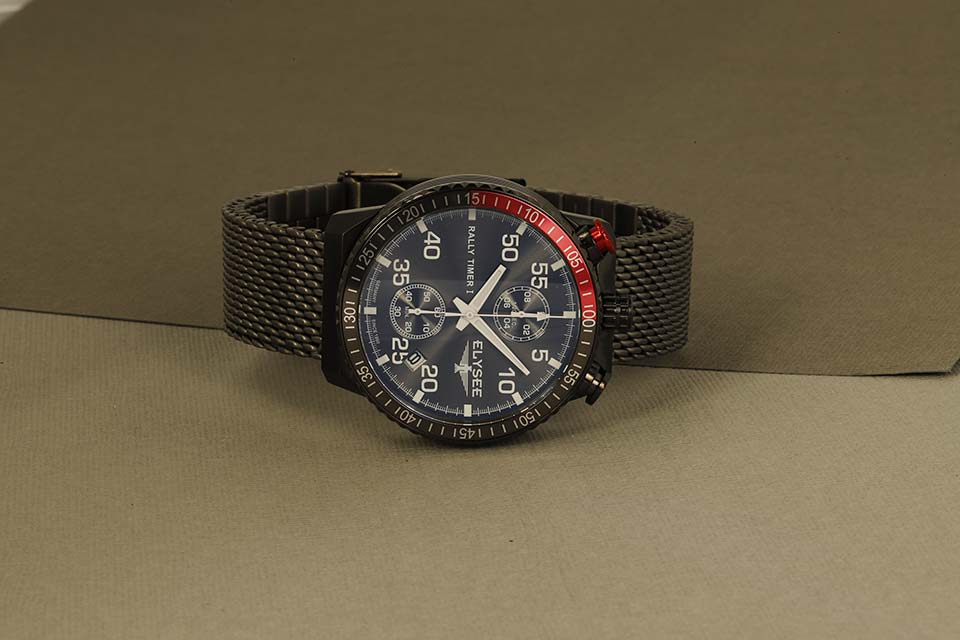 The chronographs of the Rally Timer I collection are distinguished by a rare design solution: they are made in the layout of the bullhead - “bull's head”, in which the crown and chronograph pushers are located in the upper part of the case. The buttons at the same time look like horns, hence the name ...

It is argued that such an arrangement of the watch controls is the most convenient for racing drivers, to whom (in this case, rally drivers) the model is nominally addressed. Let us doubt: in our high-tech time, professional pilots and navigators - rally participants - use fundamentally different tools to control the passage of the track. So Elysee has some stylization going on here.

However, it achieves its goal: the "bull's head" scheme, perhaps, brings the look of the watch to a very brutal level. Here it is worth remembering, for example, the last (at the moment) film by Quentin Tarantino “Once Upon a Time in… Hollywood”: Cliff Booth, played by Brad Pitt, wears exactly this type of watch - though of a different brand, but the point is that bullhead emphasizes masculinity and even some aggressive character of the hero. 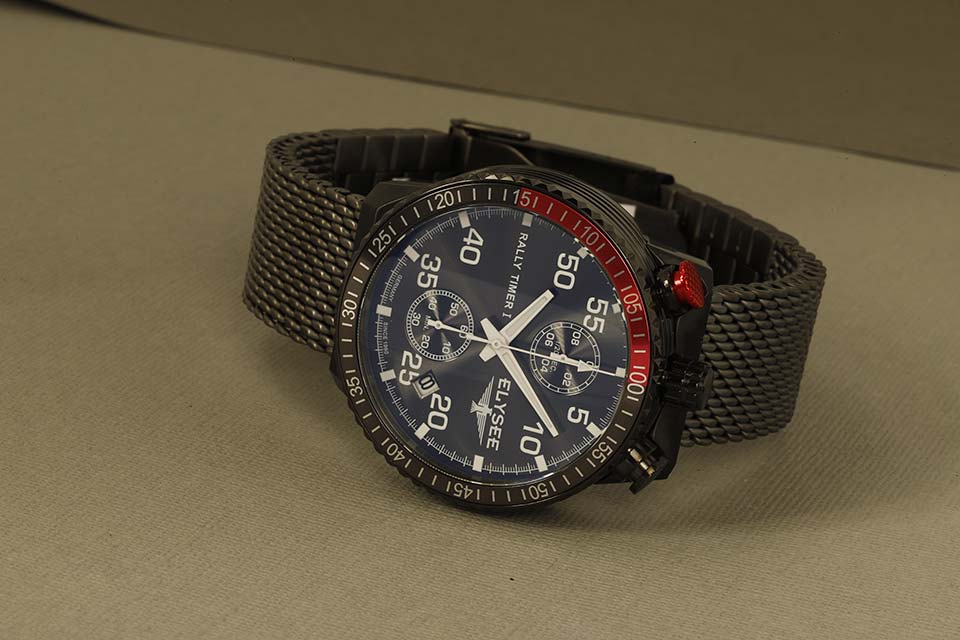 Let's go back to our sample. The "horns" (that is, the chronograph buttons) are located close to the lugs of the bracelet. However, this does not interfere with ease of use, the buttons are pressed without problems, moreover, with a slight click. The left (red) starts the chronograph, when pressed again, it stops. The right (black) resets the arrows to zero. However, we will talk about the functionality a little later, but for now we only state that it is somewhat more difficult to operate the crown, because you don’t need to press it, but twist it, and there is not enough room for fingers on the “bull’s head”. The trouble is small, and it’s not a problem at all, given that the movement is quartz, which means that the head is infrequently in demand.

We advise you to read:  Women's Michael Kors watch from the Chronos collection

More about the body

The case is also not quite usual: the creators of the model clearly avoided smooth contours… Wristwatches are sometimes called “boilers”. Professionals and sophisticated amateurs frown at the same time, but in the broad masses the term remains alive. We also see it as vulgar, but in this case… yes, the watch case of Rally Timer I reminds of a cauldron!

When viewed in plan - a perfectly round shape, but on the side - an equally perfect cylinder, only decorated on the surface with cylindrical grooves. Thoughts come to mind about something like the cylinders of a steam engine (steampunk, yes) or, as already mentioned, the boilers of some kind of power unit. The aforementioned brutality acquires additional formidable features ... 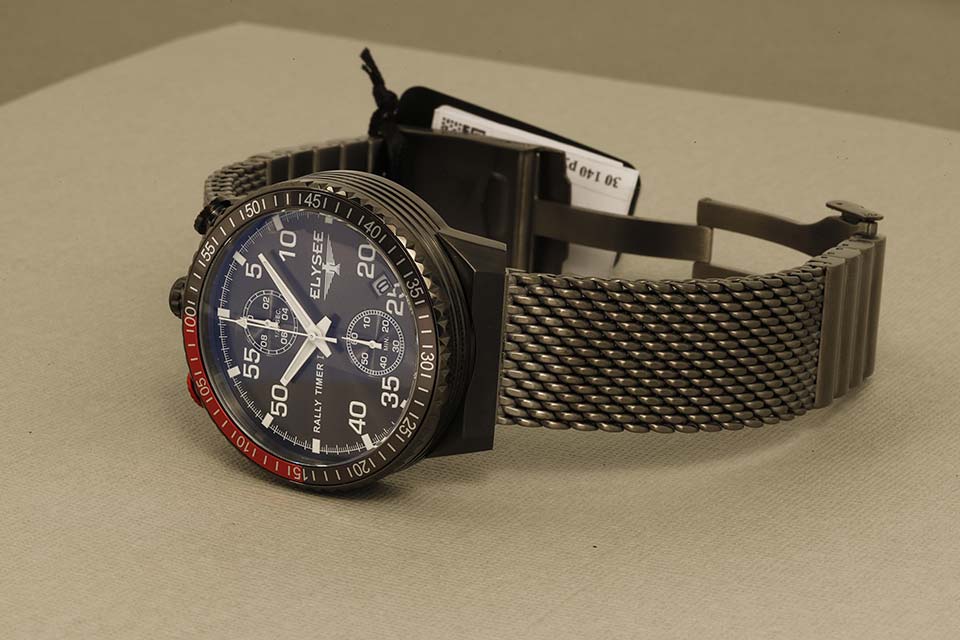 And the case itself, which is quite normal in size (diameter 44 mm, thickness 15 mm), seems larger than it actually is. This feeling is enhanced by the color scheme of the model in question: stainless steel is covered with a matte black PVD coating.

By the way, it is also on the Milanese weave bracelet, equipped with a folding clasp with a locking system and several removable links (5 on one side, 4 on the other) to fit a particular wrist. 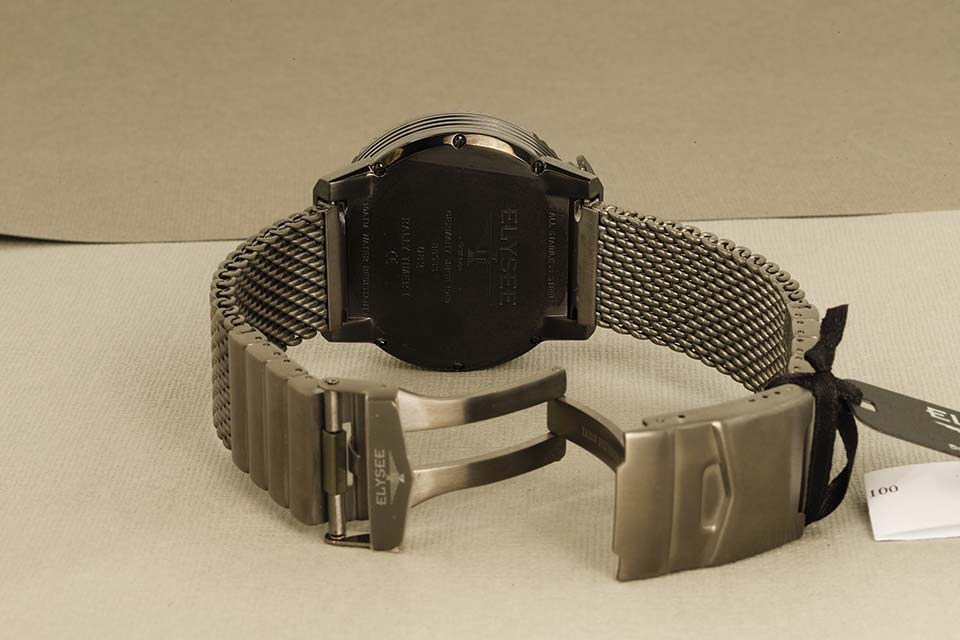 The overall strength of the model is accompanied by its tangible weight: weighing showed 206 g. We will end the section with a mention of a sapphire crystal with anti-reflective coating, a steel case back with 6 screws (a professional tool is needed) with engraved information about the model and, finally, a statement of the 100-meter water resistance of the case ( you can swim and dive shallowly, while the crown and buttons are not screwed, which raises some doubts, which we did not check).

The heart of the Elysee Rally Timer I watch is the Japanese Miyota 6S20 quartz movement, which has been produced for a long time and has been used quite successfully. The mechanism has a feature that also drew our attention to this particular chronograph: among the functions is the countdown of twentieth fractions of a second. When the left (red) button of the chronograph is pressed, the hands of the latter begin to move, and the twentieths hand (position "12 o'clock") rotates during the first 30 seconds of the countdown, after which it freezes at "zero", and then only the central second hand and the hand move 60-minute drive (6 o'clock position). But when you press the red button again, these two arrows freeze, and the top one almost instantly jumps to the position corresponding to the moment. Thus, the duration of the time interval is measured with an accuracy of 0,05 seconds. When the reset button (black) is pressed, the hands elegantly return to their original positions.

We will not do without criticism, or at least an expression of bewilderment. The Miyota 6S20 movement basically has the function of counting the current seconds. Chronographs usually use a small second hand. In this model (as in all Elysee Rally Timer I) there is no such arrow. Why is not very clear. The positions “9 o'clock” and “3 o'clock” on the dial are occupied by the markings “RALLY TIMER I” and the logo of the brand – is there simply not enough space for the second hand? It seems to us that a solution could be found, and the lack of current seconds for an instrument that claims to be highly accurate is an omission. 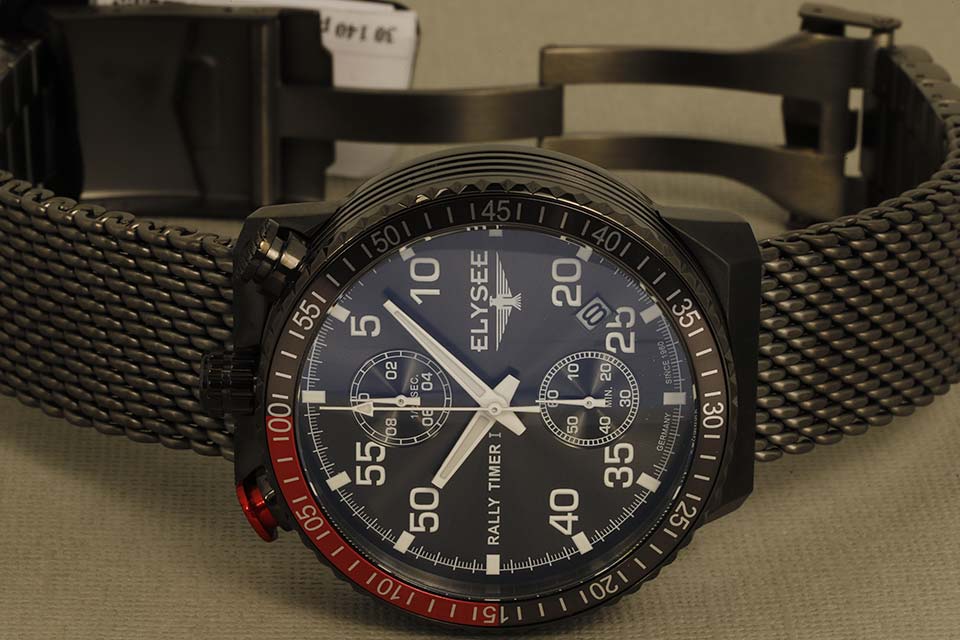 But in the presence of a "diving" bezel, with pleasant clicks turning in one direction (as expected, counterclockwise). The bezel has a 60-minute “reverse” marking, so it’s more like a yacht than a diver – well, let’s assume that it’s a rally…

A quarter circle, from 0 to 15 minutes, is highlighted in red. Again, let us doubt - this time in the harmony of the combination of a very accurate chronograph with such approximate (this is the default) bezel readings. Perhaps a tachymeter scale would be more appropriate: after all, a “car racing” model.

And I would also like a slightly larger date window, which is located at "4:30". Well, yes, this is already nitpicking ... 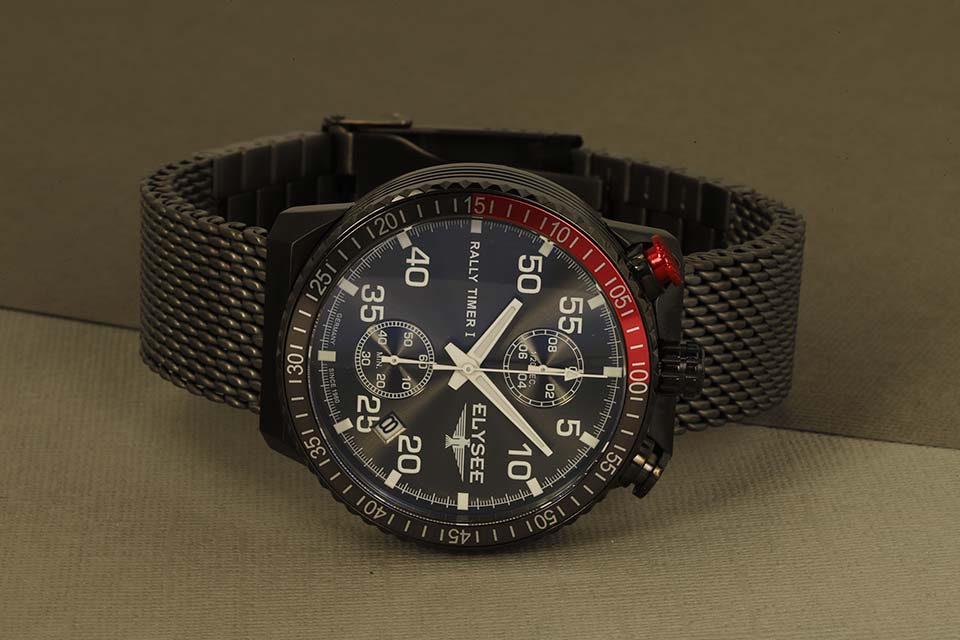 As for the dial as a whole, it is also black (does not fall out of the image), it is read very clearly, the luminescent hands are distinct in complete darkness (checked). And not tested: the declared accuracy (± 20 seconds per month - observations in "handicraft" conditions showed just zero, that is, absolute accuracy) and battery life (4 years are declared, how to check?)

For an energetic man - a very good choice! Albeit not as his only watch ...

Wrist Watch
Seiko watches are the whole world! Excellent, reliable and precise mechanics; one of the first

Wrist Watch
Ferragamo has unveiled a new version of its best-selling F-80 model, encasing it in

Wrist Watch
Imagine that you live in the early 19th century and are planning to travel from Beijing.
Add a comment Отменить ответ
We use cookies on our website to give you the most relevant experience by remembering your preferences and repeat visits. By clicking "Accept", you consent to the use of ALL the cookies.
Don't sell my personal information.
Cookie SettingsAccept
Manage consents