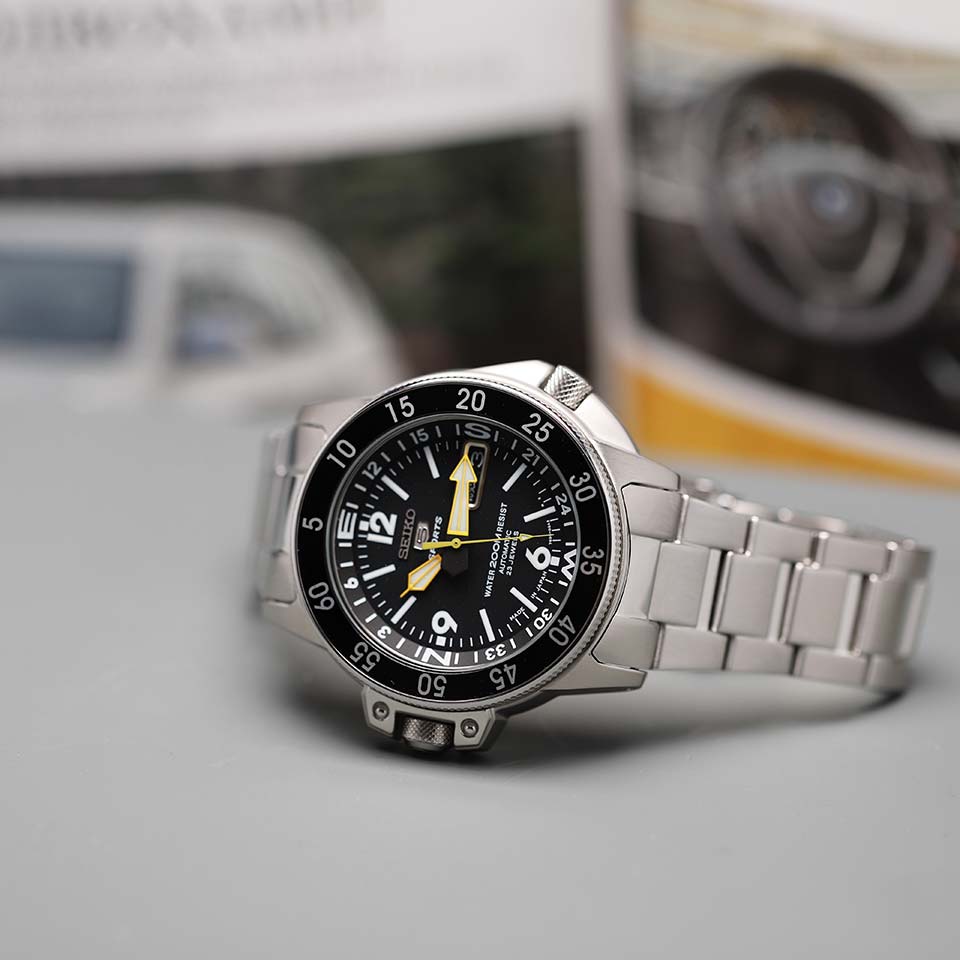 Seiko watches are the whole world! Excellent, reliable and precise mechanics; one of the world's first quartz watches; the most advanced technologies, including the use of satellite navigation and solar energy; unconditional recognition on all continents and exceptionally reasonable pricing policy.

Today we are talking about the SKZ211J1 model, which belongs to the iconic Seiko 5 Sports collection. 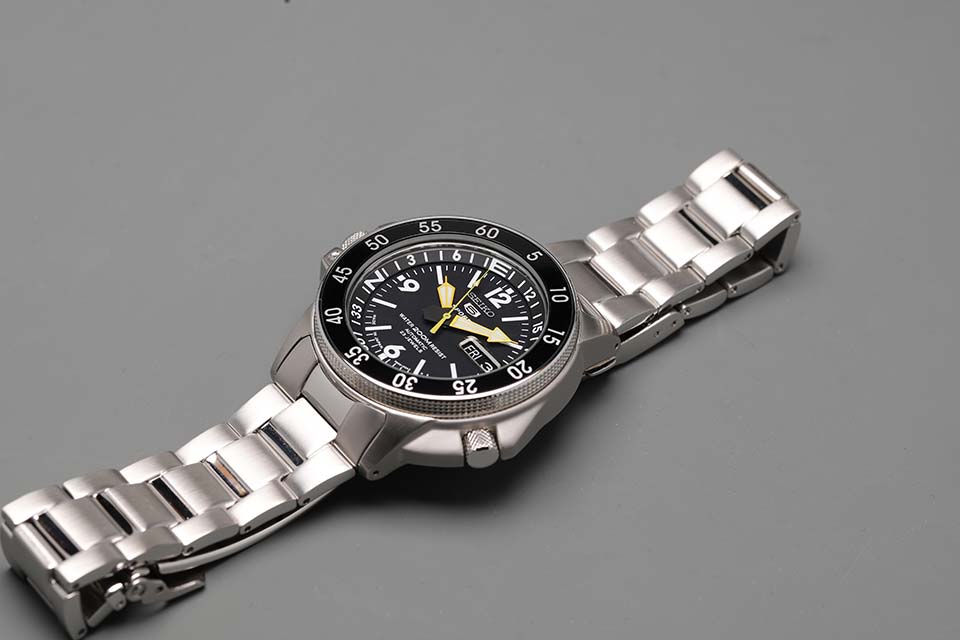 A few words about the collection

The number 5 in the name denotes five properties that are mandatory for the watches of this collection:

The first Seiko 5s date back as far as 1963, with the Seiko Sportmatic 5s quickly becoming iconic and now a coveted rarity for collectors. A few years later, the name Seiko 5 Sports was born: a watch for every day, but in a pronounced youth-sports style. And, of course, at an affordable price.

A true legend was the SKX007, released in 1996 on a new generation movement - caliber 7S26. All subsequent models and modifications of the Seiko 5 Sports are the descendants and heirs of that legend. Including our today's sample - SKZ211J1. 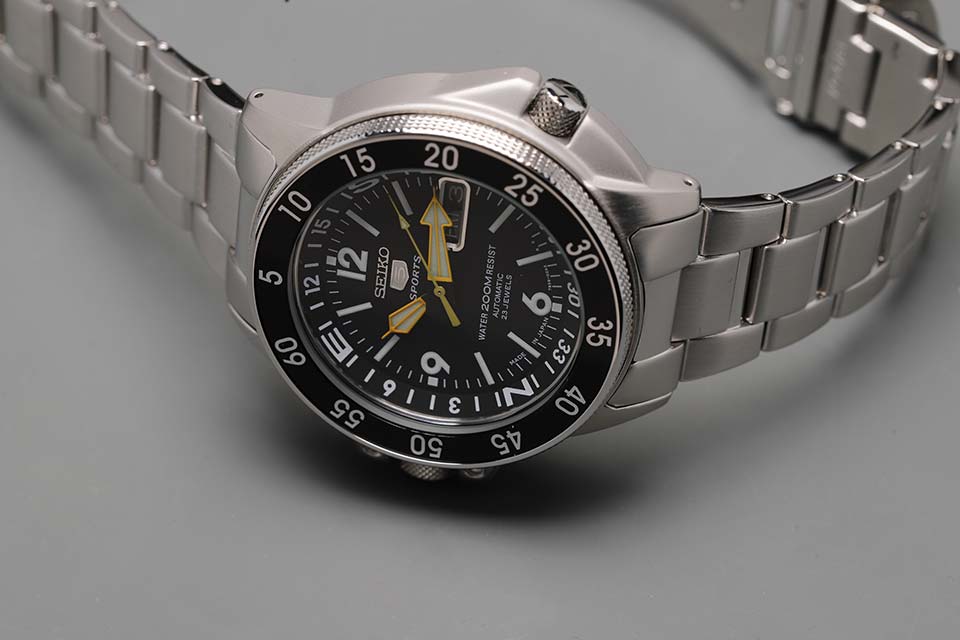 The watch is powered by the Seiko caliber 7S36. In fact, it is almost the same as the original 7S26. The difference is only in the number of stones: the 7S36 has a couple more, totaling 23. The balance makes 21600 semi-oscillations per hour. Of course, self-winding, with a bidirectional rotor. The total power reserve is claimed to be 41 hours.

Auto winding with its proprietary Magic Lever system is very effective: you just need to move a standing watch as it starts to run. However, it should be noted that manual winding, which is usual for automatic movements, is also not provided here. And this is somewhat unfortunate. It is recommended to start the watch if it has stopped by swinging it in a wide horizontal arc for 30 seconds. Some "craftsmen" say that it is even better to remove the back cover (it is, of course, screwed / unscrewed) and gently turn the rotor a hundred times. We didn't dare to do it.
It is also a pity that there is no "stop second" option. This creates certain difficulties for setting the exact time, and sometimes you really want to!

We advise you to read:  Dive into the abyss: a short history of conquering the ocean in a wristwatch

And finally, about the accuracy of the move. Declared value -20/+40 seconds per day. Today it is quite a lot, but in fact everything is much better. Our copy went ahead no more than 10 seconds. 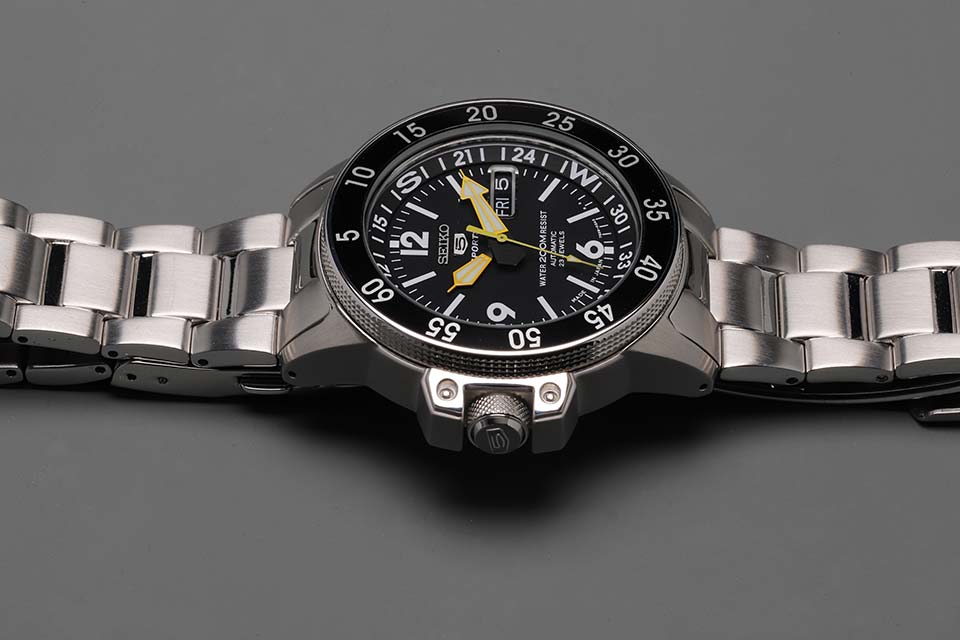 Of course, all in high quality 316L stainless steel. The case is quite massive (diameter 42 mm, thickness 14 mm), as befits a real diving watch, and this one is just that: there are all the attributes of compliance with the international standard ISO 6425, including water resistance of 200 meters. I don't want to dive...

A solid back cover (as mentioned above - screwed), it has the necessary engraving, including the heart-warming inscription "Made in Japan". Yes, the J in the reference means exactly that: made in Japan. Versions produced at Seiko facilities in other countries have a K suffix.
The fluted bezel rotates (naturally, only counterclockwise) very comfortably, with due patience, you can count all 120 clicks. Front - branded Hardlex mineral glass, not much inferior sapphire.

Finally, the heads. There are two of them. The main (but, we remind you, not clockwork), fluted, protected and screwed down, is in the 5 o'clock position characteristic of the Seiko 4 Sports. It is considered that for diving it is the most convenient. This head (after unscrewing) can be extended by one or two clicks, but about the corresponding manipulations - a little later. The second crown, at 9 o'clock, also fluted and protected (but not screwed), controls the compass scale. More on this later as well.

A three-row bracelet with a folding clasp does not cause the slightest criticism. The last thing in this section: the watch seems to be quite weighty. Weighing showed 172 grams. But on the hand, the weight does not feel superfluous. Everything is done flawlessly.

We advise you to read:  Mondaine Essence Eco-Conscious Collection - new colors for models 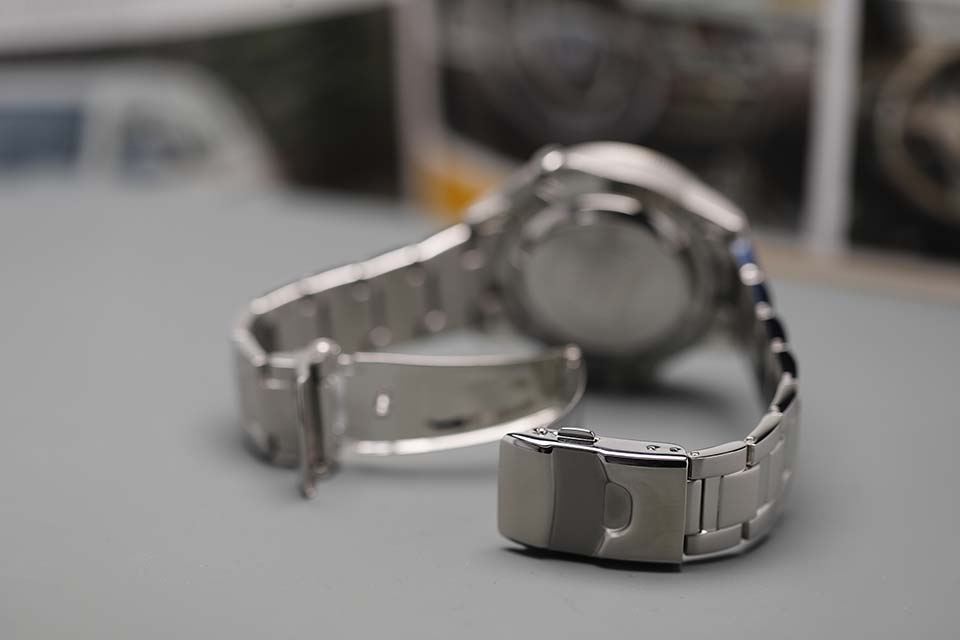 This is perhaps the most interesting. On the one hand - an ordinary three-hand switch with the date and day of the week. On the other hand - ordinary, but not quite.

So. Unscrew the crown, which is at 4 o'clock. To do this, it needs to be pressed a little more along the axis. Unscrewed. Move it out with one click. We rotate on ourselves (counterclockwise). This is the day of the week setting. And we notice that for each day there are two designations: one in English, the other in hieroglyphs. Probably Japanese.

Rotate the head away from you (clockwise). This is the date setting. There are no surprises here, everything is in Arabic numerals.
We remind you: around midnight (plus or minus a few hours), it is strongly not recommended to make these settings!

Pull the head out to the second click. Now you can set the time, that is, the hour and minute hands. Note: if you rotate them against the move, then the second hand also makes a backward movement, but a short one, and then stops. It starts as soon as the head rotates forward. Apparently, it is more correct to set the time all the same with movements along the way, and not against.

At the end of all procedures with this head, you must not forget to push it back, press it and, at the same time as pressing it, screw it. 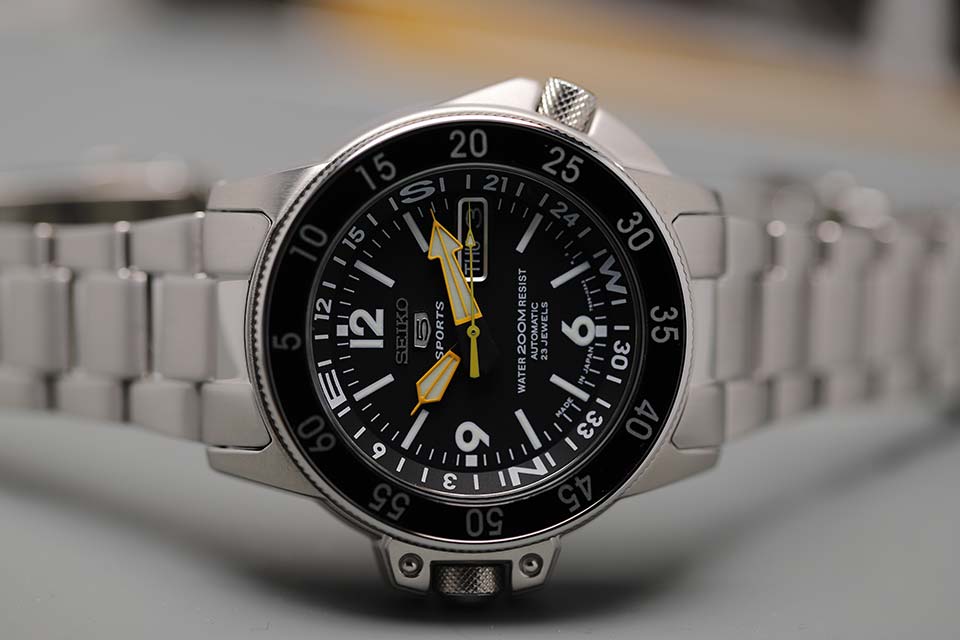 As for the crown at 9 o'clock, it is specific to this particular model, SKZ211J1. Let's take a look at the dial. On its periphery is the compass scale! It is this scale that the left head controls! It manages easily and naturally ... We will not talk about how to use the compass here, because this has been repeatedly explained in various articles, including our blog.

And about the dial in general. Brutal style: “black on black” (especially in combination with a black diving bezel), three numbers (“12”, “6” and “9”, and in position “3” there are calendar windows), extremely clear marks-strokes , massive arrows with sharp tips - the indication is unmistakable! Even in the dark, the LumiBrite phosphor works like magic, literally.

We advise you to read:  More or less: how many hours should be

Finally, the obligatory markings on the dial, reminiscent of the name of the collection, the water resistance of the model, the basic data of the mechanism (self-winding, 23 jewels). Everything is as it should be.

What to say in conclusion? Seiko 5 Sports SKZ211J1, even with a couple of noted shortcomings (lack of manual winding, no “stop second”), is a worthy tool for a diving enthusiast and, at the same time, a stylish watch with a very “energetic” character. 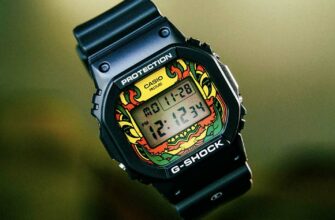 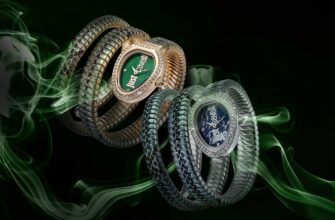 Snakes and panthers - update of the animalistic collection of Just Cavalli watches
The "King of Animal Fashion" needs no introduction.
6 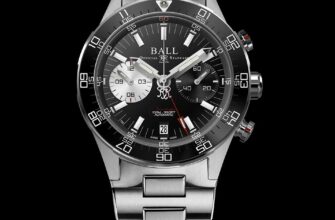 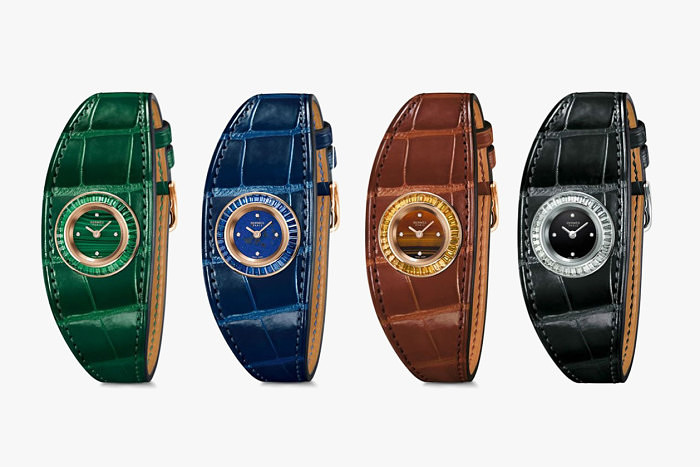 Faubourg Manchette Joaillerie watch by Hermès
At Baselworld, the brand showcased a fresh
8 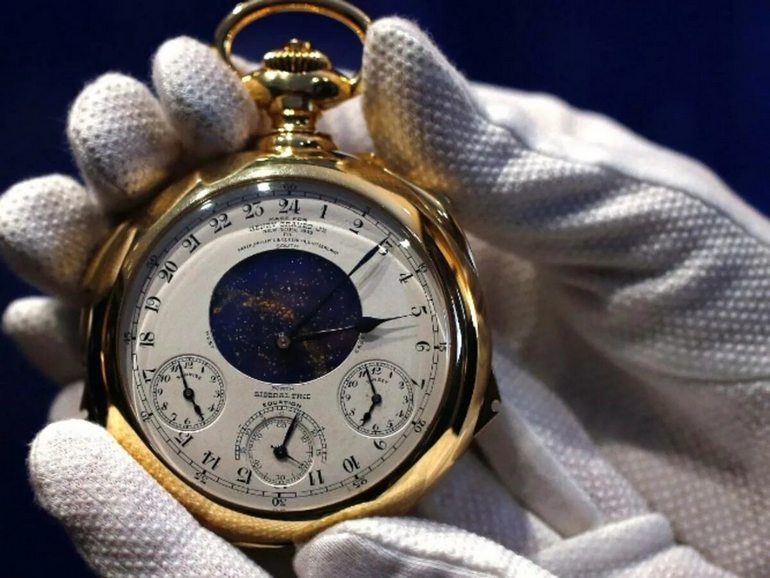 12 most expensive watches in the world
What would you prefer: a luxury mansion by the sea
19 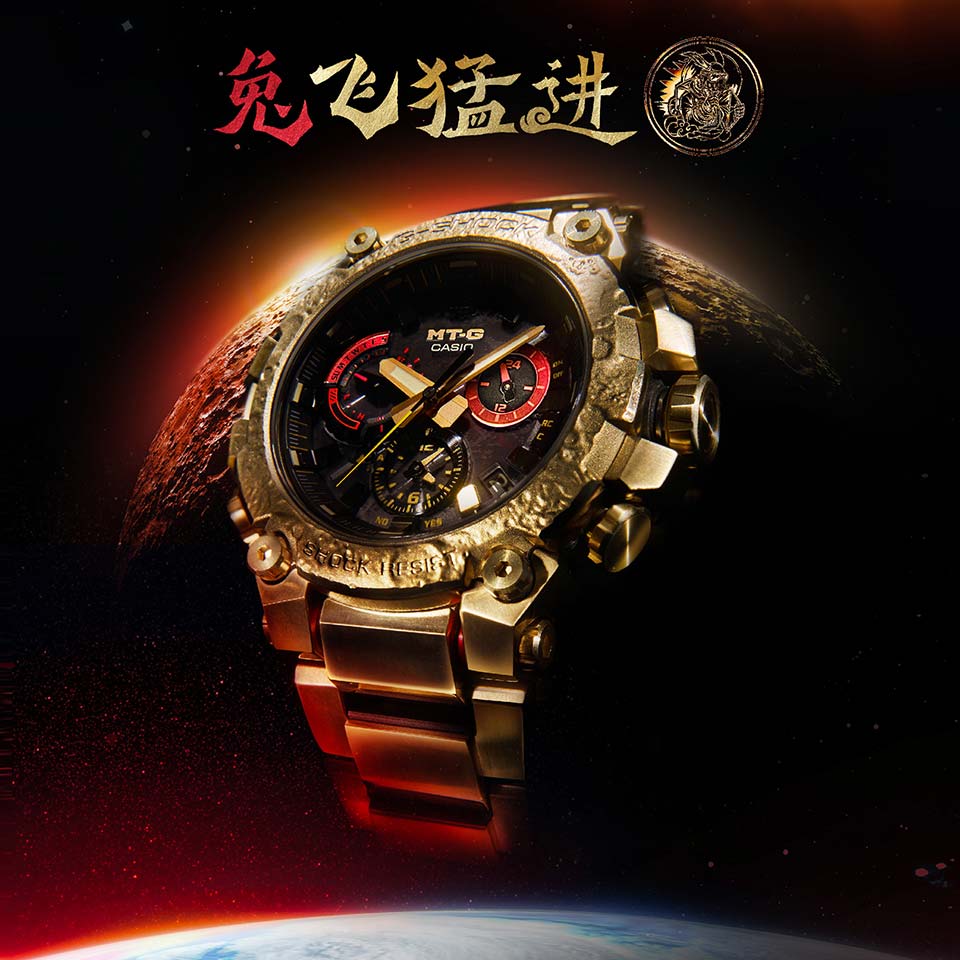 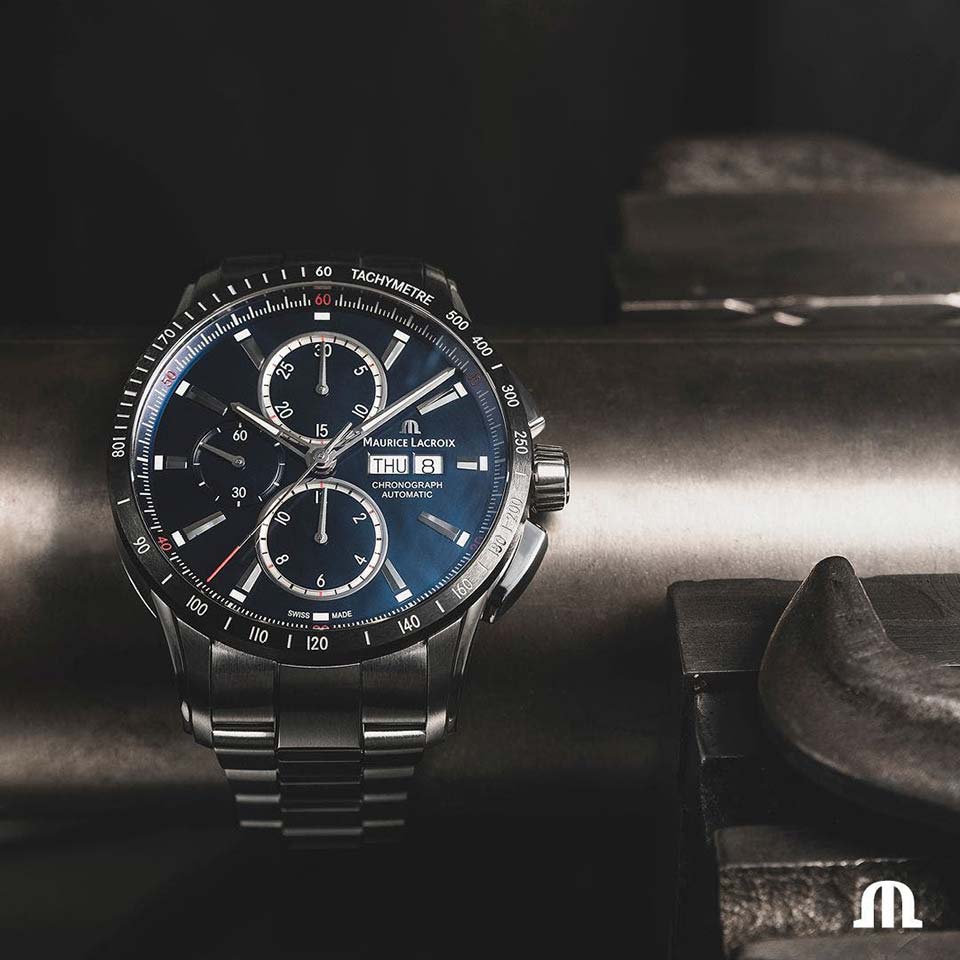 Watch Maurice Lacroix PONTOS S Chronograph
Maurice Lacroix presented a new interpretation of their
16
We use cookies on our website to give you the most relevant experience by remembering your preferences and repeat visits. By clicking "Accept", you consent to the use of ALL the cookies.
Don't sell my personal information.
Cookie SettingsAccept
Manage consents